The Red Sox were terrible, but David Ortiz was awesome. Again.

In his age-38 season, David Ortiz continued to do what he does best.

Share All sharing options for: The Red Sox were terrible, but David Ortiz was awesome. Again.

Topping David Ortiz's 2013 was basically an impossible task, even for someone who does the impossible as often as David Ortiz. He produced one of the greatest age-37 seasons of all-time, finishing with a .309/.395/.564 line that was good for a 159 OPS+: that put him in the company of players like Tris Speaker, Edgar Martinez, Tony Gwynn, Willie Mays, Honus Wagner, and more. Big Papi won the World Series MVP for the Red Sox on the strength of an OPS that just missed cracking 2000 in the Fall Classic, and he celebrated with a bottle of champagne that cost more than one of his teammates earned that year.

Expecting to top that is asking too much, but to stay on the same trajectory? Ortiz can do that, and did, with his 2014. While his average slipped, Ortiz still managed a .263/.355/.517 line with 35 homers -- the most he's hit since 2007, when he was still just 31 years old -- and finished with a 143 OPS+ that actually improved his career rate in that stat by a point. Yes, Ortiz didn't hoist a championship trophy or bat almost .700 in the World Series again, but in his 18th season in the majors, he still managed to improve his career numbers with his performance.

His season was again one of the best ever for a player his age. Ortiz's 143 OPS+ ranks 11th among the 103 38-year-old major-league players who have qualified for a batting title. He missed cracking the top-10 by just one point of OPS+, as Honus Wagner was at 144 with his 1912 season, but he's still ahead of plenty of Hall of Famers and impressive names on this list.

Darrell Evans, Rico Carty, and Pete Rose are the only players here (besides the still-active Ortiz, of course) who aren't enshrined in Cooperstown, and Rose would be with his career performance if not for his penchant for gambling on baseball. A great season at 38 isn't enough to put you in the Hall, obviously, but many of the all-time greats just keep on producing even during the time in their career when they should be slowing down. While we might not all agree about whether Ortiz is a Hall of Famer, it's clear he's one of the great old players of all-time, as every season he puts up numbers that place him on some pretty exclusive age-related lists.

Speaking of lists, Ortiz managed to jump up the all-time home run rankings a few spots in 2014. He began the season tied with Cal Ripken for 46th place all-time with 431 homers, but after 35 dingers, jumped all the way to 33rd, just two behind Chipper Jones. He passed Andruw Jones, Juan Gonzalez, Paul Konerko, Jason Giambi, Dave Kingman, Vladimir Guerrero, Jeff Bagwell, Carl Yastrzemski, Adam Dunn, Jose Canseco, and Dave Winfield, and the list is almost as exhaustive -- and more impressive -- for what he might do in 2015. 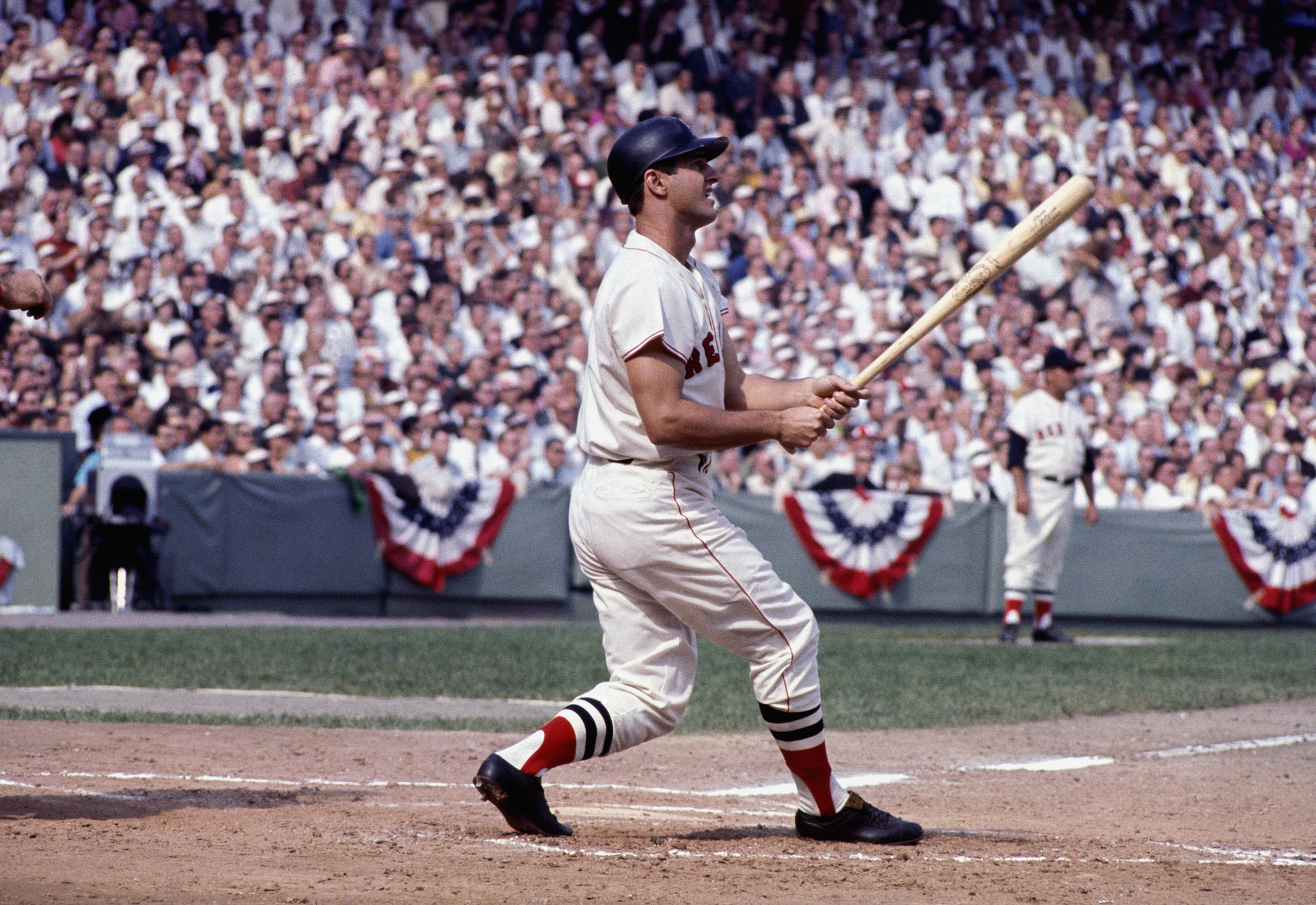 Yaz had his share of great seasons, young and old, for the Sox. (Photo credit: Getty)

It will be difficult for Ortiz to move into the top-25 all-time with 2015 alone, as he's 43 homers behind Gary Sheffield's 509, but he can still make significant progress towards that goal. Lou Gehrig hit 493, and is in 27th all-time -- if Ortiz hits 28 homers next season, he'll take over sole possession of that spot. On the way there, he would pass Jones, Carlos Delgado, Willie Stargell, Stan Musial, and Fred McGriff, as well as Gehrig. After that, both 500 career homers and the top-25 would be in sight, even if his age-40 season in 2016 turns out to be poor, injury-shortened, or what have you.

He struggled at the start and it obscured things, but Hassan's 2014 was a huge step forward.

The season is over, so we know where the Red Sox are going to pick in next summer's draft.

Hitting 500 homers isn't the ticket to Cooperstown it used to be, but any feather Ortiz can stick in his cap is a welcome one when it comes to Hall of Fame credentials. Papi will have to keep on succeeding in order to move that needle, though, but it's Papi: at this point, it's hard to believe he even can fail until he actually does. That day will come, however, whether it's in 2015, 2016, or beyond, as no one can play baseball at a high level forever. Many of the names mentioned in this space were great into their late-30s, but suddenly just couldn't do it anymore. Derek Jeter, who was -- at least performance-wise -- a joke in 2014, his final season, led the American League in hits when he was 38. He then produced a 73 OPS+ from that point forward. Frank Robinson, who is right behind Ortiz on that age-38 list, played just 85 more games over the next two years, and batted .224/.329/.358 in his final campaign. Frank Thomas hit again at 39, but could only muster 71 games at 40: they were a productive 71 games, but it was still less than half-a-season, and then he was done.

Will 2014 be Ortiz's last great season? It's impossible to know. His batting average on balls in play was just .256, suggesting there is room for him to actually improve -- at least superficially -- at 39, and he managed to strike out under 100 times on the year despite having yet another birthday. With that being said, his season ended with a wrist injury -- one considered worse than the 2008 wrist problem that nearly derailed his career -- so these things can change in a hurry. Appreciate every great David Ortiz moment while they still exist, starting with those he produced in an otherwise dreadful 2014 for the Red Sox.