Who's the Red Sox' next Hall of Famer?

When will there next be a Red Sox cap on a new Cooperstown inductee?

Share All sharing options for: Who's the Red Sox' next Hall of Famer?

With Hall of Fame voting done and the results announced, we can relax for a bit and forget about Cooperstown for a little while. Or, we can use it as an easy excuse to think about the great Red Sox of recent memory. Who's the next one who should get a speech ready? (We'll keep the discussion to players likely to wear a B on their cap once they get a plaque, so no Adrian Beltre or John Smoltz.) We'll start with the obvious pick, and then move on to a few more borderline players.

He's on next year's ballot, and he'll fly in. No questioning of this, he's a lock. A LOCK! I mean this sincerely: if Pedro isn't a Hall of Famer, then burn the damn thing down and start over. He's one of three starters ever with a K/9 over 10; his 2014 ballot-mate Randy Johnson and Kerry Wood (sigh) are the others. There have been 14 seasons of a 200 ERA+ or higher turned in by a starter since 1970. Pedro has five of them. (Last guy to do it: Zack Greinke, in 2009.) There's a very short list of pitchers in the conversation for Greatest Ever. Pedro Martinez is on it.

So, with Pedro in next year barring meteors, who of the last decade's Sox have a ticket to Cooperstown waiting? We'll start with guys on the ballot or soon to be, and move on from there into the current roster. I'll be referencing Jay Jaffe's JAWS system, although of course all opinions after are mine.

Schill just had his second year on the ballot, and actually saw his support drop by almost ten percentage points, from 38% down to 29%. This is... silly. JAWS has Schilling at 27th all-time among starters, well over the standard, and his 3116 strikeouts and 4.38 K/BB alone should put him in heavy consideration. His ridiculous postseason numbers put him over the top. I'll be fascinated to see how Schilling does next year, now that Jack Morris is off the ballot. Schilling is the clutch postseason ace everyone thought Morris was. It'll be fun to see if people realize that. He'll get in, it just might take a while. 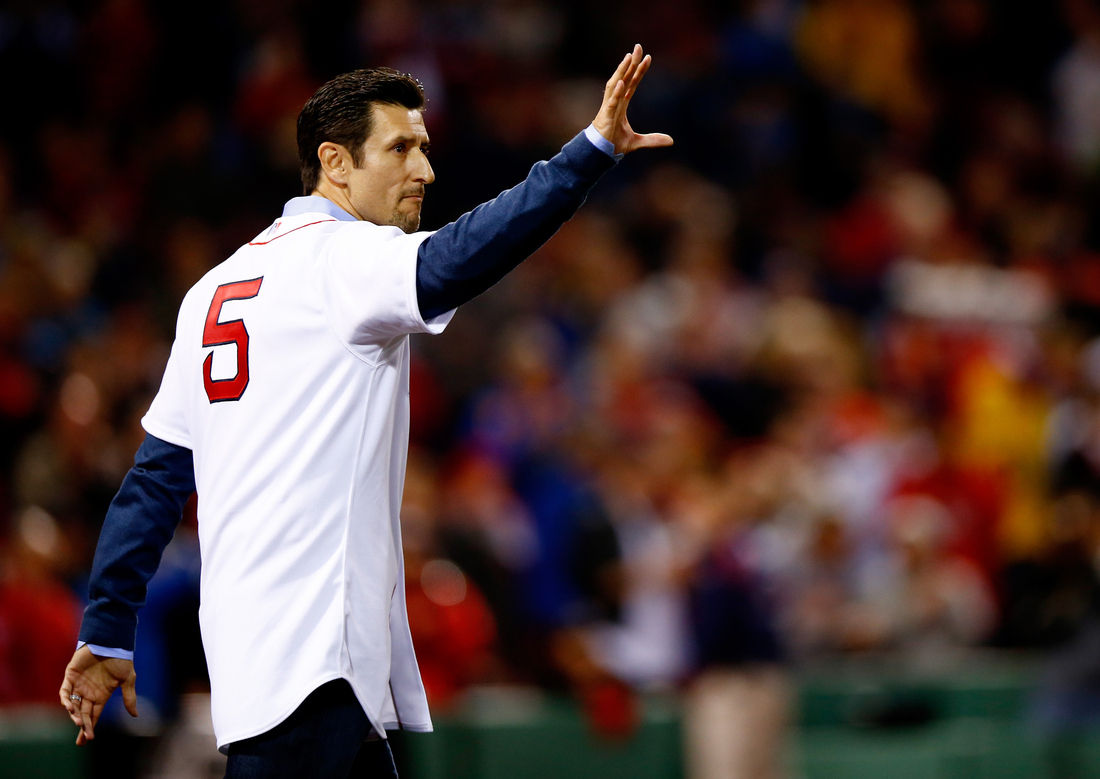 Sigh. Nomar's going to be on the ballot alongside Pedro, and that's I think how all of us will remember him. Boston fans had the rare privilege of seeing two absolutely elite talents at once in the last few years of the 1990s, but like most things it didn't last. At Nomar's peak, there was no pitcher he couldn't hit, no offering he couldn't turn into a scorching line drive. The discussion among Sox fans wasn't whether he'd hit .400, but when. Then the wrist went, and with it the quick bat, and that was that. The worst part, in terms of the Hall? Nomar's still 25th all-time in the JAWS rankings at short, and his peak WAR is 13th, just below Barry Larkin and two spots ahead of Derek Jeter. Life's not fair, kids, no matter what they tell you.

They'll be on the ballot together in 2017, which seems right. But neither will last long on it. Much as we all love Tek, nope. He had a few great years, he commanded the respect of his teammates on a few championship teams. He apparently called games better than anyone, and we haven't fully quantified that yet, but still. Just not an all-timer. Wake's the same story. He logged a lot of pretty good innings (at the same career ERA+ as Jack Morris, actually...), and he served in whatever role Boston needed for 17 years. Valuable, not Hall of Fame. Each retired with a pair of rings and an obvious spot in the team Hall of Fame. Not bad for a couple of castoffs.

That's the retired players, let's move on to the actives: 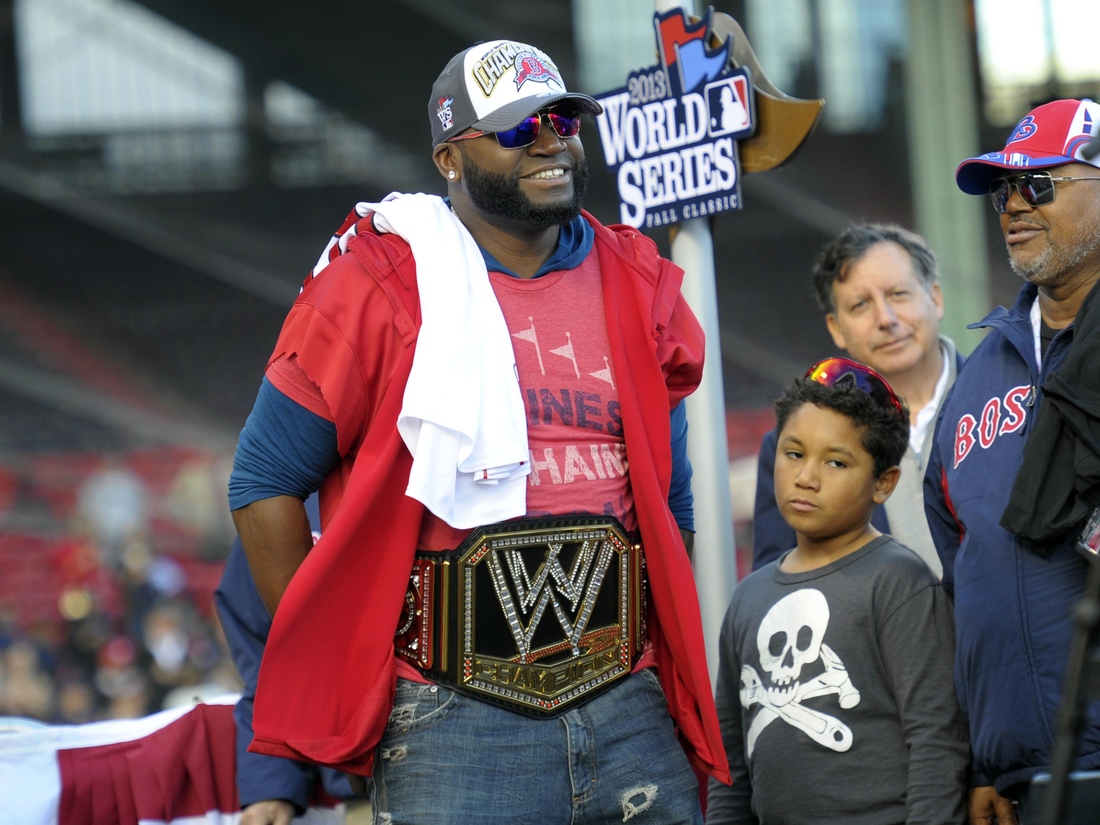 I'm terrified of this Hall debate, actually. On the metrics, he's a bit shy. JAWS has him at 36th all-time among first basemen (there's no DH ranking), well below the standards. He was never the pure perfect hitter at the plate that Edgar Martinez or Manny were. And the things that will work best for him with old-school writers (clutch playoff hitting, good quotes, TEH FEAR) are matched by things that will hurt him with those same writers (DH, sometimes critical of writers, some PED rumors). My gut says that another year or two of power production, plus the three rings, will get him in. But I really have no idea.

This'll be a fun one in a few years. Pedroia's a good, not great hitter, although a good, not great hitter at second base is really valuable. He's a good baserunner, and an elite defender, at a time when we're finally starting to figure out quantifying fielding. JAWS has him 29th among second basemen, and with another five years of solid performance, he'll certainly climb into the discussion on the statistical merits. Throw in the rings, the MVP, and the overwhelming reputation for grit and hustle, and he should get plenty of support when his time comes.

The alternating great and mediocre years in Boston were bizarre, and it ended pretty badly. Beckett will get some down-ballot votes based on his stellar 2003 and 2007 postseasons, and that'll be about it.

Lost most of 2010 and most of 2012, which kills his cumulative value. He might well rack up a few more good years with the Yankees, but it won't be enough to get into the Hall. Fun tidbit: he's ranked 116th all-time in JAWS for center fielders, one spot ahead of Mike Trout. Mike Trout is terrifying, is what I'm saying.

Why do we care about the Hall of Fame?

My, but the baseball internets have been loud lately, must be about Cooperstown.

Why do we care about the Hall of Fame?

It's kind of wild looking back and realizing exactly how dominant a closer Pap was. But he was only dominant for six years, his peripherals are tanking down in Philly, and the standard for relief pitchers is (and should be) crazy high. Solid case for greatest reliever in team history, but that's about all.

Yes, Jon Lester. He's already off to a nice start with the benchmark counting stats. If he stays with the Sox, and keeps pitching well into his late thirties, he could certainly hit 200 wins. He's already had several dominant postseasons, and given Boston's farm, odds are good he'll have more. I could easily imagine Lester being a borderline candidate like Andy Pettitte in a decade, one of those guys who wasn't ever the ace of the league, but pitched very well longer than anyone else. (Without, of course, the PED connections.)

Frankly, I'd be stunned if they're not casting the plaque already.