Projecting the next wave of Red Sox prospects: Pitchers

We already know all about the incoming wave of Sox prospects, but what about the guys coming after that?

Share All sharing options for: Projecting the next wave of Red Sox prospects: Pitchers

Continuing with where we left off on Wednesday, it's time to look at the next wave of Red Sox prospects. No, no, not Henry Owens, or Blake Swihart, or Matt Barnes, or anyone like that: we're talking well off into the future, the wave that's scheduled for a few seasons after the major-league debuts of the above group.

Remember: just because a prospect has potential doesn't mean they'll meet it, and some players might end up being even better than anticipated, too. The important thing is having lots of prospects in the lower minors, so that, if a significant number of them fail, the system is still producing something. If you don't have plenty of lottery tickets, you can end up like the Red Sox of 2010-2012, where little-to-no assistance came from the minors, and a reliance on big-money free agents and trades helped sink them.

As we already discussed the large group of position prospects who could comprise that wave, we can move on to pitchers, where the Red Sox' real strength lies. 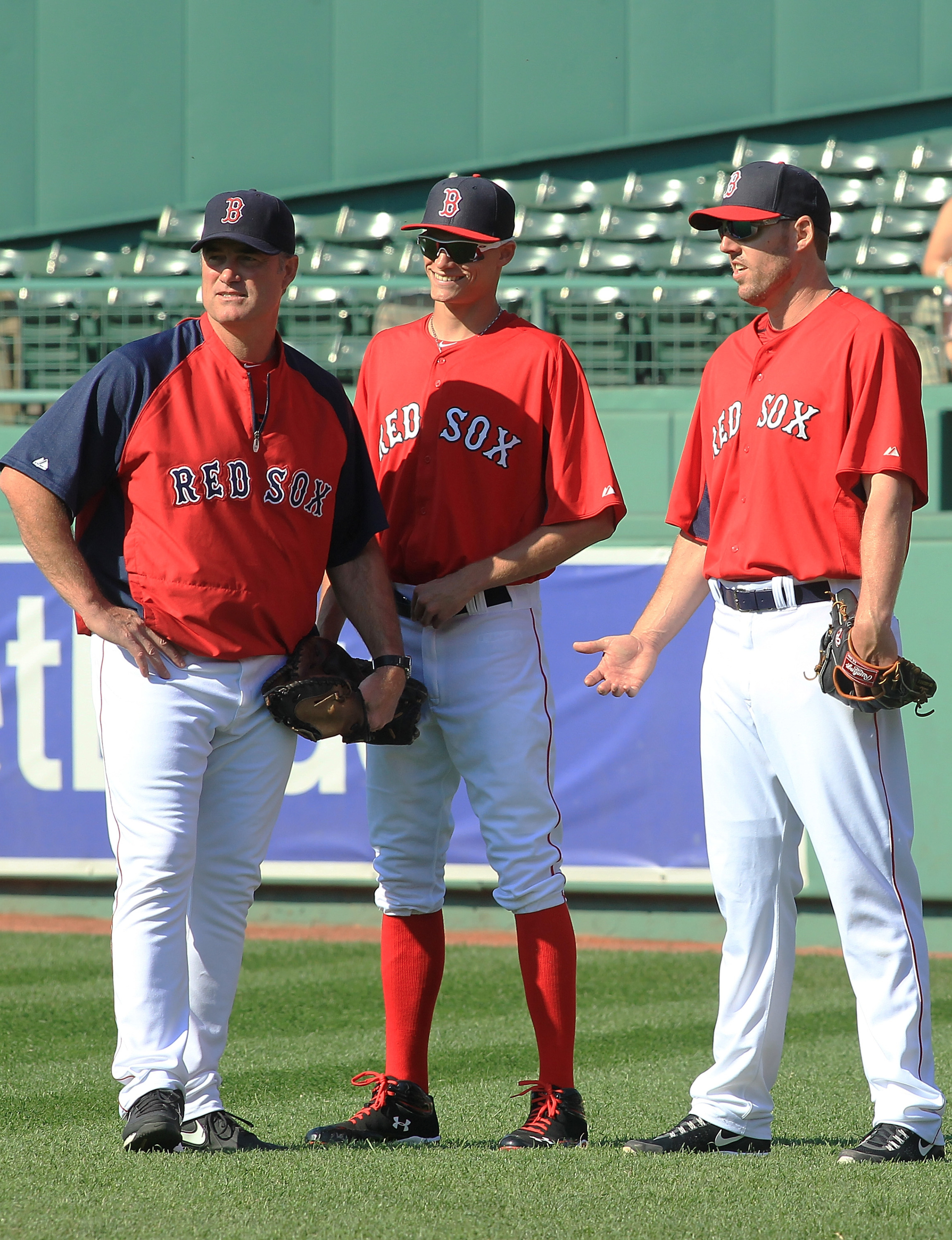 The top starter in the lower minors is without a doubt Boston's first-round pick from the 2013 draft, left-hander Trey Ball. Selected in the seventh spot, the Sox' earliest pick in the draft since 1993, Ball is 19 years old and already 6-foot-6, with an advanced change-up with potential to be a plus pitch, a fastball that can touch the mid-90s already, and a curveball that's better than it should be considering he wasn't even allowed to throw it until late into his high school career. Ball is one of the few arms in the system with the potential to be a legitimate number two starter, and while he's a long, long way off from realizing said potential, the Red Sox are so overloaded with pitching prospects at the top, and have enough years of the likes of Clay Buchholz and Felix Doubront left in the majors, that it's not necessary for Ball to be ready anytime soon.

Ball is one of four pitchers selected by the Red Sox in the 2013 draft that could play a significant role in Boston's future. Teddy Stankiewicz was selected out of junior college with Boston's second-round pick, which gives him a fascinating combination of youth -- he'll be all of 20 in 2014 -- and experience against better-than-high-school competition. He's believed to be a mid-rotation arm, one with a bender that could turn out to be plus, a low-80s change, and a fastball that can touch the mid-90s. He doesn't have to be anything more than that to be useful as a major-league pitcher: please remember how much money is being thrown at the likes of Ricky Nolasco and his inconsistent ilk these days.

In the fourth and fifth rounds, the Red Sox added two more pitchers with worthwhile big-league promise. Myles Smith is a right-hander selected in the fourth, who has very little mileage on his arm at this point since he was also a shortstop before transferring colleges. The Sox think highly of Smith, with amateur scouting director Amiel Sawdaye citing his athleticism and the fact his arm is still like that of a 17-year-old as reasons to be excited about his future. Baseball America agreed, ranking Smith #108 on their pre-draft top-500. He's so raw that it's hard to tell just what he'll be, but he's yet another potential mid-rotation arm, should his pitches continue to develop and his command picks up.

Corey Littrell was the fifth-round pick from last summer, and the 6-foot-3 lefty is expected to move through the organization quickly: Sox Prospects actually has him projected for High-A Salem's roster, which would mean the 2013 draft pick would skip Low-A Greenville entirely after a brief stint in the New York-Penn. Littrell has a wide array of pitches, with a high-80s/low-90s fastball complemented by a change-up, curve, and slider, with the change the best of those offerings. Baseball America rated Littrell the #130 draft prospect a year ago, and expects him to be a big-league starter.

Red Sox general manager Ben Cherington was stockpiling pitchers before 2013. In the 2012 draft, Boston picked up Jamie Callahan in the second round, and Ty Buttrey in the fourth. Callahan is now 19 years old, just removed from his stint as the youngest arm in the New York-Penn League, where he alternated between utter dominance and the kind of inconsistency you expect out of someone his age. He needs to work on having consistent arm speed and control of his pitches -- again, like most pitchers his age -- but there is a future as a big-league starter here.

The same goes for Buttrey, who might actually be a better arm than Callahan, despite being selected a couple of rounds later. Buttrey fell due to signability issues, and the Red Sox were able to afford him in part by selecting a large number of college seniors who could be inked for small bonuses, with the money those slots could have been paid given to Buttrey instead. He's 20 years old, and already built like a right-hander power arm at 6-foot-6 and 230 pounds. While he didn't strike out many batters while pitching for the Lowell Spinners last summer, Buttrey has the stuff to rack them up with more experience, thanks to a potentially plus knuckle curve and a change-up that remains a work-in-progress.

They could both end up being mid-rotation arms, but again: with the cost of pitching what it is on free agency, in terms of both compensatory draft picks, dollars, and years, loading up on as many mid-rotation arms as possible to complement the better ones like Ball, Owens, and so on should be a highly effective strategy that allows for financial flexibility.

You know who the top Sox selection is, but you're likely to be surprised by the rest of the order.

Pedroia: Sox should give Ortiz 'whatever he wants'

David Ortiz wants an extension, and Dustin Pedroia thinks he should get one.

Keith Law ranks 7 Red Sox prospects in his top 100 Pedroia: Sox should give Ortiz 'whatever he wants'

This also isn't everyone. Daniel McGrath was signed out of Australia this time last winter, and the teenage southpaw pushed through the GCL and into the New York-Penn league in his first season. He's young enough and inexperienced enough that he might go back to short-season ball again in 2014, but it'll be as the most important pitcher on Lowell's staff, instead of just one of a bunch of young arms with potential. He's almost entirely projection at this point, as it's expected he'll add velocity as he develops, which in turn could help his secondary stuff become more effective, but you have to like a tall lefty with an array of pitches at his disposal already despite his youth.

Signed one year before off the international market is Simon Mercedes, a Dominican right-hander who struck out over eight batters per nine and over three times as many as he walked as a 21-year-old at Lowell last summer. Almost all of his pitches are of the work-in-progress variety, and his command isn't his strong suit, but Mercedes throws a fastball that hits both the low- and mid-90s -- if he can figure out another pitch, he could be a devastating relief presence, if nothing else. If he figures out both his curve and his change-up, then we're talking rotation.

The last of the notable pitching prospects is Cody Kukuk, a holdover from the Theo Epstein regime. He was Boston's seventh-round pick in the 2011 draft, who missed his first professional season due to a DUI that was later dismissed. The 20-year-old southpaw is 6-foot-4, with Sox Prospects saying he has the "frame to add more strength". He has a low-90s fastball, a slider with plus potential, and is working on a change, and made strides in his control over the course of his first full season in 2013. Like so many others you've read about today, Kukuk has mid-rotation potential -- it just might take awhile. Not every tall lefty can be Henry Owens, you know.