Projecting the next wave of Red Sox prospects: Position players

We already know all about the incoming wave of Sox prospects, but what about the guys coming after that?

Share All sharing options for: Projecting the next wave of Red Sox prospects: Position players

After a few years with little help from the farm, the Red Sox are expected to graduate multiple prospects for good in 2014, kicking off a wave of homegrown talent that will, if things go to plan, form the core of what general manager Ben Cherington likes to refer to as "the next great Red Sox team." If you've paying attention over the last couple of years, you know that, though, as the likes of Xander Bogaerts, Jackie Bradley Jr., Matt Barnes, Henry Owens, Allen Webster, Blake Swihart, and so on are very familiar to you.

Since you're already aware of those and other similarly scheduled prospects, let's skip that whole group, and move on to the next. After all, waves of prospects are the only thing that will make the current Red Sox plan of lightly leaning on free agency while avoiding mega-contracts palatable: if Boston can't develop a core and contributing pieces on their own, then it's much more difficult to focus on mid-range free agent deals if the plan is to continually compete. Luckily for the Sox, at present, it looks like there is another wave, one mostly built during Cherington's time as GM, ready to come in a few years after the present-day wave rolls on in.

Let's not get too ahead of ourselves: as these are prospects, and many of them are in the lower levels, it's very difficult to know just where their careers will end up. Some will surpass expectations, some will meet them, but plenty more will fail to realize their potential, too. The Sox have stockpiled so many young prospects, though, that it's safe enough to take a peek at a possible future, starting with the position prospects.

While there is no Xander Bogaerts here, you didn't expect to see one, either: Xander is special for a reason. There are still plenty of prospects loaded with ceiling and potentially bright futures in the lower levels, however, with the jewel of the wave being center fielder Manuel Margot. He's all of 19 years old in 2014, and just batted .270/.346/.351 in the New York-Penn League, where the average hitter was 21 years old with a .242/.313/.338 line. Offense isn't Margot's specialty, though: he has plus-plus speed, and scouts believe he could become a well above-average defensive presence in center despite a weak arm. While Sox Prospects believes he could take time to develop, they also state that Margot has potential to be a top-of-the-order hitter for a first-division team. It's far too early to know for sure, but Margot is easily the one to watch from the lower levels if you could choose only one. 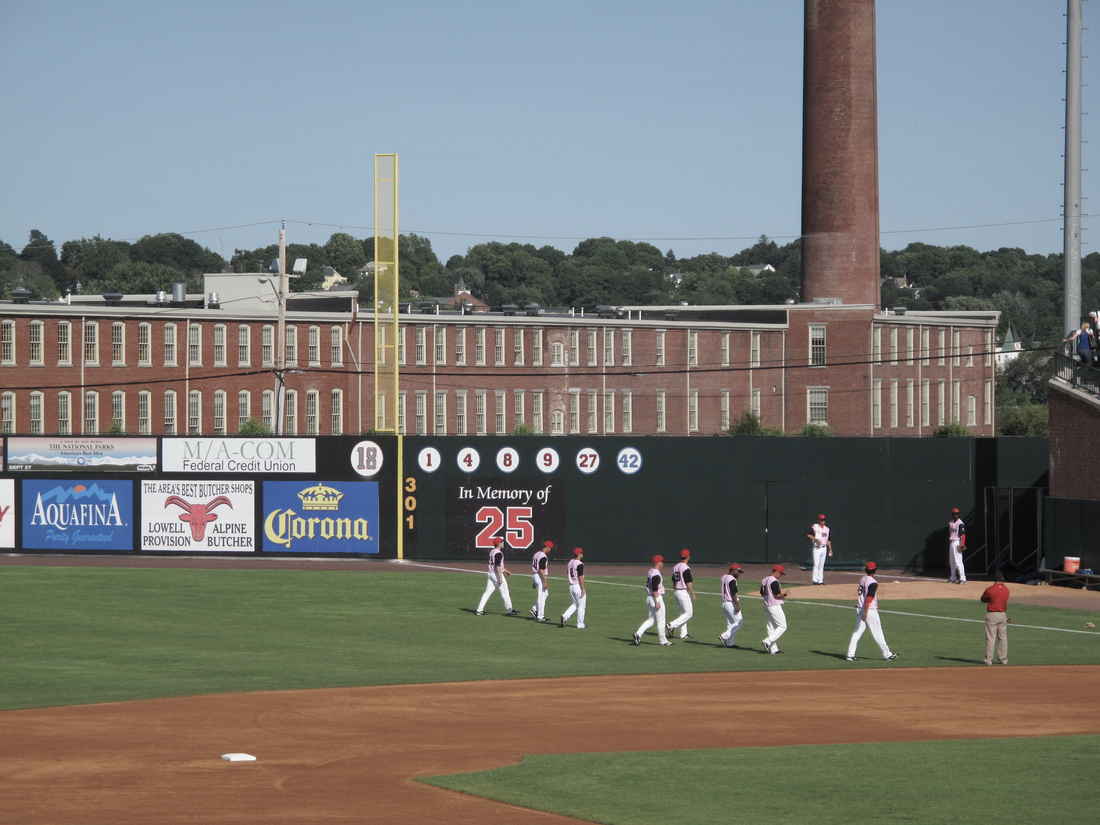 You'll see most of these prospects in short-season Lowell this summer. Photo credit: Wikimiedia Commons

There are plenty of others, though. Wendell Rijo hit well in the Gulf Coast League in 2013, despite still dealing with the after effects of a torn ACL. He's expected to jump to the Spinners for 2014, further removed from the injury, and Baseball Prospectus believes that he's going to be a legitimate prospect sooner than later, listing him as a prospect on the rise in their latest rankings of the Sox farm.

Another prospect with that designation is Boston's most significant international signing of 2013, Rafael Devers. His swing was described by BP's Jason Parks as "one of the sweetest swings I've ever seen from a 16-year-old", and he compared the bat speed to that of Robinson Cano. Now, Devers isn't going to field like Cano, and he's already got a body that tells you he's going to be all bat, but there is the potential for so much great hitting here. He already has a precocious approach at the plate, and as he gains more experience and grows, he could develop plus power, too. He's a third base prospect for now, but could end up moving to first, and while you don't necessarily like to have first base prospects since they're already low on the defensive spectrum, if they have plus power and a sound approach, then it can work for you just fine.

Xander Bogaerts gets the love, but there's plenty of help behind him, as Law can attest to.

The journey of Jair Bogaerts

While Xander Bogaerts has already won a World Series, Jair Bogaerts is ready to take on the challenge of succeeding in the competitive world of sports agency.

Something of a sleeper in the system is 21-year-old Henry Ramos, who used to play soccer and only became a full-time baseball player when he went pro. His numbers don't jump off the page at you, but he's highly athletic with developing baseball skills: there might be room in the Red Sox outfield for him by the time he's turned those skills into on-field production. He's still very raw on both sides of the ball, but if his power continues to develop, and he can become smarter about his pitch selection, there is going to be a major-league hitter here.

The 2013 draft added a couple more intriguing position prospects into the fold. Jon Denney was selected in the third round despite ranking #25 on Baseball America's top-500 draft prospects list. While he's a catcher now, he's athletic enough to move to an outfield corner should his defense not develop properly, or if there's no place for him behind the plate by the time his bat is ready for the bigs, and Baseball America says he'll have the bat for first as well. It's worth pointing out that Denny is all of 18 and already has shown some serious power at high school, and while his pro debut was a little quiet, it's far too early to show any concern for his future.

Much later in the draft, the Sox selected Nick Longhi. The outfielder ranked #296 on Baseball America's top-500, and didn't even turn 18 until two months after the draft. The scouts who like Longhi love him, as he was considered a pick for the first five rounds by some. He fell to the 30th round due to signability issues, where Boston was able to draft and sign him by giving him the fourth-largest bonus of any of their selections, at $440,000. That tells you that Boston's scouts are some of the ones who believe in Longhi's corner outfield bat, and while he's got a long way to go with his youth and lack of college baseball experience, there is potential here for a legit player.