Being careful on free agency is one thing, but Boston can more than afford a Jon Lester extension.

Share All sharing options for: Jon Lester isn't too expensive for the Red Sox

The Red Sox have roughly $96 million coming off of their payroll before the 2014-2015 off-season. That figure comes courtesy of WEEI's Alex Speier, who is always on top of Boston's competitive balance tax (CBT) calculations, and is due to the mass exodus of free agents leaving the club in a year's time -- free agents who will likely be replaced internally, or for a similar price on the free agent market. This massive figure is the reason why it's nigh impossible for a Jon Lester extension to be too expensive for the Red Sox.

There is a good chance that Lester will command at least $20 million annually over a five- or six-year deal, taking him through his age-35 or age-36 season. While that's a significant amount of money, not one to be taken lightly, it also barely puts a dent in their available funds over the next few years. And, in this day and age, where Felix Hernandez, Justin Verlander, and soon Clayton Kershaw will all take turns setting the record for money in a pitcher contract by living around and over the $200 million mark, something in the $120 million range isn't what it used to be in terms of scope and size.

Think of it this way: what else can the Red Sox spend on besides Lester? Kershaw is a better pitcher, sure, and younger, too, but he's also going to command a decade-spanning contract, and possibly one at a higher average annual value on top of that. Max Scherzer seems a likely candidate to pull in more money than Lester as well. This assumes, of course, that one or both of these pitchers even makes it to free agency a year from now, as extensions have been a point of discussion for both over the last few months. The only other pitcher of Lester's talent or better who could be available as a free agent is James Shields, but he'll likely cost a first-round draft pick and won't be any cheaper than the pitcher the Sox are already familiar with, rendering that chase pointless unless Lester has already signed elsewhere.

Pitchers of lesser quality than Lester can likely just graduate from the upper levels of the farm system, where the likes of Anthony Ranaudo, Allen Webster, Matt Barnes, Brandon Workman, Rubby De La Rosa, and Henry Owens reside. Otherwise, the Sox would be getting involved in negotiations for pitchers like Brett Anderson, Dan Haren, Chad Billingsley, Brandon McCarthy, Wandy Rodriguez, and more at this level. There's nothing wrong with those pitchers, but when perpetually below-average Ricky Nolasco can sign a long-term deal for nearly $50 million in his first crack at free agency, then, assuming health, all of those starters are going to make bank. At that point, why wouldn't you just roll the dice with the known quantity with the right combination of age and upside in Lester to avoid that situation and its various question marks altogether? 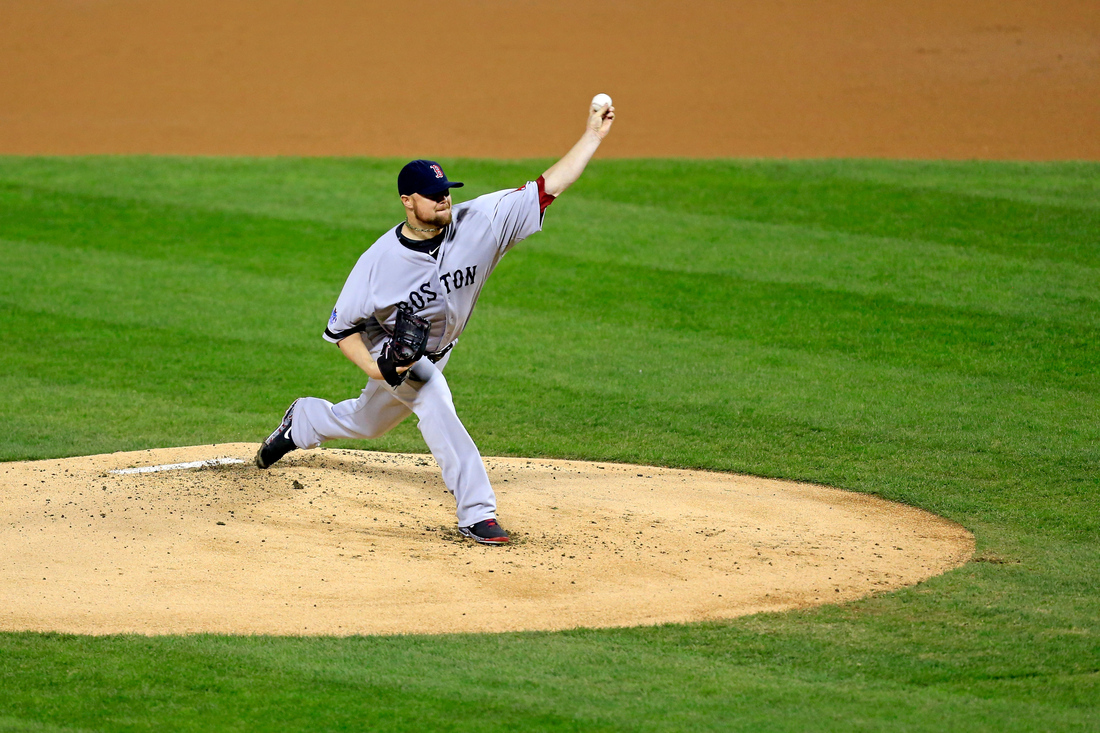 The Red Sox could spend on hitting instead of pitching, but that's not an attractive proposition, either. For one, the Red Sox are already set for 2015 in that regard, with designated hitter and backstop the only open spots. David Ortiz could be re-signed for one more year, fixing one problem. Catcher shouldn't be an expensive endeavor, either, with Christian Vazquez possibly big-league ready a year from now and the Sox maybe re-signing David Ross to act as mentor and backup. Even if Vazquez isn't ready, it's not as if catchers on short-term deals are expensive, as A.J. Pierzynski's current deal reminds. Other than that, you're talking about finding a replacement for Jonny Gomes, a lefty-mashing bench outfielder. Again, that's not costly to replace.

The Sox could let Lester walk and hope the farm fills his spot, but that assumes a lot about the prospects. Ranaudo and Owens are the only two who consistently get any love as potential No. 2 starter types, and they both have plenty of questions left to answer in their development before we know if that will happen. Boston's strength is more in the number of pitching prospects they have than anything else: they're in the best position of anyone to avoid the exploding mid-rotation market thanks to the volume of starters they have in the minors. That's not the same thing as saying they can avoid spending any money on pitching, as the top of the rotation still remains a question that will need answering, and that, more often than not, means spending.

Plus, in the end, we come back to that one question: where does the money go if not to Lester? You can dream about trading for the Angels' Mike Trout and extending him, but it isn't going to happen, and the prospect price to do the same with Giancarlo Stanton is likely prohibitive. Even if the Red Sox did manage to pull that off, Stanton wouldn't cost $96 million per season. The Red Sox would still have, in theory, about $75 million to play with in 2015 after extending Lester, and again, there won't be that many holes -- possibly any -- the farm system can't simply plug up.

The Red Sox won't sit on available funds: they already stop short of the artificial limit that is the luxury tax threshold, and make plenty of money in the process, and that was before the roster was set to be packed full of pre-arbitration players on major-league-minimum deals. They are in a position where they can be both fiscally responsible and also spend heavily, given how much money is going to be available to them, and Lester looks to be the beneficiary of that. That doesn't mean the Red Sox should go overboard and offer Lester a mega-deal reminiscent of what they passed off to the Dodgers in the summer of 2012, but if they can take care of him the same way they did Dustin Pedroia, who signed a $110 million extension last summer, then there is no financial reason why they should not.

Don't take this to mean they should send Lester a deal right now. Waiting it out a bit makes sense, as a contract agreed to after Opening Day won't affect the 2014 payroll or luxury tax, and seeing how Lester looks coming off of a rebound season with an incredible postseason run wouldn't be the worst idea. In addition, the Sox would get to see, to a degree, where their pitching prospects are at with most of the high-quality ones now at Triple-A, one step from the majors. When the time comes, though, whether it's in April, May, or next November, the Red Sox should easily have the money, both now and later, to make a sensible Lester deal happen and work for both sides.