There's plenty of star power on the Red Sox in the likes of David Ortiz and Dustin Pedroia, but the lesser-known names have been holding their own as well.

Share All sharing options for: Red Sox bench more than carrying its weight

Pinch hitting is not easy. Entering into a game already in full swing, coming up against a reliever whose whole job is to make late-game appearances, and trying to find a rhythm at the plate in just one solitary plate appearance is easier said than done. Generally speaking, a batter's numbers can be expected to take a dip of about 5% when pinch-hitting rather than starting. So far this year, the average MLB hitter has a batting line of .254/.318/.398, while the average pinch-hitter is sitting at an awful .218/.298/.340.

That number looks even worse when you consider pitchers are dragging down the former number, but not the latter.

The 2013 Red Sox are not simply an exception to this rule. They turn it completely, ridiculously on its head. They've only had 62 pinch-hit at bats on the season, but it's hard to imagine making much more of them. With their closest competition, the Seattle Mariners, hitting .300/.344/.500 in pinch-hit situations, the Red Sox sit at an insane .258/.370/.613, a whopping 346 points over the MLB average.

For that, we have the bench to thank, in particular Mike Carp and Jonny Gomes to thank. For that and, frankly, quite a bit more. While the 2013 Red Sox have been led by big performances from the likes of Shane Victorino, David Ortiz, John Lackey, Jacoby Ellsbury, and Dustin Pedroia, there can be no ignoring the difference that the bench has made this year.

WAR will tell you that the difference between having them and having replacement-level players is about two wins, but that's a bit hard to buy when you consider the real alternatives. Replacement-level players are not quite so dime-a-dozen as one might expect, and one needs look no further than the Red Sox for proof of that. Remember the days of Pedro Ciriaco? How about of Brock Holt and Brandon Snyder? Or back to 2011, when Mike Cameron managed to come in at a full one win under replacement in just 33 games played.  And don't even get me started on the Ryans Kalish and Lavarnway in 2012.

Why Quintin Berry is important 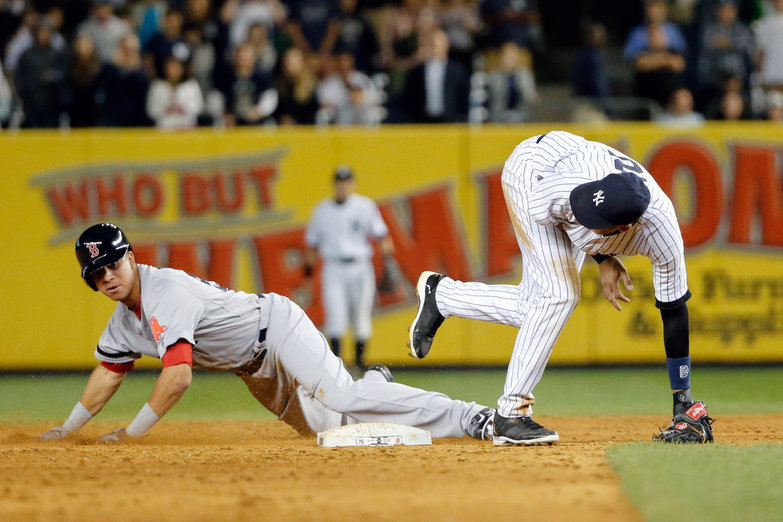 A seemingly small acquisition could pay huge dividends for the Red Sox in 2013.

And now, as the regular season comes to a close, the bench is better than ever. The revival of Will Middlebrooks at third base and arrival of Xander Bogaerts has given the Red Sox a massive upgrade over the likes of Brock Holt, Brandon Snyder, and the long-since departed Pedro Ciriaco, who combined for a -1.3 fWAR earlier in the year. And while Jackie Bradley Jr.'s numbers took a beating in April, he looks improved at the plate and brings, as always, an exceptional outfield glove--though at least for now he's going to have to take over a starting role. Toss in John McDonald for late-game infield defense and Quintin Berry for pinch-running, and you've got a unit well-equipped to respond to most situations leading up to the playoffs.

Unfortunately, it won't last forever. While there are some scenarios which see the Red Sox bringing back both Jacoby Ellsbury and Stephen Drew, they are few and unlikely. In all likelihood the Red Sox will once again be looking for a middle infielder to take over for Xander Bogaerts as he makes shortstop his home, and Jackie Bradley Jr. is almost as likely to take over for Jacoby Ellsbury in center next year.

But at least that pinch-hitting core in Mike Carp and Jonny Gomes will persist. Gomes has one more year left on his contract, and Carp hasn't even gone to arbitration yet. With Shane Victorino acting as centerfield depth, the Sox can afford to not have a rangy outfield glove on the bench, even if it leaves Daniel Nava (who is only not mentioned here because he's the de facto starter) playing right on occasion. It's an unusual luxury for an American League to have, particularly at the price of $5 million for Gomes. But one the Sox can afford to indulge in.