The Red Sox just lost a heart-breaker to the Yankees in New York. One cheap 0-2 dinker from Ichiro and a wild pitch later (what kind of pitch was that, anyway?) and the Yankees walked it off. So why am I smiling?

Share All sharing options for: The 2013 Red Sox season: Counting the good

There are some days when things just don't go your way. The kids are sick, you have a headache, the cat pukes on the carpet, there's a wasp in the kitchen, the toilet overflows, the car won't start, and your coffee has mold in it. And that's before you even get out of the house in the morning. The universe can be a cruel mistress, smacking you across the left cheek and then, when you look to the left, clubbing you in the right cheek with a lead pipe. Just for funsies.

As bad as those days are -- and they really are bad -- that they happen means the converse can occur as well. When you step back and look at this 2013 Red Sox season, well, it's really quite amazing how many things have gone right. Let's try and count them all, shall we? (Yes, we shall.)

After last year and the year before (and even the year before that), that this team could be in first place in early/mid-September kinda blows my mind. Okay, yes, I'll toot my own horn and say I called it, and I did, but seriously, what did I have to lose? My reputation? My dignity? Ha ha ha! (Also, check out my AL West prediction. Can't win 'em all.) Me me me me. Point is, the Red Sox are in first place and that, despite one silly prediction, is a surprise.

Every off-season move has worked

Okay, that's not quite true -- Joel Hanrahan says hi -- but it feels that way. And really, a hit rate this high? Cherington should be carried from his office to his Fenway box each day by butlers with butler-ish sounding names (like "Reginald") wearing white gloves. Let's run down the list! And because I can't get this numbering formatting to work properly they're all going to get their own number!

Dempster hasn't been an ace, but he wasn't signed to be one. He's been an innings-eater, and sometimes that isn't pretty, but eating lots and lots of the same thing rarely is. Also, the Red Sox are 16-11 in games Dempster pitches in. That's not solely because of Dempster, but it is at least partially because of him. Baseball Prospectus has his value at just under a win, and Fan Graphs has him at just under a win and a half. He's not been pretty (I know I already said that but really he hasn't been pretty) but he's done the job the Red Sox signed him to do, by keeping the likes of the not-quite-ready Allen Webster off of the big-league mound.

Napoli is just fun to watch. Most of the time he whiffs, but every once in a while he catches up with one, and man it does it go. So that's the fun part, but the whole of Napoli's game maybe gets lost in his Ruthian swats. He's been very valuable this season. Fan Graphs has him as the sixth most valuable first baseman in baseball. Not just the AL, all of baseball, and he's well ahead ofAdrian Gonzalez (man, does that trade keep getting better and better or what?). Napoli for one year and (eventually) $13 million? One of the best bargains of the off-season.

Since recovering from injuries earlier on in the season, Drew has been on fire. He's been the best Red Sox shortstop since Nomar (though admittedly that's not too tough a group to beat) and for the first time in a long time I don't cringe when shortstop comes up in the lineup.

The party line is that Gomes has a knack for getting big hits. And it seems that way, but I wasn't sure so I looked it up. Let's put that to rest right now: it's totally true. Gomes has a 764 OPS (we're going quick-'n-dirty with our stats here) this season, but put runners in scoring position and he's hitting .348/.451/.580. Make that with two outs as well and Gomes is hitting even better, a .367/.513/.600 slash line. Yeah, he looks... shall we say rough in the left field. But for what he brings to the clubhouse and oh yeah those big hits, hard not to be happy with it. 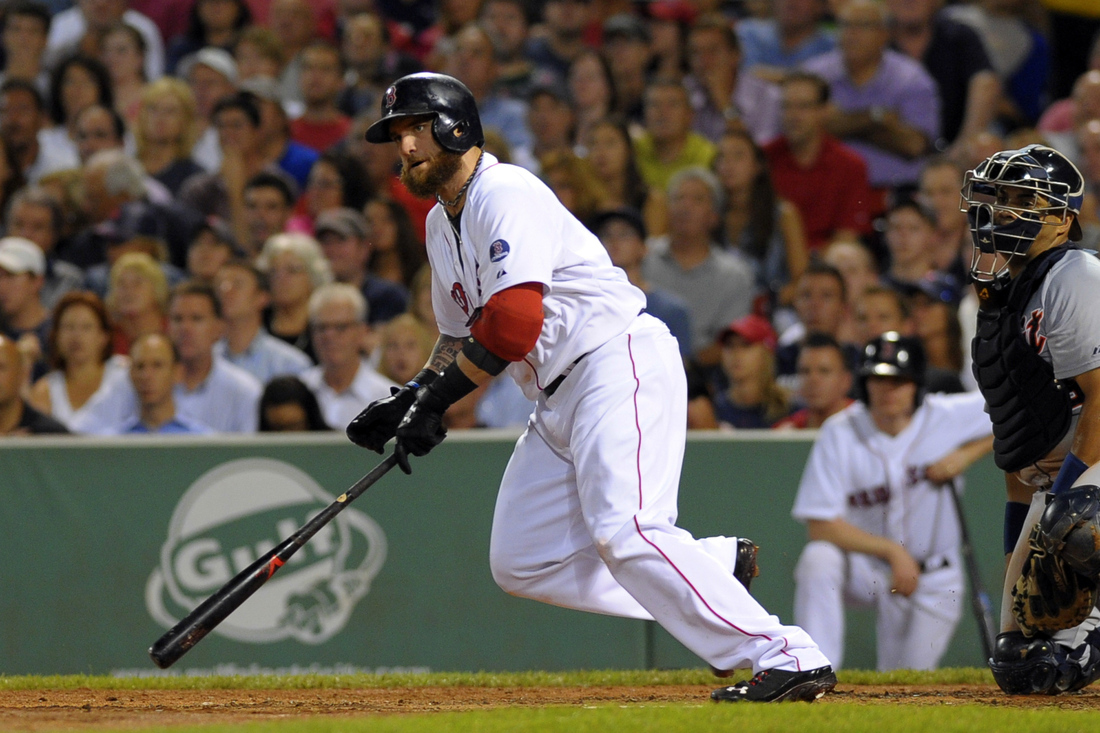 Man, what hasn't been said about Victorino? So many people doubted the three year, $39 million contract he signed, including yours truly, and he's proved everyone (Ben Cherington excepted) wrong. I just wrote about Victorino and his amazing performance after eschewing switch hitting at Sports on Earth. In writing the piece I learned that over the last 30 days, Victorino has been the most valuable hitter in baseball (per Fan Graphs). Not Mike Trout, Miguel Cabrera, Robinson Cano, or Andrew McCutchen. Nope. Shane Victorino. Throw in some amazing defense in right field and it's hard not to call that deal a steal at twice the price without even knowing what we're getting in years two and three.

I couldn't make a list like this and not include David Ortiz. We all know what Ortiz has done, but just to put it into some perspective, according to Baseball Prospectus, Ortiz has the seventh highest True Average (TAv) in baseball. He's just behind Andrew McCutchen and just ahead of Joey Votto. He's also ahead of (cherry picking coming)Shin-Soo Choo, Paul Goldschmidt, Robinson Cano, Adrian Beltre, Evan Longoria, and everyone the Red Sox have ever traded to the Dodgers. He's been incredible.

Sure looks different than last season.Jon Lester finds himself then loses himself then finds himself again, but at least he's found himself at all. It sure beats sending a flaming carcass to the mound over and over again. Felix Doubront has fallen off of late but for a good long while he was Boston's best starter, which is saying something. John Lackey has gone from persona non grata to someone that, well I can't speak for you, but someone who I enjoy watching. And weirdly, other than Clay Buchholz, Lackey has been the Red Sox best starter this season. Speaking of...

He was Cy Young and then not there, but now it seems he'll be back soon, just in time for a playoff run. And hey, what do you know, he should have some time to knock the rust off as well, and all without hurting the Red Sox chances because did I mention they have a SEVEN GAME LEAD.

Iglesias couldn't hit. I mean, just couldn't hit. Then he hit. It wasn't a convincing kind of hitting if you watched it but it sure worked and it looked great on paper. So good in fact that the Red Sox were able to deal him for Jake Peavy. Jake Peavy! Igleasias is an utter joy to watch in the field so I'm not downplaying his skills (well, a little) but Jake Peavy!

This has been an amazing year for the Red Sox down on the farm as well. Prospects are producing and getting promoted left and right. Guys who were in the low minors are developing and moving up levels and still being productive despite the more advanced competition. Coming into this season most prospect guys weren't high on Boston's system. Now? Xander Bogaerts may be the top prospect in baseball. Jackie Bradley and Henry Owens are going to be top 25 prospects in all of baseball. Garin Cecchini has a .420 on-base percentage in Double-A, Mookie Betts is just generally going nuts, Anthony Ranaudo was thought to be a blown pick but is now pitching well and knocking on the door in Triple-A. Brandon Workman and Drake Britton have been promoted to the majors and have both contributed (to varying degrees, I grant you). And add to that list the three guys the Red Sox picked in their most recent draft in Jon Denny, Teddy Stankiewicz, and Trey Ball. Ball was nabbed seventh overall, a spot where Boston never gets to pick, and yet there he is.

After 2012 it would be hard to say you had complete faith in the front office's ability to assemble a winning baseball team. But in less than a year, it's hard to find anyone who doubts them. The Nick Punto Trade will go down as one of the greatest trades ever made by the Red Sox, but that's only party due to the trade itself. It's also due to the way Boston's front office made use of its new-found financial freedom. The off-season was a master course in smart roster construction, minimization of risk, the importance of team chemistry, and building for the future. It makes me feel good about the future of the organization that the people who pulled of that deal and assembled this team are in charge going forward. 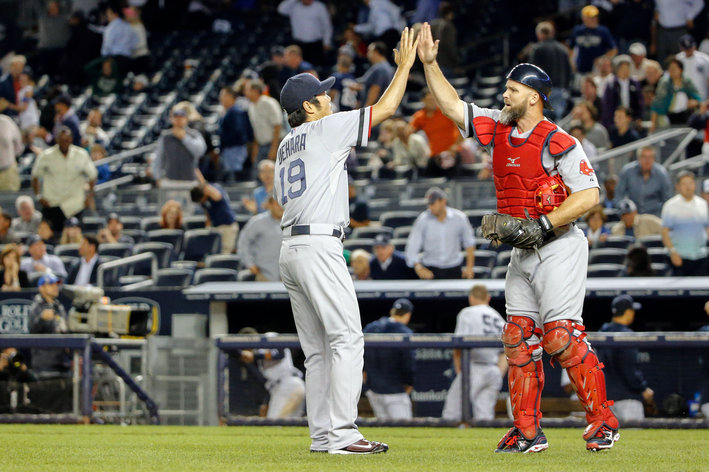 Last year Bogaerts started the season in Salem. That's High-A. Now he's doing things like crushing the you-know-what out of the ball against the Yankees in Yankee Stadium. He's 20 years old (as old as Mookie Betts!) and he looks amazing. We can't be sure how the future will play out, but Bogaerts looks like he'll be a star in Boston for a long time. It's not often the Red Sox have had a prospect of this caliber, and to have him find success so quickly, well, it's just the cherry on top of what has been an amazing year for the Boston Red Sox.

Yes, Jacoby Ellsbury got hurt, but even Jacoby, the king of missing entire seasons with horribly random injuries, appears to have managed to avoid a long-term injury this time and should be back before the playoffs.

In the end it's a pretty lengthy list, and I'm sure I left a few things off, too. (Daniel Nava? Koji? #HighFive!)

We all have our tough days, and the last two seasons were that for the Red Sox, seasons when it seemed everything that could go wrong did. And not just wrong, horrifically wrong at the worst possible time. So after going through that, it's nice to get some of the other side, the year when everything just seems to go right.