Why Quintin Berry is important to the Red Sox

A seemingly small acquisition could pay huge dividends for the Red Sox in 2013.

Share All sharing options for: Why Quintin Berry is important to the Red Sox

In September, that singular skill is enough. It's not like the rest of the season, in which each spot on the 25-man roster needs to be justified, as there's only so much room to go around, meaning players who do a couple of things well will beat out the one-dimensional options. In September, though, there are 40 available spots -- it's very difficult to find room or justification to even use up all of that expansion on one big-league roster. The Red Sox, even with Berry around just for his legs, are only using 30 of their 40 available players on the 40-man at present, and while that number will climb, it won't be to the point where Berry becomes a hindrance.

In fact, Berry was acquired right before September for a very specific purpose: he'll serve as a pinch-runner when the situation calls for it during the games in the season's last month, and, given the need for fewer pitchers on the active roster in the postseason, should the Red Sox make it to October, he'll do the same there.

He already has made his presence felt in this very way, as he was a pinch-runner in the ninth inning of Thursday's contest against the Yankees in New York. With Mariano Rivera on the mound attempting to hold down the Bombers' one-run lead, Berry took off for second on the first pitch:

Austin Romine's throw was on target but low, and Jeter didn't do a very good job of corralling it, which resulted in the ball flying out to left-center. Berry picked himself up from his slide and dug in for third fast enough that he didn't draw a throw from center fielder Brett Gardner, who instead conceded the extra base to Berry, rather than risk another mishap that would lead to a run. 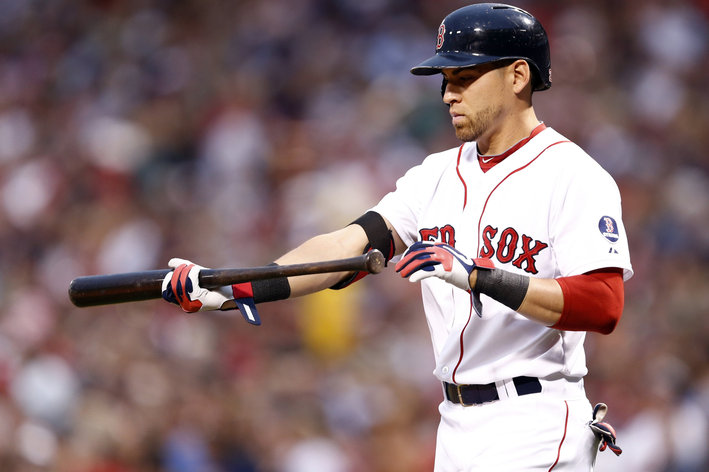 There is no one else on the roster who can do what Berry did last night, if only because Jacoby Ellsbury and Shane Victorino are already in the starting lineup, and can't be deployed at any old time that suits the Sox' situational needs. Catcher David Ross isn't about to come off of the bench and nab second, never mind take another base on an overthrow following a slide, and, as good of a baserunner as Jonny Gomes is, it's not because he's a burner on the basepaths. Mike Napoli, the baserunner whom Berry replaced, certainly wasn't going to huff it around the bases like that even if he didn't have plantar fasciitis and a degenerative hip condition.

Berry is a unique tool to be utilized in specific situations like the one the Sox saw before them on Thursday. Unless the Red Sox carry a lead into the ninth for every game for the rest of the year, there will be more moments like this one for Berry to make his mark. They won't all end with Berry advancing two bases on his own then crossing the plate once someone drives him in, but one of them already has, and there will be other moments for him to prove he's an important part of the roster, at an important time of year, despite what the roster machinations of the rest of the calendar year might suggest.