The myth of the 'must-win' game

We're all a little on edge, but we should probably relax. At least a little bit.

Share All sharing options for: The myth of the 'must-win' game

The #RedSox miss Chris Sale. The White Sox are turrible. The Tigers roll in next. Two out of three is an absolute must.

I love the passion, but the idea of a must-win game before anything close to resembling an elimination game seems to me like a sportswriter's invention or a figment of the fans' imagination. It gets back to the old saw that the games count as much in April as they do in September. The 2011 collapse and 2012 disaster have hung over this team since spring training, and it strikes me that concern in late August over a series with the White Sox is an expression of that. There is, quite simply, no reason to be scared.

Here's some math to help you past 2011, if you're stuck on it. According to a calculation by Andrew Sharp, the odds of the Red Sox/Rays playoff chase repeating itself are miniscule, given that they were at 278 million to 1 to happen in the first place, and none of that takes into account the fact that the Braves frittered away their playoff spot the same way that year with a 9-18 September, handing the wild-card to the eventual World Series champion St. Louis Cardinals. It's a logical fallacy to say it's not "due" to happen again this -- year-278 million to 1 odds will strike whenever they please, thank you very much -- but come on.

It's not going to happen this year because the Red Sox are a better, deeper team than they were in 2011, as fresh as that is in our minds. Everyone's on edge in September. The idea of a "must-win" before the tail end of September is silly, a way of imposing a totally subjective standard on the team we all like just to see if they conform to our short-term expectations. It's all very ESPN-ish: Analyst X calls a game a "must-win" game, that gets reported, the team loses, a player gets interviewed about a statement he didn't make that isn't even true. This is the sports media sausage factory. 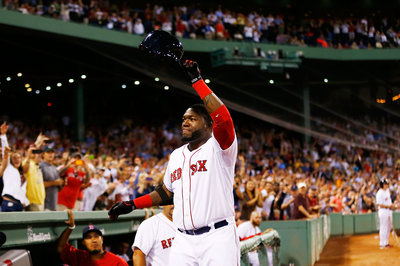 The longtime Red Sox slugger had himself a night, and surpassed 2,000 career hits because of it.

Some of this talk just comes with the territory. If your team is battling for the playoffs, you're going to use hyperboles, and I get it. Technically, there is no "must-win" game in baseball before a technical must-win game, and Red Sox fans have to understand that better than anyone on the planet, except maybe Yankees fans. I just want to make sure we understand it. Calling something a "must-win" game long before seems like a measure of impotence on our part, an offshoot of our inability to control what's happening with something that's a fundamental part of our lives, by our choice. If we impose an arbitrary standard on the team, and they fail to meet it, then we have material; if they do meet it, it's business as usual, and we're free to deploy it again, at our earliest convenience.

Mathematically speaking, the Red Sox will probably not win the World Series, even if they have as good a chance as anyone. We can obsess over first-round playoff matchups, but even a small slide into the Wild Card game isn't death, even if the root causes of any slide might continue to tear the team apart in October. The only thing we know is that it's not 2011 or 2012 again. We've known that for a while now. There's no reason flipping the calendar to September ought to change that. The Red Sox are free of must-win games for the near future, and sit atop of the American League. They have the exact same record they did on September 5, 2011. That year, they won six more games the rest of the season and missed out on a wild card berth that they would earn this year under new rules, forcing a one-game playoff. Yep: The Sox could be just as bad as they were in 2011 for the rest of the season, that 278 million to 1 anomaly, and they'd still make the playoffs. It is then, and not August, that the must-win games start.