Jon Lester's velocity is back, and so is he

Like a phoenix, Jon Lester is rising from the ashes of a dreadful 2012 season, throwing fire and smiting Tigers hitters.

Share All sharing options for: Jon Lester's velocity is back, and so is he

On Tuesday, facing a Tigers lineup that had scored more runs than any other team in baseball and had beat up lefties more than all but one other team, Jon Lester threw what was possibly his best game of the season. He went seven innings allowing just one run on eight hits and no walks while striking out nine Tigers. Lester out-dueled top Cy Young candidate Max Scherzer on a night when the Tiger's ace had his best stuff. It was fantastic baseball, and, for fans of Jon Lester, it was a sight for sore eyes.

The 2013 season has been up-and-down for the Red Sox lefty. His overall stats are solidly above average, though uninspiring from a guy who once looked like an ace. After his gem against Detroit, his ERA is 3.88, 7% better than league average (by ERA-) and his FIP is even better at 3.70. Lester has been somewhat better than that even, however. As Marc Normandin noted a few weeks ago, a stretch of bad starts in June have been a drag on his numbers this year. Now, as that hiccup fades further into the past, Lester is looking more and more like a top-of-the-rotation guy again, even if this version is very different from the one that graced the mound from 2009-2011.

Since the All-Star break, Lester's 2.41 ERA is the seventh best of any American League starter with at least 30 innings in the second half, and he has combined that with the third best FIP in the league over 59 1/3 innings. That puts Lester in a tie with Felix Hernandez for the best fWAR in the league since the break. Lester is not the strikeout machine he was in his previous peak. Since July, he has struck out 21 percent of batters facing him, a far cry from his 27 percent rate back in 2009. Instead, he has been pitching with greater control, walking six percent of hitters instead of approaching a 10 percent walk rate as he did back in 2009-2010. The improved control has been making up for the lack of strikeouts these last few weeks, giving him a K/BB ratio of 3.4 since the break. That would be the second-highest rate of his career if it held out over a full season.

The obvious question is whether or not this success is sustainable. Lester hasn't gotten unusually low batting averages on balls in play over the last few weeks, with a BABIP of .292. His strand rate is up from his career rate but it is not outlandish by any means. The only abnormal aspect of Lester's second half success is a startlingly low ground ball rate. Lester has gotten grounders just 37 percent of the time since the break, a huge departure for a man who has typically induced them 47 percent of the time. While it is difficult to imagine Lester sustaining a four percent HR/FB rate, the massive jump in fly balls obscures that number some, making it look even more extreme. His HR/9 rate of 0.5 would be a full-season best, and probably will see some regression, but most of what Lester has been doing appears to be fairly sustainable.

The biggest factor in Lester's recent success has been his rising velocity. The dramatic change is well illustrated in this image from Brooks Baseball. 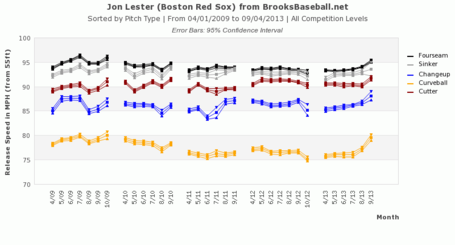 Nothing makes Lester's second half numbers look more sustainable than that glorious upswing at the end of the chart (though it is exaggerated by his single, dominant September start, to be fair). The ability to sit at 94-95 instead of 92-93 is huge, and that increasing seems possible for Lester for the first time since 2010.

Another huge difference is the return of his cutter. The bump in velocity on this pitch has been very small, but the difference in movement is huge. Here is the pitch from the second half of 2012 care of Texas Leaguers:

And here it is from the break through his last start this year:

The pitch has an average of almost ½ an inch less "rise" and almost ¾ of an inch more movement away from lefties. Both changes give the pitch more separation from his four-seam fastball, change-up and sinker, all of which are somewhat similar when grouped by movement. I had written last July that Lester's cutter had started to lose its cut, and speculated that Lester would either begin to abandon the pitch or find a way to get the movement back. Thankfully, it appears that the latte has happened. The pitch is still not quite as cutting as the 2009-2010 version, but it actually has been more effective during this recent stretch. Lester is throwing the pitch for strikes an unbelievable 78 percent of the time, thanks in large part to hitters swinging at it 70 percent of the time. He is getting 14% whiffs with it as well. All in all, it is back to being a key weapon in his arsenal.

Though his velocity is rising and his cutter is cutting once again, Jon Lester is a different pitcher than the guy who finished fourth in the 2010 Cy Young voting. That may not be a bad thing, however. He is striking out fewer hitters, but he is working in the zone more and still missing bats. I can't find a compelling explanation for the drastic increase in fly balls during his post-break resurgence, but that is the only thing about his recent performance that appears fluky.

Jon Lester is once again flashing ace potential. Whether he can take his rediscovered velocity and cutter and match them with his new low walk rates to fulfill that potential is still anyone's guess, but doing it one September night against the best offense in baseball is as good a place as any to start.