The struggling reliever gets his change of scenery with the move to Chicago.

Reliever Daniel Bard was designated for assignment by the Red Sox this past Sunday, and now he'll be reunited with former bosses Theo Epstein and Jed Hoyer in Chicago. According to the Daily Herald's Bruce Miles, Bard was claimed off of waivers by the Cubs. News of the Cubs' interest was first reported by MLB Daily Dish's Chris Cotillo. 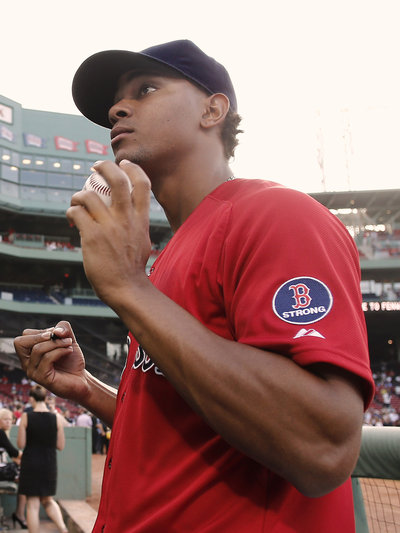 USA Today has named Xander Bogaerts their Minor League Player of the Year.

Bard had success as a reliever from 2009 through 2011, posting a 2.88 ERA over 197 innings. Things began to unravel for him late in 2011, though, and the struggles carried over and were exacerbated by his conversion back to a starting role. He began the 2013 season in the minors in an attempt to work through those issues, and threw just 16-1/3 innings with 29 walks against 10 strikeouts -- Bard had more wild pitches (11) than he did punch outs, and the ugly ERA that goes with that. His velocity is down, even back in relief, and there are plenty of questions about whether his problems are mechanical or if he's just in his own head to the point that he's no longer effective.

If the Cubs keep Bard on the 40-man roster, he will likely cost them at least $1.5 million, as his $1.862 million salary from 2013 can only be reduced by 20 percent at most, per the collective bargaining agreement. It's not necessarily an expensive reclamation project for someone with the Cubs' wallet, but it's certainly not a free ticket, either, even more so when you consider he will take up a place on the 40-man roster.

In addition to executives Hoyer and Epstein, Bard is reunited with Jason McLeod, who drafted him back in 2006 with the 28th overall pick. This group was the obvious choice to take a chance on Bard, given their familiarity with him combined with a change of scenery from Boston, where things unraveled. Still, though, Bard has a long road ahead of him to get back to even a fraction of what he used to be on the mound.

We wish him well, of course -- the whole Bard saga has been deflating for fans, too, as a former favorite devolved into someone whom the Red Sox couldn't even afford to hold on to any longer.