Bobbleheads and tulips have more in common than you might realize.

On Sunday, the Red Sox will wrap up their season series against the Orioles in Baltimore on Chris Davis bobblehead night. Twenty five thousand fans fifteen and under are eligible for the prizes, which, bully for the fans, will likely be at Camden Yards by game time. Tuesday night in the Bronx, the Yankees couldn't say the same at their own giveaway.

The Bronx Bombers were running a smaller promotion -- a giveaway of Mariano Rivera bobblehead dolls to the first 18,000 fans regardless of age- - but Mariano's extraordinary gravitas, and some logistical issues, combined to cause a massive backup outside the gates as the team first waited for the dolls to arrive, and when that failed, for their printers to spit out vouchers for the them to be printed later. When they were finally let in, and the dolls arrived in the third inning, there was a line four-wide and eight staircases deep to retrieve one. It was a mess the size of the Yankees' season. It was so bad that the team offered up 2014 tickets to some of those caught in the fiasco's webbing.

For whatever reason, the Red Sox did not hand out any bobblehead dolls this year. This is a good thing. Bobblehead dolls create "tulip mania" -- so named for the absurd price inflation of tulips in the Netherlands in the 17th Century, a phenomenon explored in a book called Extraordinary Popular Delusions and the Madness of Crowds. Before the tulip bubble exploded, the book's author, Charles Mackay, wrote that one prospector traded 12 acres of land for a single tulip.

Those Mariano dolls? They might as well have tulips for heads. There's nothing wrong with bobblehead dolls per se, just as there's nothing wrong with tulips, but the madness they inspire belies the fact that the most of the dolls that aren't immediately sold on eBay won't retain their emotional value for any appreciable amount of time, and certainly aren't worth sacrificing several innings of a baseball game for.

Not to get too literary, but an extraordinary essay called "Losing the War," by Lee Sandlin, explores how objects lose their emotional value over time, no matter how important we thought they were in the first place. It opens with Sandlin staring at a porcelain tiger on his desk that formerly belonged to his dad, a fighter pilot for the Flying Tigers during the Korean War. It meant plenty to his father, but the meaning was largely lost to time and incomplete information, which Sandlin called "the common fate of mementos. They're never quite specific enough. No matter what their occasion was, they sooner or later slip free and are lost in a generic blur: a Day at the Carnival, a Triumph at the State Finals, a Summer Vacation, My First Love." Let me add: a Day the Stadium.

Will Middlebrooks' two-homer night shows off his successful new approach 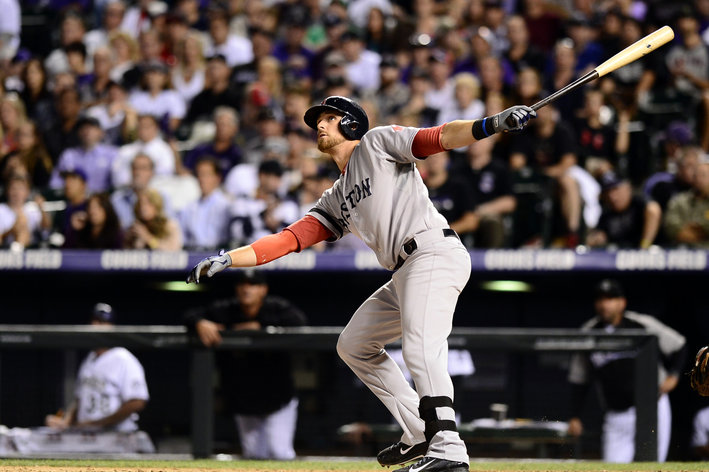 These weren't just mistake homers like in the past: Middlebrooks' altered approach was on display against the Rockies, and they suffered for it.

There are exceptions, of course, objects might retain their emotional value longer than normal: A great-grandmother's engagement ring. The watch from Pulp Fiction that Christopher Walken kept -- to paraphrase Walken, up his own ass -- to hide from the Vietnamese. Maybe, even for some kid at Yankee Stadium, a Mariano Rivera bobblehead doll. That's the idea, isn't it? That a mother or father will create a connection with a child, a lasting memory that exists both in the kid's memory and in front of her or his very own face. The reality is that it'll largely end up no more significant than Sandlin's tiger.

With eight ramps' worth of people waiting to exchange vouchers for their Rivera dolls during the game, getting one came down to sacrificing one's time at the game. Consider what we know, now, about the value of a sacrifice in a baseball context -- that, mathematically, there are just damn near zero instances where it's a better idea to give up an out than swing away. The reason we love baseball is that anything can happen at any moment, but if you're stuck on a ramp in the Bronx, you'll miss it, and all you'll have to show for it is a 2-dollar mold of plastic and a perfectly good baseball game, all of which will likely be folded into a generic memory. You're waiting for a doll with no more real emotional or monetary value than a tulip, and one whose value will wilt just the same. You're not necessarily missing anything by waiting, but you're not creating anything either, except, in a small way, the instrument needed to pop the bobblehead bubble forever. Let's hope so. Otherwise, all that wasted time at a baseball game was likely for nothing.