In which a logical inconsistency is unveiled, and pounced upon.

Share All sharing options for: Clay Buchholz vs. Rob Gronkowski: A character study

The Red Sox have won the American League East for the first time since 2007, and a major portion of their success can be traced to the excellence of their pitching staff. It's been a long while since Boston was able to send one reliable starter up to the mound, let alone four (or five, given the bulk of Felix Doubront's season). Arguably the most impressive starting season has been turned in by Clay Buchholz who, despite missing much of the middle of the season, is still leading the team in pitching WAR and rocking a 1.60 ERA to go with his 11-1 record. He's looked pretty good in his return from that long break, which bodes well for the team as it heads into the playoffs. Clearly the time off was worthwhile, given the team's short-term goals (the 2013 pennant) and long-term goals (Buchholz anchoring the staff through 2017).

Back in July, Boston.com's Adam Kaufman didn't think Clay's time off was helpful, and even called into question Buch's mental makeup, commitment to the team, and overall Will To Win (©Hawk Harrelson, 1875). Our own Bryan Joiner dealt with this column in detail, and it's not really worth re-thrashing here today.

More: The worst Red Sox column of the year is why we can't have nice things.

At least it wasn't until last Wednesday, when Kaufman decided to once again put on his team-runner hat (a deerstalker cap with a red B on it, on sale at the SB Nation store next week), this time about one of Boston's other franchises.

In the column, Kaufman implores the New England Patriots to delay the return of world-class tight end Rob Gronkowski until he's back at 100% health. Any comeback before he's ready, after all, could cause further injury, thus putting Gronk on the bench for the remainder of the year, a far heavier blow to the Pats than a few missing weeks early on in the season. So we get this quote, in direct contrast to the entire Buchholz column:

They can get by without him now; they'll need him later, when injuries have forced them to miss him most the last two seasons. One or two more weeks, whatever it takes, of rehabbing his body and getting it into game-shape is far more important if his physical strength indeed remains even the smallest issue.

Let's do the fair thing, and give Kaufman the biggest possible benefit of the doubt here. The situations of the two teams are relatively different. When Buchholz was delayed in his return, Boston was only 2.5 games up in the East, Tampa Bay was surging, and Jon Lester was starting to regress from his early-season success. Baltimore and New York were right behind Tampa, and Toronto had the talent to at least theoretically make a run. The Pats play in the AFC East, with the Jets, Bills, and Dolphins. This would be like the Sox playing with four Astros teams, except that the Astros are actually trying to be unwatchably terrible. So there's that. There's also the realities of football being a violent, physical sport, with catastrophic injury waiting in every play. Starting pitching is admittedly something the human body wasn't designed to do, but thinking of the injury probability as lower isn't silly on face. Finally, of course, one tight end, even one as talented as Gronk, isn't as critical to a team's chances as an ace starting pitcher. One can get by with a hole in the receiving and blocking corps, a hole in the rotation is much harder to patch. Three points to Adam.

So why call him out on this? Maybe he was simply more worried about the Sox than the Pats. Maybe he trusts Belichick's ability to mix and match players, or Brady's ability to turn leaden receivers into gold, more than the Red Sox' rotation depth. These things aren't unreasonable, why is his turnaround on bringing back injured players an issue? Isn't it good that he's now concerned about preserving a player's health in the long-term interest of both the player and his team? The answer lies in the headlines. "Clay Buchholz's frame of mind is concerning" and "Patriots can't be tempted to press Rob Gronkowski into action."

Read the pieces, and a fascinating dynamic appears. In the Gronk piece, whole paragraphs are devoted to cataloging the tight end's numerous past injuries. Arm surgeries, muscle strains. A sentence lamenting the fact that back injuries affect every part of one's rehab routine. In the Buchholz piece? Not a single mention of any past injury. The shoulder issues. The esophagitis. The fractured goddamn back. None of it is relevant. 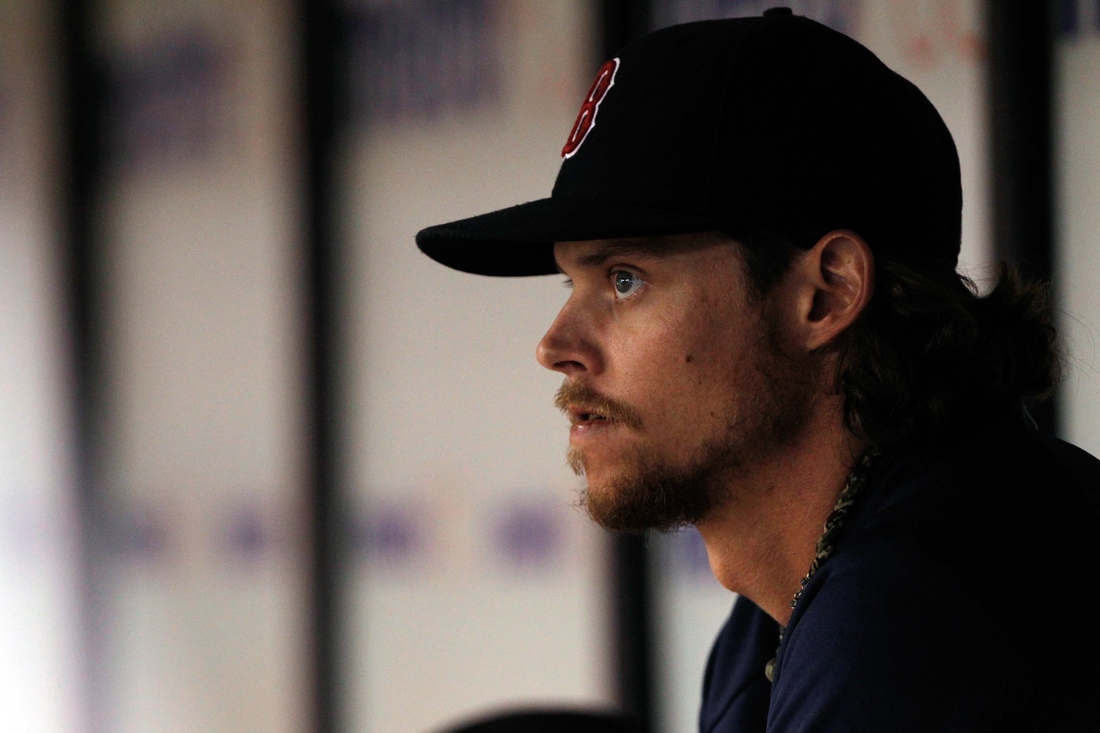 What is relevant, though, is Kaufman's interpretation of Buchholz's quotes and mindset. Something which, strangely enough, doesn't come up in the Gronkowski piece. Buchholz sitting out longer is clearly his decision, and a reflection on his (clearly lacking) character. Gronkowski sitting is entirely up to the team, and says nothing about him as a person. It's the rare comparison that manages to be insulting to both parties at once. I've made as many "Gronk only pawn in game of football" jokes on Twitter as anyone, but I'm betting the guy has an opinion on whether or not he's healthy enough to play. You'd never know it, though, from Kaufman's column. No quotes, no "Gronk doesn't want to win," nothing. Just the assumption that it's a team decision.

This is why the armchair psychology in sportswriting is so frustrating: it's based on simplistic assumptions. Clay Buchholz is a spindly pitcher with a scraggly beard and sad eyes. Rob Gronkowski is basically Piotr Rasputin in a football helmet. Hell, we can even make it simpler: Buch plays baseball, Gronk plays football, and we all know which sport is played by the manliest of manly men. Thus, Buch's a wimp, and Gronk's only sitting because his team has commanded it. What else could it possibly be? There's no other possible interpretation, certainly not one that could be uncovered with a couple of phone calls to the guys in question. Why work when you can go with your gut for a few easy clicks?

This sort of sportswriting isn't just lazy, it's damaging. It reinforces the bizarre obsession we have with the mindset and character of baseball players, and the total dehumanization of football players. That a guy playing football might be worried that he'll get hurt again never even comes to mind. This is mind-boggling, especially given both the ease with which football contracts can turn into mist and the well-documented damage football does to its players. "Is his arm healed? Put a helmet back on him!" Every bit of concern in the piece is about the team, rather than the man.

The same is true in the Buchholz piece, but it's turned on its head. Everything is about fear and mental weakness. Why we obsess about motives and character in baseball so much I'll never truly understand. Maybe it's that the players seem normal-looking, or that we see their faces so clearly, or that so often the sport comes down to a one-on-one confrontation. But it's always there, and it leads to ridiculous conclusions, like the worship of David Eckstein or the ongoing condemnation of anyone who ever sniffed something resembling a steroid (except for St. Pettitte, who apologized).

Ryan Dempster headed to the bullpen 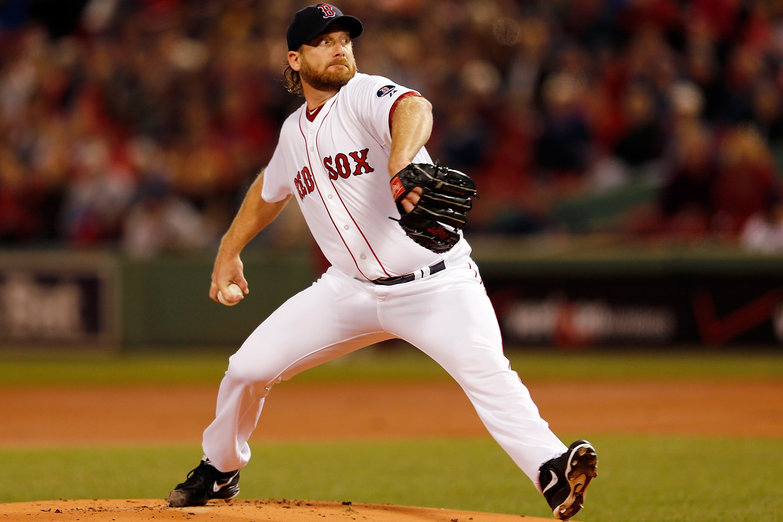 The return of Clay Buchholz meant someone would have to go. Dempster it is.

Strangely, the success of this year's Red Sox, and the clear role of clubhouse chemistry in reinforcing that success, makes this amateur mind-reading even more aggravating. Clearly, personality comes into play in baseball. Scouts are always asked about a prospect's "makeup," because playing at the top level of baseball is incredibly hard. There's not just one way to approach it, clearly. One can grind like Pedroia, study like Varitek, or just see-and-hit (miss your swing, Manny). But mindset matters, and can have an incredible effect on a team. So why did so many new baseball writers seek to downplay it over the last decade?

Because of lazy grit-and-hustle horsecrap like that initial Kaufman piece. And every column you'll see over the next week that chalks up Boston's success to the mere presence of Jonny Gomes, as though he's a Token of Winning +3 rather than a motivator and a damn fine hitter. Personality matters, and it's a good call to look into it. Strangely enough, when writing up a piece condeming Buchholz as being uncommitted to the team's success, Kaufman left out one important fact: the team that drafted and developed Buchholz, that must know him better than anyone at this point, wants him here for the next four years.