Jarrod Saltalamacchia: The overlooked star of the 2013 Red Sox

There are plenty of success stories on the 2013 Red Sox. Jarrod Saltalamacchia's is both one of the best, and the most overlooked.

Share All sharing options for: Jarrod Saltalamacchia: The overlooked star of the 2013 Red Sox

The Boston Red Sox are (still) one game away from clinching a playoff spot. It has taken a lot of things going right to bring the Red Sox to the verge of October baseball after the nightmare of last season. One of the most under-the-radar factors in this turnaround is Jarrod Saltalamacchia’s transformation from a capable everyday player into something more.

One reason Salty has been somewhat overlooked is that his strong season would be easy to miss when going by the more traditional statistics. He has hit .263 with 13 home runs and 59 runs batted in. Those numbers might be perceived as solid enough for a catcher, but they aren’t an accurate reflection of just how good Saltalamacchia has been at the plate this season. He hasn’t just been good for a catcher, but firmly above average for a player at almost any position.

Salty’s full batting line is .263/.333/.450 which translates to a wRC+ of 110. That is better than the American League average for any position except first base and it is 16 percent better than average for American league catchers. After hitting basically average for his position since joining the Red Sox, Salty has finally taken a major step forward at the plate.

As a hitter, Saltalamacchia can be frustrating to watch. He strikes out at an extreme rate, whiffing 30 percent of the time over his career. His 14 percent swinging strike rate is the 11th highest of any player to see 500 plate appearances over the last five years. With that type of obvious flaw in his game, it's too easy to just dismiss him offhand. While he has made some progress in missing the ball less this season, his strike out rate remains right at his career average. The key is how he's making those strikeouts; instead of trying to swing and miss less (something he may never be able to do), Salty is simply swinging less and this change has produced dramatic results.

Salty is posting career highs in walk rate and batting average on balls in play this season and that accounts for almost all of the added production at the plate. Since joining the Red Sox, Salty has been walking more and more, posting a 9 percent rate last season and topping that with a 10 percent walk rate this year. Unfortunately, greater patience alone wasn’t enough to get him to league average production at the plate. Salty was still hitting a large percentage of fly balls and while some found the seats, most landed harmlessly in opposing outfielders' gloves. Batting ball percentages between fly balls and line drives are not the most reliable data points, but coupled with the his career best .361 batting average on balls in play and a few more ground balls, the 5 percent jump in Salty’s line drive rate is likely reflective of some level of greater selectivity.

Even with his high swinging strike rates, Salty has not been a true hacker at the plate. He has swung at pitches out of the zone 32 percent of the time and swung at 48 percent of pitches overall, both above average rates, but not extreme ones. This season he is swinging less overall and less on pitches out of the zone, but the biggest change is actually in pitches in the zone. Salty is swinging at just 63 percent of in-the-zone pitches this season, a 4 percent drop from his career rate.

Swinging at strikes less isn’t typically the way most people think you would become a better hitter, but for Salty it has been extremely effective. Of course, he isn’t just taking strikes randomly. The drop in his swing rate in the zone is part of plan. Below, are zone maps from Brooks Baseball for Salty’s swing rate on off-speed and breaking pitches when he has no strikes against him prior to this year and for this season. (Because Salty is a switch hitter I have used just at bats against RHP) 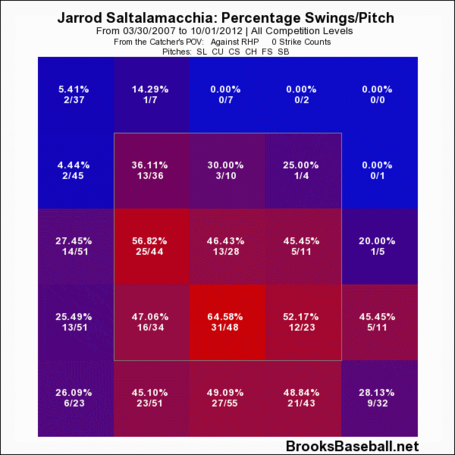 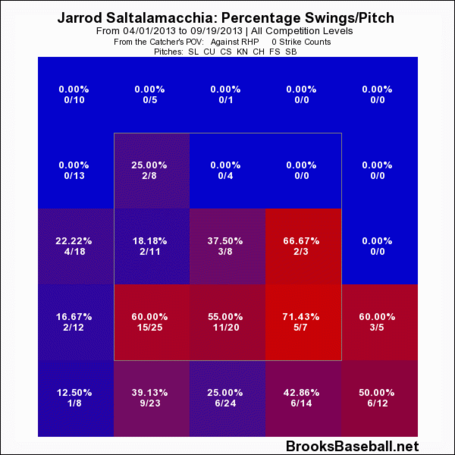 This season, Salty is only chasing breaking balls and off-speed stuff early in the count or ahead in the count if they are right in his wheelhouse (which is low and in as a LHH). Looking for fastballs has resulted in Salty hitting more pitches that he can actually drive and hitting fewer easy fly ball outs. This isn’t the only adjustment he has made, but it is a fairly dramatic change and it should be something he can stick with. For a player with a long swing like his, looking for his pitch is a better strategy than trying to hit a pitch simply because it's a strike.

The Red Sox are patient, but is that why they're good? 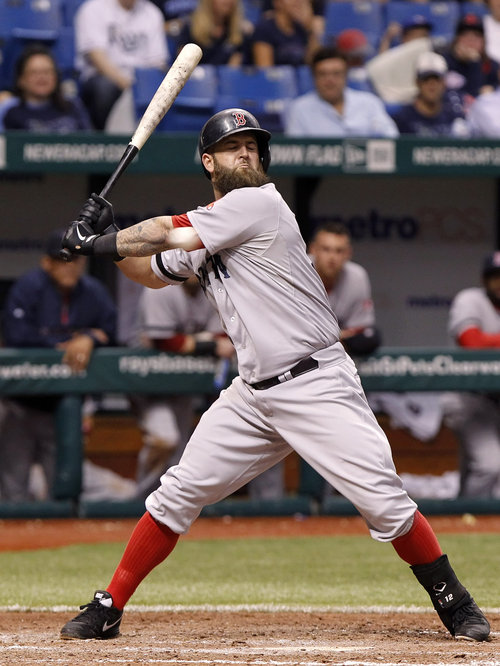 Salty's patience is part of a team-wide trend

The strange thing about this change is the impact it has had on his power. His home run power is down after a very strong power season last year, but his doubles are way up. Last season Salty hit 25 home runs, one triple and just 17 doubles. This season he has just 13 home runs, but he has 36 doubles in three fewer plate appearances than he received last year. Those doubles don’t provide the same value that a better home run total might, but the added value in batting average does. Given that Salty posted a 20 percent HR/FB rate last season and has never topped even 15% in any other year, we probably should not expect a return to those types of home run number regardless of approach. If his doubles, line drive rate and BABIP are any indication, Salty is driving the ball more than ever and some added home run value may follow.

Though Salty will probably not sustain a .361 batting average on balls in play long term even if he sticks with this more selective approach, a step up from his career .319 is certainly possible going forward. With the extra walks he is also picking up, that is enough to keep him hovering around average at the plate even if he remains a strikeout machine. Given his position, that alone makes him a very valuable asset. This season he has been worth three fWAR despite a 0.9 deduction from his defense.

Those numbers don’t include pitch framing data, however, and that is almost certainly a plus skill for Salty. He was credited with saving 10 runs a game by Mike Fast’s original pitch framing study in 2011 and a Fangraph’s study from the first half of this season using a different methodology had him adding 5 strikes per 1000 pitches. If that skill were included in his numbers, Saltalamacchia could be over four wins in value this season, a range that typically makes a player star-caliber. Even among Red Sox fans few people think of Jarrod Saltalamacchia as a star, but this season, he has been just that. His transformation is a big reason the Red Sox are just three wins from their first division title since 2007.