Why one Red Sox fan is rooting for Cleveland tonight

The Red Sox just need Cleveland to lose to make it into the postseason. So why root for the Indians?

Share All sharing options for: Why one Red Sox fan is rooting for Cleveland tonight

The Cleveland Indians will welcome the Houston Astros into Progressive Field tonight, and so are very likely to win. Some Red Sox fans will consider this bad news. One loss from the Indians, after all, puts the Red Sox in the playoffs. One loss from the Indians drops our focus down to one magic number after a countdown that has, frankly, felt much longer than it actually has been. Some of that has to do with each figure dropping by all of one in the last three days, be it due to inactivity or unfortunate results, some of it to do with how long we've had our eyes on it. Whatever the case, it'd be nice to have it over and done with.

For my money, though, I'm hoping the Astros don't pull out an unlikely win in Cleveland. And here's why:

Back in 2009, the Red Sox were pushed forcibly into the postseason when the Los Angeles Angels defeated the Texas Rangers 5-0 on September 30th. The Red Sox had done just about everything they could to avoid it over the preceding week, getting swept by the Yankees and the Blue Jays, three games a piece, leaving them still looking for that last tick off the magic number. In the end, Boston's third straight postseason berth was celebrated hours after the Red Sox had hit the showers, with a shrugging of shoulders and perhaps some sighs of relief (which, had this season come after 2011, would have followed cries of abject terror by all involved), gifted to them by the team that would unceremoniously sweep Boston out of the postseason one week later.

For fans of any team in any sport, the value you get for your fandom can be measured in memories and stories as much as anything else. If that 2009 team had gone on to win the World Series, there's no way I'd remember this about them. The 2009 season would have been glorified as 2007 and 2004 before it, and we'd all just gloss over this ugly detail in the retelling.

Who should be on the playoff roster? 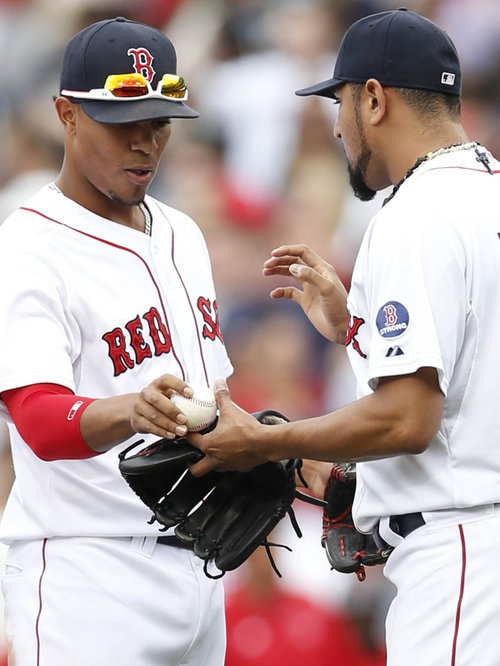 But since it didn't happen, that sticks out. Memories of 2009 are few and far between, leaving them one of the least distinctive Red Sox teams of the new millennium. Frankly, I think the first thing most of us would come up with is Papelbon blowing the save in that third game of the ALDS, and while that likely would still stand out more if the Red Sox managed to clinch the Wild Card in a more energizing fashion, at least the memory of a Fenway celebration, however muted, would serve as a counterbalance.

The Red Sox are coming off just two losses tonight rather than five. A third loss here would be a downer, but it wouldn't be quite so awful as the sixth must have felt four years ago. But more than anything I just want these 2013 Red Sox--a team already ten times more memorable than the 2009 club, all things considered--to make this moment their own, and not the Astros' by virtue of Cleveland's game ending ten minutes earlier. Even if their focus will still be on finishing off that division number, I want an exclamation point moment for this season. I want as many as I can get.

And it doesn't hurt that it would keep the pressure on the Rays in the wild card, either.