Who should be on the Red Sox playoff roster?

Boston hasn't clinched yet, but it seems to be a matter of time until they do -- who should play once they get to October?

Share All sharing options for: Who should be on the Red Sox playoff roster?

Let's assume, for a moment, that the Red Sox do indeed win the American League East crown. They are nine games up on the Rays with 10 games to play, so it's not much of a stretch to guess in this direction. If they do finish in first, it means their first playoff series will be a normal one, as it'll be the AL Division Series, rather than a one-game playoff between wild cards. What we want to figure out is what the Red Sox roster should look like for the ALDS.

September muddies the roster picture, as expanded rosters allow the entire 40-man roster to come to the majors. The Sox will have to pare back down to get to 25, but it won't be the standard, regular season 25: the playoffs are a different format, as they are not a long-haul scenario like the regular season, so that means a different set of 25 is necessary.

We'll take this section by section, beginning with the lineup.

There won't be any changes here relative to what we're used to seeing, assuming Jacoby Ellsbury returns before year's end and is good to go for the playoffs. Jarrod Saltalamacchia will be the primary catcher. Mike Napoli will continue to play first base regularly, especially now that his plantar fasciitis pain seems to have tapered off a bit. Dustin Pedroia and Stephen Drew will comprise the middle infield, while Will Middlebrooks has hit his way back into the starting third base role. Daniel Nava, Ellsbury, and Shane Victorino will be the primary outfielders, and David Ortiz will, of course, be the designated hitter.

There is little reason to mess with the success of this group. Middlebrooks has slowed down a bit of late, but he was never going to be among the league leaders in OPS forever -- if he can hit about .270/.315/.475, he's more than doing his job at third, especially given his glove there. He was the only real question mark among the regular as of a month ago, and he's answered that with a serious offensive surge and what looks to be legitimate improvement at the plate.

Read More: The new Will Middlebrooks

Should Ellsbury end up not being healthy, Jackie Bradley Jr. would take his spot on the roster. There isn't much need for Bradley otherwise, though, which isn't a knock on him so much as it is how roster construction works in October.

The Red Sox bench is a little different than some, if only because they have a few semi-regulars on it. Jonny Gomes has appeared in 109 games, and has the most playing time in left field of anyone on the Red Sox, but when the entire outfield is healthy, he's mostly there to bash lefty starters and pinch-hit. Mike Carp has had a monster season, and has played in 78 games despite the presence of two other left fielders as well as a healthy first baseman and DH. Like Gomes, manager John Farrell finds spots for Carp, and he's a valuable piece off of the bench. David Ross will be the one catcher backing up Salty during the playoffs, as he should be.

Why Quintin Berry is important to the Red Sox 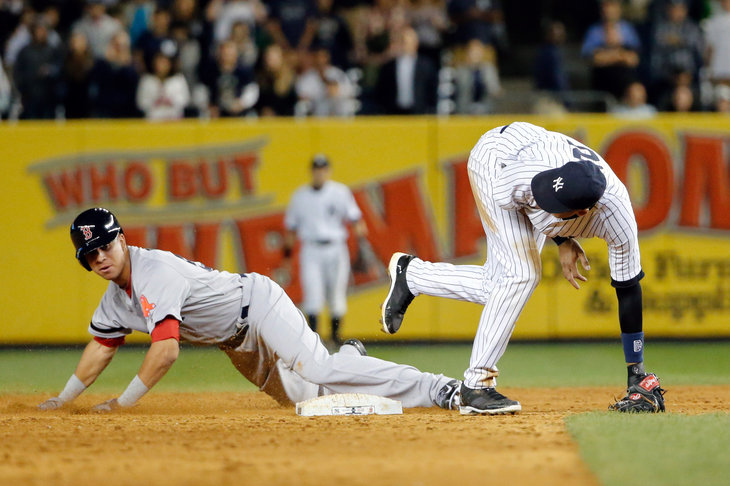 After that, you're looking at Xander Bogaerts as the backup third baseman and shortstop, as well as another bat off the bench should a need arise. Quintin Berry is one of those pieces made more for a playoff roster than a regular season one, as his speed makes him a late-game asset as a pinch-runner, and, in case of emergency, he could suit up for duty in the outfield late for defensive purposes. While he's not a great defender in spite of his speed, when the roster has the likes of Gomes and Carp on it, there's room for Berry's glove. There is not room for Brock Holt, however, given the presence of Bogaerts. In a pinch -- say the unthinkable happens and Dustin Pedroia is injured -- Middlebrooks could line up at second base temporarily.

Between the lineup and the bench, that's 14 of the 25 roster spots accounted for.

Rather than having to scramble to find four healthy, productive pitchers for the playoffs, the Red Sox are in a position to turn aside useful arms and go with four pitchers who many might be happy having lead the postseason rotation. You can thank the Jake Peavy trade and the return of Clay Buchholz for that.

Who goes first is of little consequence in many ways -- if Buchholz's command is back where it needs to be, he's the logical choice, but there is no real wrong answer, not with the seasons that John Lackey and Jon Lester are having. Peavy is the fourth starter in this group, but that's a pretty nifty thing, given that, in the pre-season, one would have assumed that role to be that of Ryan Dempster, who there might not even be room for on the October roster. More on that later, though. 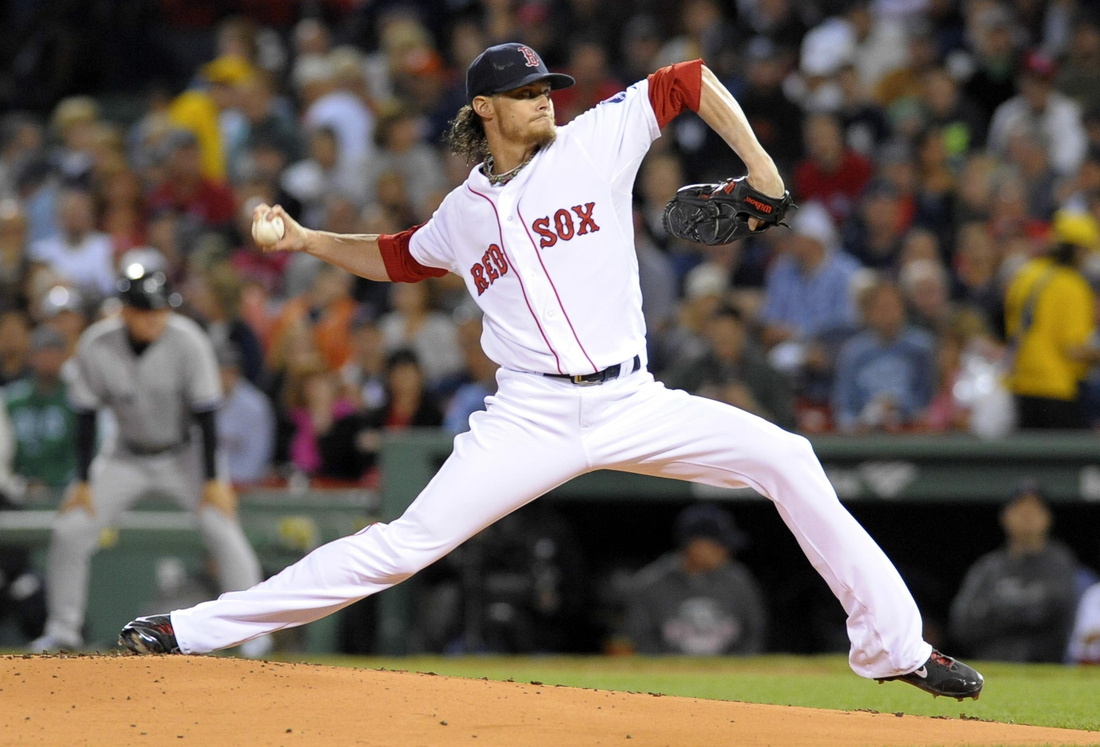 There are a few obvious choices here. Koji Uehara (19), Junichi Tazawa (20), and Craig Breslow (21) make the most sense as a potential 7-8-9 trio to close out games once the starters do their thing. With any luck, a few starters will go seven, allowing one of the group to catch a breather. What's a little more difficult to figure out is who will take the additional four spots in the pen.

Farrell obviously has a thing for Brandon Workman, and it's understandable, even if he's had some trouble with his command at times. While you maybe don't want him pitching in a one-run game, he's stretched out and capable of throwing a few innings, or taking over for a starter who doesn't have it, or as an alternative to one of the primary three arms in a game where the Sox have a cushion to work with. That's 22.

The Red Sox guide to beards 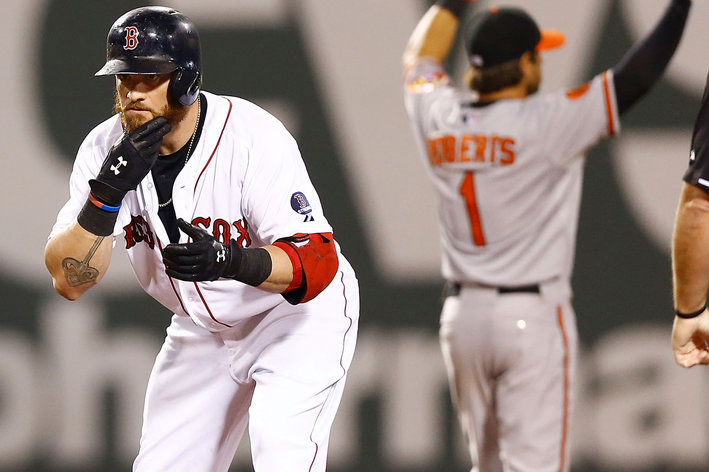 Beards are a significant part of the Sox season, and they've put them together in an infographic for your viewing pleasure.

Lefties besides Breslow will be necessary, especially since Breslow is far from being a lefty specialist thanks to his abilities against right-handers. For all of Franklin Morales' injuries and struggles in 2013, he's still been flat-out filthy against lefties, and has performed exceptionally against them in his career. Of all of the options, he makes the most sense, even if his overall line is lacking. That leaves the Red Sox with one of Matt Thornton or Drake Britton, and you have to think, given his season as a whole and his experience, that it will be Thornton getting the nod. That's 24.

There aren't any obvious, must-have relief options after that. Allen Webster, Rubby De La Rosa, Steven Wright, and Brayan Villarreal might all have futures, but are not required in the present. Because of this, it's down to either Dempster or Felix Doubront for the final spot. Doubront is left-handed, but the Red Sox don't necessarily need that given Breslow, Thornton, and Morales. They also don't necessarily need another stretched out option, given Workman's presence. Doubront has been, on the year, a better pitcher than Dempster, though, so he's not without his positives.

It might come down to which of the two performs best the rest of the way. Doubront has scuffled and had his last turn in the rotation skipped so that the Sox could work on his mechanics, while Dempster, whom it had been assumed would be the first bumped from the rotation, has been much improved since his extended vacation following the Alex Rodriguez beaning, posting a 3.86 ERA with over a strikeout per inning in that four-start stretch. The fact he's right-handed in a bullpen that could lean too far the other way might be a plus, too, as well as his experience in relief: Dempster was a successful closer for three years, and while those days are behind him, he's at least been there before.

As of today, I might tab Dempster over Doubront for that final spot. Again, though, we'll see how things pan out over the last couple of weeks of the season, in terms of performance and health.