Is Jose Dariel Abreu the right risk for the Red Sox?

Is Jose Dariel Abreu the right risk for the Red Sox?

Share All sharing options for: Is Jose Dariel Abreu the right risk for the Red Sox?

Earlier today we mulled over the possibility of re-signing Mike Napoli, who recently made it known he would be happy to stick around. The big question for Napoli was whether it would take a multi-year deal to keep him in Boston, or if his hip condition would basically convert any given qualifying offer into a team option.

In another year, that scenario--the effective team option--might make plenty of sense for the Red Sox. Napoli has been good for them, the team has really come together as a unit, and in a world of insane contracts for first basemen, this could be a healthy middle ground sort of deal.

What we didn't talk about, though, was the opportunity cost of an accepted qualifying offer. That cost comes in the form of Jose Dariel Abreu's impending free agency. Abreu has not seen an at bat in the major leagues. There are no guarantees he will be able to hit in America like he did with Cuba. But conceptually, at least, there's every reason to think he'd be a good target for the Red Sox.

You might think that sounds wrong, and at first blush it does seem an odd statement to make after an offseason where the Red Sox were doing their damnedest to avoid risky free agent deals. After all, Abreu is nothing if not a risk. He's got a very high ceiling, and an almost bottomless floor. There's a very real possibility that the Sox end up getting nothing for their dollar. That's just how it works when you sign an all-bat free agent from another league.

So why does Abreu work for Boston? How is this different from the cautionary tales of Adrian Gonzalez and Carl Crawford? The key is in the amount and nature of the risk.

After Alex Rodriguez, the game's three biggest contracts belong to first basemen. Albert Pujols, Joey Votto, and Prince Fielder. Three more come in by the time you've reached #17 in Miguel Cabrera (no, standing at third doesn't make him any less a first baseman by nature), Mark Teixeira, and Adrian Gonzalez. Perhaps it's because the production of a first baseman with 40 homers and a stone glove is so much more tangible than the shortstop with brilliant defense and simply good offense, but first basemen are ridiculously well-represented amongst baseball's most well-compensated players.

So if the Red Sox want to get into that game, they've got only a few options: produce one from their farm system, match the sort of contracts given out to Pujols and his lot, or take a risk on a guy like Abreu. 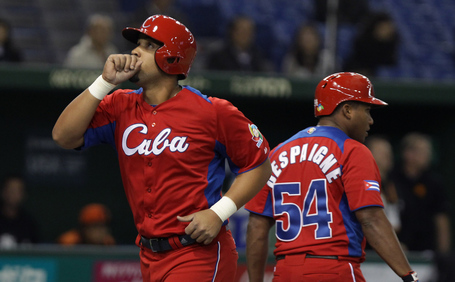 Unfortunately, there's no indication the Red Sox have a guy who can be anything like that in their farm system. The Red Sox have even shown a tendency to avoid drafting that sort of player highly, opting instead for players in more demanding defensive positions. And if we're talking about not taking huge risks that could sink a franchise, avoiding the likes of Pujols seems like a good place to start.

What Abreu offers, then, is a chance to get an elite bat at a price which, while expensive, is not prohibitive. The biggest difference between a deal for a top first baseman and a deal for Abreu is the possibility that Abreu will be worth next-to-nothing, so we should really ask ourselves how bad that would even be? Abeu's own agent floated a $60 million price tag for six years, but let's even bump that up to $75 million to be conservative.

That's $12.5 million per year. That's less money than the Red Sox are currently paying Ryan Dempster to be a pretty mediocre innings eater in the back of the rotation (importantly, for only one more year). Simply put, it's a hit the Red Sox are very much capable of absorbing. It's not something the Red Sox should be happy to have on their books for five or six years, and they shouldn't make a habit of piling contracts like that up in multiples, but given the current state of the payroll, it seems like the chance at bringing in a really big bat is worth risking the first weight on an otherwise largely unencumbered roster.

It doesn't hurt, either, that the Red Sox have some insurance against an Abreu bust. If he doesn't perform well, then the Red Sox can see just how real Mike Carp is as a starter. Or if Daniel Nava is capable of manning first base, at least until a more long-term solution can be found. There are just so many options for the Red Sox that they're not really running the risk of having a completely unproductive position on the field in 2014.

And if he works out? Well, just check out some of his homers.