Mike Napoli wants to stay in Boston, but should the Red Sox keep him?

Mike Napoli loves it in Boston, but is there a place for him in Fenway Park in 2014?

Share All sharing options for: Mike Napoli wants to stay in Boston, but should the Red Sox keep him?

Mike Napoli has made it known to Alex Speier that, if he had it his way, he would be in Boston come 2014:

"I love it here. It's just something special, and a lot of these guys are going to be back here next year. I'm pretty sure some of these guys who are free agents, they're probably going to try to lock up, too," said Napoli. "This is an ideal spot. I've never had anything like this. I had it really good in Texas. But this is unbelievable."

Boston's starting first baseman has had an up-and-down season, to be sure, but on the whole he's been pretty typical Mike Napoli. A 124 wRC+ is just slightly below his career average, and while he's not brought the value of playing behind the plate, he's actually been far better than expected manning first base. The middle of the year looked awfully dodgy, with Napoli striking out left and right, but he's one of the team's hottest hitters at the moment.

Long story short, if the dreams of Napoli reproducing his previously ridiculous numbers at Fenway haven't exactly come true, he's been a valuable member of a very good team. But does that mean the Red Sox should make it a priority to bring him back?

It's worth noting, first, off that Napoli made some mention to Speier that, with his hip looking just fine, there should be less reluctance from teams to commit to him. In other words, he seems to have his sights set on a multi-year deal.

If indeed this is the case, then that changes the question of the Red Sox re-signing Napoli even more than you might expect. This isn't just a question of how many years the Red Sox would have to offer him, but of whether or not a qualifying offer is a guarantee.

Think about it this way: if the Red Sox had made a qualifying offer to Mike Napoli while multi-year deals were not on the table, is there any chance he declines? His price tag immediately becomes his 2014 salary plus a first-round draft pick. Good luck finding an organization that's willing to pay $15 million and a draft pick for one season of Mike Napoli. Given that Napoli and his agent can do that same math, they would be almost guaranteed to accept the offer. If multi-year deals aren't on the table, the Red Sox basically have a perpetual team option.

If, however, a team views Mike Napoli as a reasonable three-year purchase--and at 31-going-on-32, he's still not too old to get an offer like that--then maybe a draft pick doesn't seem like too high a price to pay. Under those circumstances, the Red Sox would have to not only match the multi-year deal, but give up the possibility of getting an extra draft pick out of the equation. 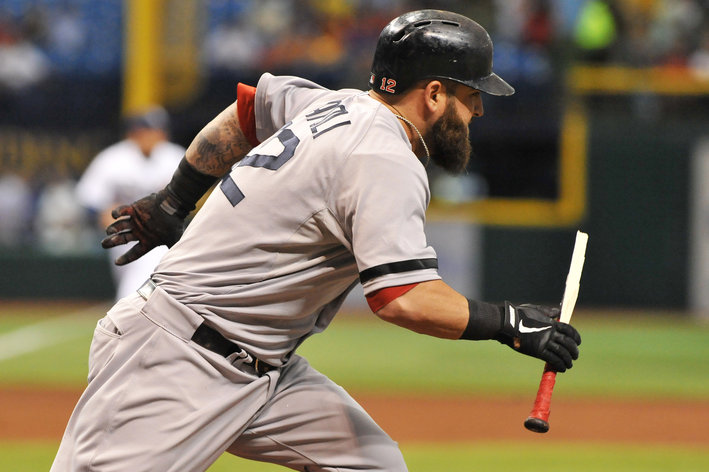 The clause for health finally kicked in, and Napoli's contract now hits its peak value.

Are the Sox willing to pay that price? They probably shouldn't be. For all that Napoli has been good for them, there are red flags that he's approaching a cliff. All those strikeouts on fastballs, for one. His strikeout rate is currently at a career-high 33%, with his average helped by a more-than-healthy .366 BABIP. To be fair to Napoli, it doesn't feel like he's been sneaking tons of ground balls through, ala 2011 Adrian Gonzalez, but it's not something to completely ignore, either. When he hits a pitch, he certainly hits it. It's just that he's been hitting fewer and fewer pitches he should since his fantastic 2011.

If there were no other options, and the Red Sox were desperate to keep the gang together 100%, then maybe they could consider going long-term with him. As is, though, if the Red Sox get the feeling that Napoli is going to be fielding offers on the scale of the three years and $39 million they initially offered him this past offseason, it's really hard to imagine that having Mike Napoli on that contract is better than letting some other team forfeit their draft pick to the Sox for the pleasure.