Greenville had the worst season of any Red Sox affiliate, but there were still players worth paying attention to there.

We're reviewing the minor-league season level-by-level to kickoff our off-season prospect coverage. On Tuesday, we checked in on the year that was for the short-season Lowell Spinners, bringing us next to the Low-A Greenville Drive. The Drive were the least successful of the Boston affiliates this year, as they finished with the worst record in the Sally League, and finished with just 11 more wins than the Spinners -- short-season Lowell plays nearly half as many games as the full-season affiliates like Greenville.

There are two simple reasons that Greenville was awful for much of the year: injuries and ineffectiveness. Sometimes, the two were intertwined, such as in the case of 2012 supplemental first-round selection Pat Light. Some players, though, such as shortstop prospect Jose Vinicio, seemingly just lost their ability to do anything positive while on a baseball field. Light is a reliever in the long-term anyway, so his awful introduction to full-season ball as a starter, while not optimal, is not the end of the world. But Vinicio was already repeating the level, and youth will not be on his side forever.

Others, such as Austin Maddox, played poorly until they found themselves in a role they were better suited for. Like with Light, Maddox's future is in relief -- he was switched there after performing poorly as a starter, and while he wasn't great out of the pen, his performance certainly beat the 7.76 ERA he posted in the rotation.

It wasn't all disappointment at Greenville, though. Justin Haley had a rough April and May in which he walked 37 batters in 42-2/3 innings. His control slowly improved as the year went on, though, all culminating in an August in which he struck out 39 batters against just nine free passes in 35 innings. After the all-star break, Haley was the owner of a 2.96 ERA, and the 2012 sixth-round pick is going to pitch for Salem next season -- that's not a bad campaign by any means.

Brian Johnson earned himself a late-season promotion to Salem with his performance, which, like many others, was interrupted by time on the DL. When on the mound, though, he was excellent, striking out a batter per inning while posting a 2.87 ERA in his 15 starts. The lefty Johnson, despite a line drive to the head in 2012 and time missed in 2013, is right where he is supposed to be, at Salem -- if he can succeed there like he did at Greenville, Double-A won't be far behind.

The most significant story for Greenville, of course, was second baseman Mookie Betts. While he was slow to start, with far too much passiveness at the plate that was helping his on-base percentage but harming the rest of his offensive game, Betts eventually exploded and mashed his way to a mid-season promotion at High-A. The near-900 OPS he posted in spite of a horrible start to the season is worth significant press, so if you aren't already familiar with him, you will be in the coming weeks and months.

After that, it was about small steps. Cody Kukuk, like Haley, couldn't find the strike zone often enough, but was mostly successful anyway. While he's not considered the same kind of prospect as Henry Owens, the lefty had a very similar season -- albeit a year older while doing it -- that Owens did in 2012. There's real swing-and-miss stuff here, and he was difficult to hit, in part because of the stuff but also because he was rarely in the strike zone. He's young enough and talented enough that he deserves some time to work things out before too much criticism is levied at him. 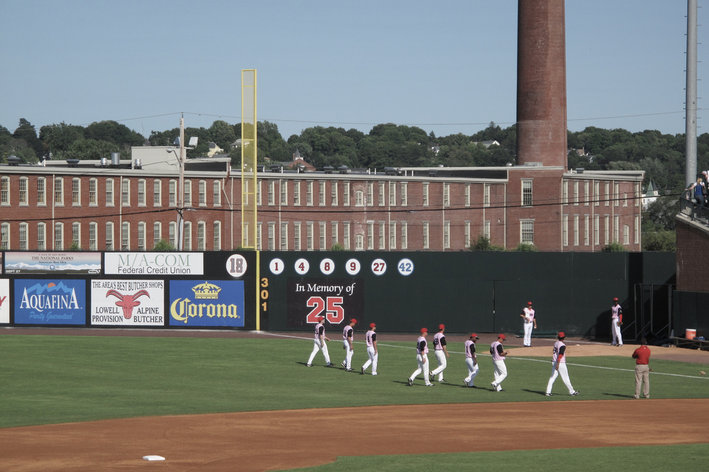 Lowell didn't hit much, but they sure could pitch.

Kyle Martin, selected in the ninth round of the 2013 draft, performed well with Greenville over 17 innings, striking out 15 batters against seven walks while posting a 2.12 ERA. There remains work to be done in his game, but considering where he was drafted, the fact he already jumped to Low-A with little in the way of trouble is encouraging. He didn't progress as far as Kyle Kraus did, though: the 2012 seventh rounder started at Greenville and dominated for 35 innings, and threw four shutout innings for Portland before he was shuffled around the lower levels until season's end. He'll likely begin 2014 at Salem once more, in an attempt to solve that level and bring his strikeouts back up.

While there was no major breakout besides that of Betts, and the team's record didn't reflect it, there was actually a lot to like about Greenville's season once you sort through the disappointment. Johnson is a legitimate pitching prospect who is basically forgotten about due to the sheer volume of upper-level arms, Haley looks like an intriguing pitcher with a potentially bright future, and Kukuk's full-season debut, while still raw, showed promise. The likes of Light and Maddox will need to give things another go in 2014, but with all of the pitching in the Boston system, and their relative newness to the organization, that's not necessarily a bad thing.