Lowell didn't hit much, but they sure could pitch.

The minor-league regular season is at an end, so it's time to look back at the year that was. The plan: to look at each level, one at a time, and pick out the stories and themes from the season. We'll follow up this series with additional looks at the top prospects, those who saw their stock rise or fall the most, as well as the rest of the categorical stuff you come to expect at year's end. For now, though, we'll do this thing team-by-team.

We'll start at the bottom, with the short-season Lowell Spinners. Boston's New York-Penn League affiliate finished tied for the fifth-best record among the 14 clubs, missing out on the wild card by two games. Their strong campaign was built on pitching and defense, as the Spinners' lineup produced a line that looked unimpressive even by the low standards of the New York-Penn.

That's not to say they were without any hitting whatsoever, though. Center field prospect Manuel Margot hit .270/.346/.351 with 18 steals in 26 chances, giving him an OPS 110 points higher than the league average -- he also managed the feat at the tender age of 18, with only Rookie-level ball to his credit entering the year. Margot hit even better after the all-star break, posting a .296/.351/.423 line in those 17 games. Remember, too, that Margot has plus range, and the potential to be an above-average defender in center -- there is more to his game than just his bat, even if he remains raw.

Carlos Asuaje, Boston's 11th-round pick from the 2013 draft, put up a respectable .269/.336/.368 in his 204 plate appearances. The 21-year-old isn't a serious prospect like Margot, but he is someone to keep an eye on, if only because the scouts who like him really like him.

Other than these two, the bright spots were almost entirely pitching. A pair of 2012 draft picks, second-round selection Jamie Callahan and fourth-rounder Ty Buttrey, ages 18 and 20 respectively, showed off some of what they are capable of. Callahan mixed in a poor start here and there, but for the most part was highly effective, and sometimes outright brilliant -- as he was the youngest pitcher in the entire league this summer, that's no small thing. Buttrey didn't show much in terms of swing-and-miss, striking out just 5.2 per nine, but he posted a 2.21 ERA and kept the ball in the park, managing to survive without the kind of game his potential suggests he has.

There was also Australian import Daniel McGrath, who dominated the GCL before a promotion to Lowell. While he finished with a 4.86 ERA, McGrath, like Callahan, is in his age-18 season, and missed a ton of bats while showing flashes of being far better than his overall numbers indicate. There was the Dominican-born 21-year-old Simon Mercedes, who punched out 3.4 times as many batters as he walked while posting a 3.13 ERA in his first professional season comprised of more than a handful of innings. 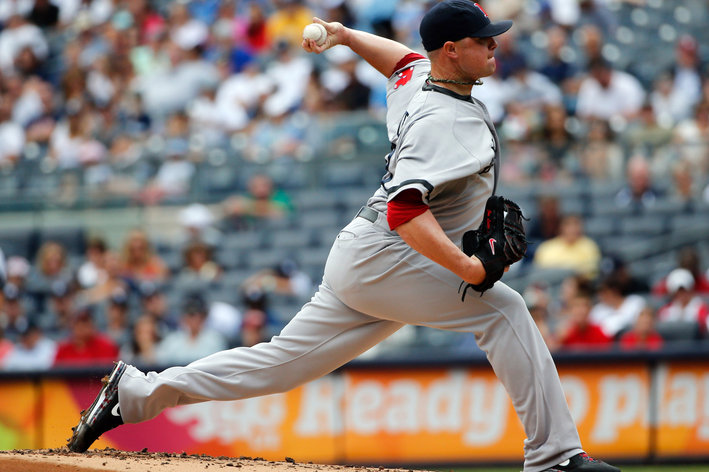 His resurgence has made him a valuable piece of the rotation once more, and Boston can keep him another year.

A pair of 2013 draft picks also got a chance to pitch for Lowell, with fifth-round pick Corey Littrell and second-round selection Teddy Stankiewicz pitching themselves into promotions for the 2014 season. The left-handed Littrell pitched in 12 games, racking up a 1.74 ERA and three times as many strikeouts as walks in his 31 innings -- the 21-year-old might even find himself in High-A Salem next year, considering his college experience versus the high school youths and international products who will be vying for rotation space at Greenville. Stankiewicz is one of those, as he's just 19 despite his status as a college selection -- his nearly 20 innings were pretty ones, with Stankiewicz issuing 15 whiffs against just two walks while limiting opponents to five runs.

It's hard to believe, but there's even more pitching that's worth noting at the level, thanks to a strong 2013 draft class. Reliever and ninth-round selection Kyle Martin dominated the New York-Penn League before earning a promotion to Low-A Greenville's pen, and Myles Smith, Boston's fourth-round selection, ended his season at Lowell after beginning it in the GCL in early August. While Martin is a reliever going forward if he's anything, and maybe one with platoon split issues, Smith was Baseball America's 108th-ranked prospect in this summer's draft -- there might be a pretty good starting pitcher here.