Felix Doubront should be bullpen bound

The Red Sox find themselves with some excess starting pitching with the return of Clay Buchholz, which means it's decision time. Moving Felix Doubront to the bullpen seems to be the best move.

Share All sharing options for: Felix Doubront should be bullpen bound

Tuesday marks the return of Clay Buchholz to the Red Sox rotation. Since making his last start on June 8th, he has missed a significant chunk of time, visited Dr. James Andrews, caught heaps of criticism from the super-tough among us in Red Sox fandom, and made three lackluster rehab appearances. By all accounts, though, he's ready to return, and his performance prior to being hurt gives him an automatic spot in the rotation.

As a reminder, the the right hander went 9-0 with a 1.71 ERA (243 ERA+!) and an 81/29 K/BB over 84-1/3 innings in the first two months and change of the season, racking up four wins above replacement on the year despite a lengthy injury. In something of a good problem to have, though, the Red Sox already have a full rotation, with spots being held by John Lackey, Jon Lester, Jake Peavy, Ryan Dempster and Felix Doubront. With Buchholz's return, the team will have to decide between going forward with a six-man rotation (or something following that premise), or moving one of those arms to the bullpen. If you asked me a few weeks ago, I would've said the easy move was to shift Dempster to a relief role. However, things have changed since then, and now the best move for the Red Sox would be to move forward with Doubront as bullpen help down the stretch.

After showing flashes of good things to come, albeit in an inconsistent manner, during his first full season in 2012, Doubront took a good step forward in 2013, showing improved command, keeping the ball in the yard, and pitching more efficiently. Unfortunately, it is looking like the full season -- with generally deeper appearances than we saw a year ago -- has taken its toll on the 25-year-old lefty. Fatigue caught up to Doubront last year as well, when he had a 5.13 ERA in six September starts before finishing up strong in his last pair. Now, he has struggled in consecutive outings, and has looked very bad in the process. With the team in the middle of a stretch run in which winning the division is vital, making quick decisions is important. To add to this, his velocity has dipped as the season has gone on, especially in his last five starts. This can be seen in the image below, which is courtesy of Fangraphs.

Velocity isn't the only sign of fatigue, though. When a pitcher can longer locate his pitches, and generally struggles through individual at bats and entire outings, it is a sign that the season's workload is catching up to him. This is something that has happened to Doubront over his last two starts. After getting his walk-rate down to 9.4 percent through the first four months of the season (down from 10 percent in 2012), he has walked just about a batter an inning in his last two starts, with seven walks in 7-1/3 innings. To make matters worse, he did it against the White Sox and Yankees, not exactly the two most imposing lineups in the game. Additionally, he lasted just 3-2/3 innings in both of those outings. This is after making it through just under six innings per start for the rest of the season. He was unable to put batters away, which led to pitch counts of 90 and 88 in two 3-2/3 inning outings, a sign of fatigue. 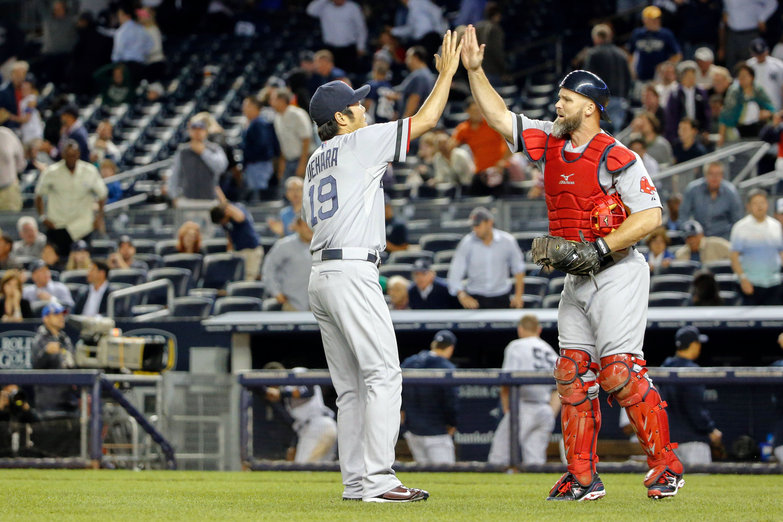 Moving Doubront into the bullpen also gives him a chance to get used to that spot, as he'll likely be there for the postseason anyway. In a five-game series, only three starting pitchers will be needed, and Lackey, Lester and Peavy already have those spots all but locked up. When a fourth starter is needed, the plan is for Buchholz to come in and take that spot, which shouldn't be too difficult given his past performances and experience. If things can work out like that, Doubront would be a perfect addition to a bullpen unit that has needed an extra spark. Though his command has looked weak in his past few starts, he wouldn't have to worry about needing to go multiple innings in his new role. Additionally, he hasn't limited his strikeouts, even during his downfall. He has struck out six in those last two outings, to go along with a 20 percent K-rate over the entire season. If he's able to let loose more in shorter stints, he would be a big help to the relief corps, especially considering the fact that Franklin Morales and Matt Thornton are the lefties being used in important situations, and rookie Drake Britton is the only other option.

Having too many starters to fit in one rotation isn't exactly a problem teams would complain about. However, it does comes with decisions that need to be made. As Buchholz returns, it seems like the team is holding off on dropping anyone from the rotation, and it will instead just skip Doubront's next start. This seems like delaying the inevitable, though. If Buchholz pitches his way into the playoff rotation -- a likely scenario given the few weeks left to get back to being Buchholz -- Doubront will find himself in the bullpen anyway, so it would be nice if he got his feet wet there in the regular season. If Buchholz struggles enough to lose a playoff spot, Doubront would still be able to shift back to starting games, plus he would get rest from the shorter outings while also getting work. It's a tough decision to make, especially after the clear step forward he made this year, but with Buchholz coming back tonight, it should be time to put Doubront in the bullpen for a while.