He's had his problems in the past, but the Sox kept faith, and might be rewarded for it soon.

Share All sharing options for: The transformation of Red Sox prospect Alex Hassan

Alex Hassan was Rule 5-eligible for the first time last November, and the Red Sox protected him. This was a perplexing move at first, but after letting the "why?" subside, and thinking it over, it made a lot of sense. Hassan had skills left to develop, sure, and there was a chance nothing would come from him. However, he also had immense pitch recognition and plate discipline, and even in a down year with little to no power output and a low batting average, he managed a .377 on-base percentage in his first year at Triple-A. 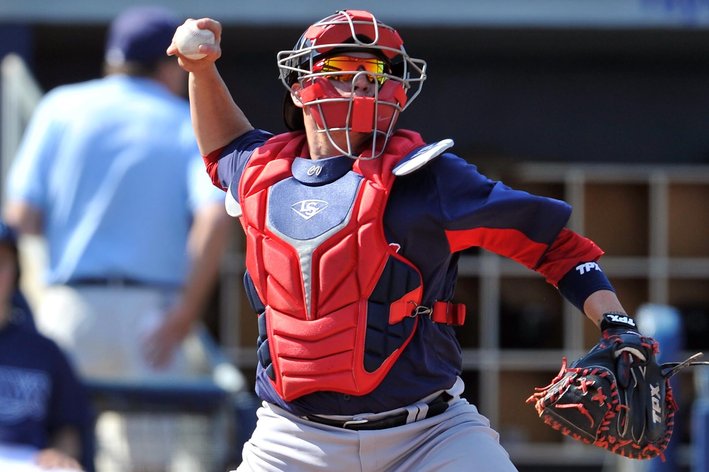 Cecchini slows down but there's still plenty to love, Vazquez's bat has him in line for a promotion, and Shaw hits homers, does little else.

The Red Sox are familiar with players like Hassan, as they were the ones who pushed Kevin Youkilis through their system with more fervor and hope than non-Billy Beane led organizations would have. That's not to say Hassan is Youkilis, nor is it suggesting he will be -- Youkilis was one of the game's best hitters during his peak, until injuries cut him down. It is meant to suggest that there's a lesson to take heed of there, though, that someone with the eye to discern what to swing at and what not to swing at, which pitches to drive and which to lay off of, has potential to be more than what their developmental stats suggest if they're able to bring the rest of the package up to speed.

Hassan had trouble hitting for power at Triple-A Pawtucket in 2012 at least in part due to issues of timing. He rarely used his lower half to drive the baseball, relying instead on his torso and arms to do all the work. His bat was a bit slow because of this, and even when he made contact, the results were more single than double and beyond. Even the uninitiated could see, though, that he knew how to work the count, and could get on base and even make contact. He simply needed to more consistently involve his legs in his swings if he was ever going to instill any kind of fear in the opposition: otherwise, that eye was going to mean very little, because pitchers would just challenge him within the zone where it was known he couldn't hurt them.

He's taken steps to combat this problem, in a literal and figurative sense. He now utilizes a leg lift rather than a toe tap, as Sox Prospects' Ian Cundall noticed when scouting the outfielder/first baseman recently. This better sets up his legs to be in sync with the rest of his swing, and allows him to drive the ball more consistently:

This small change has had a two-fold impact, as it has improved his timing at the plate and allowed him to get more leverage, and thus hit for more power. Hassan is much quicker to the ball and has shown the ability to drive the ball with backspin to all fields. To illustrate the second part of that point, Hassan has 20 extra-base hits on the season in 183 at-bats over two levels. Last season in 312 at -bats, he also had 20 extra-base hits.

His bat speed seems better, he can drive the ball further and more consistently, and hey, he already had the eye to figure out which pitches he should be attempting to crush. This ever-so-slight change has resulted in a .306/.416/.469 line for Hassan in 190 Triple-A plate appearances.

Of course, this is a fairly small sample, as it encompasses all of 46 games. It's worth paying attention to, though, because it seems as if something finally clicked for Hassan, and it's something we've been waiting to see click. It was no secret prior to 2013 that his legs and the timing and power they could produce were the key to his future as a professional baseball player, and he seems to have figured out a way to get them involved successfully.

On Daniel Nava and baseball players as people 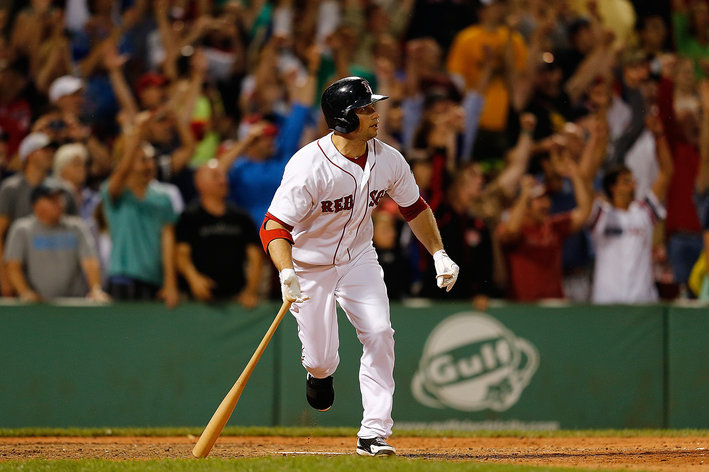 It's true, they are people with emotions and feelings and babies and lives, just like us.

What could Hassan do in the majors with this approach? It's difficult to project that, given he's 25 and again, we're talking about a small sample. But if he can keep it up throughout August, and come to the Red Sox as part of expanded rosters in September without looking too over-matched, then there is reason to believe he could be an above-average hitter in the bigs thanks to that eye. He doesn't have to be Youkilis to be successful: even Daniel Nava, a similarly versatile and patient late-bloomer, would be a worthy goal for Hassan to reach. Not everything a farm system produces necessarily needs to be a star to be useful.

That would give the Red Sox another low-cost, team-controlled option for first base, a corner outfield spot, and at designated hitter if and when that becomes a necessity. He's no given at any of those spots, not until he proves he could continue to hit for some power and make consistent contact over the long haul, but there's reason to hope here, whereas before it was more wishcasting than anything.