The Sox swap an injured southpaw for a healthy lefty before Thursday's game against the Astros.

Matt Thornton left Sunday's game against the Diamondbacks after suffering an oblique injury, and after tests on Tuesday, he's now headed to the disabled list according to Comcast Sportsnets' Maureen Mullen. Pedro Beato, who was optioned to the minors this past Saturday, will take Thornton's place on the Red Sox.

Thornton was acquired from the White Sox in July in exchange for floundering prospect Brandon Jacobs. The lefty was brought in to help fill the void left by the injured Andrew Miller, but now he'll need some time off to recover from this unexpected injury. The good news is that, this time around, the Sox have a lefty on hand to replace their injured southpaw: Drake Britton has allowed just one run to score in his first 11-1/3 big-league innings. 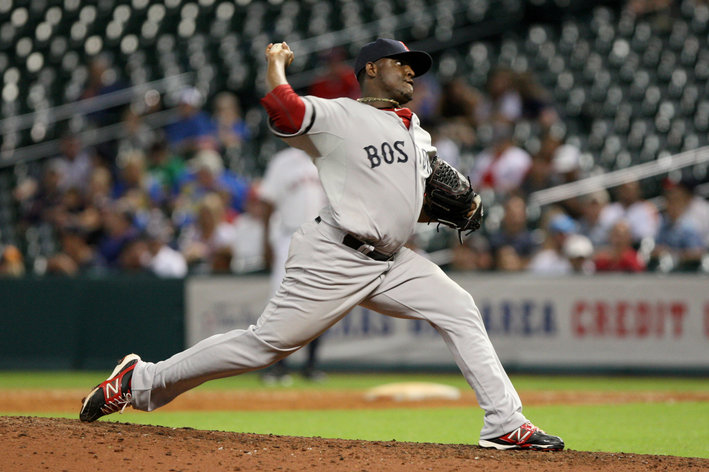 Nearly everywhere you look, there's a Red Sox pitching prospect who could be part of the future.

In addition, southpaw Franklin Morales is currently on a rehab assignment, and should be ready to return to the Red Sox sooner than later, giving Boston yet another option from the left side.

As for Beato, he gives the Red Sox a right-handed arm in the pen, which they might need over the next few days since Brandon Workman -- who was supposed to be that guy -- threw 91 pitches in an extended relief appearance against the Astros on Tuesday. With Workman likely unavailable until the weekend, that meant the Red Sox could no longer sit on Thornton's injury, as they would be down two bodies in the bullpen, and without a day off until Monday.

Beato has a 3.12 ERA in 8-2/3 innings and nine appearances with the big-league club. He's 26 years old, and back when he was with the Orioles in the early part of his career, was considered a prospect: he's pitched like one at Triple-A Pawtucket, and is getting another shot in the majors in the hopes it carries over. There's little rush to keep him in Boston permanently, however, as he's one of the few arms with options available to him -- that's how he ends up shuttling back-and-forth in the span of five days like this.