For Red Sox, top-of-the-order-production is key

Many speculated about starting pitching being a concern for the remainder of the season, but maybe the attention should be shifted to the top of the Boston lineup.

Share All sharing options for: For Red Sox, top-of-the-order-production is key

For the last month or so there's been plenty of talk about the Red Sox' starting rotation being a potential Achilles Heel for this year's team. On the surface you see a struggling Jon Lester and Ryan Dempster, and when you add in Clay Buchholz not pitching since early June, you can see why many thought of it as a serious issue -- particularly before the arrival of Brandon Workman, and why many were so anxious to trade for a starter like Jake Peavy. But when you look deeper into the actual numbers from the starting rotation, the pitching hasn't held the Red Sox back at all.

As a staff, the Red Sox have the third best ERA for starting pitchers in the entire American League at 3.88. Following Sunday's win, Felix Doubront, once viewed as the dead weight on the staff, has now gone 15 straight starts allowing three earned runs or less. Before Lester's outing Friday he had produced three quality starts in a row showing, if not top-quality, then at least consistently solid pitching. The Buchholz situation has improved as well, with the Red Sox hoping he will come back around the beginning of September. The right-hander was one of, if not the pitcher in the game before getting injured. Add in John Lackey's continued excellence and the fact that the Sox traded for former Cy Young Award winner Peavy at the trade deadline, and the starting pitching shouldn't be much of a concern.

What should be on everyone's minds instead is the production the team is getting out of their top three batters in their lineup. Since the All-Star break, these three have proven to be the barometer for Boston.

Below is a chart which shows the difference in batting average for the Sox' top three hitters in wins and losses in games since the All-Star break. It's easy to see just how important these players for the team and how key they will be in the final two months of the season:

Say what you will about batting average, but when there is a 163-point difference between games won and games lost over three weeks, that's hard to ignore. Unsurprisingly it also translates to runs scored per game, since the break the Red Sox have scored an average of six runs per game in games they've won, compared to just 1.7 runs in losses.

Shane Victorino is a classy dude 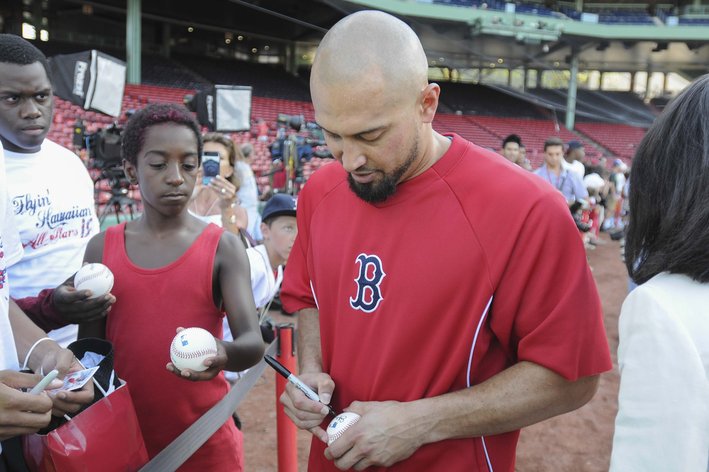 Victorino takes to Twitter to apologize for nearly hitting Brandon McCarthy in the head with a liner.

These numbers could be even more dramatic if Dustin Pedroia wasn't going through one of his biggest slumps of the year, hitting just .154/.233/.262 since the All-Star break. There really isn't much panic surrounding Pedroia--everyone trusts the second baseman to rebound in August. But the pressure is on Jacoby Ellsbury and Shane Victorino to continue to swing the bat like they have of late, as it is no coincidence the team has won five of their last six games -- a span which has seen Ellsbury and Victorino combine for 20 hits.

The top of the order, particularly the first two hitters, set the tone for the rest of the lineup. They have the most plate appearances each game, and If they can get on base they can make things happen with their legs and put themselves in a good position to be driven in. It also can't hurt to put a pitcher in a hole within the first few at-bats of the game, but ultimately you can't win anything without actually putting runs on the board -- it all starts with the top of the order getting on base to set the stage for the likes of David Ortiz.

With only two months left in the season, and the AL East race still as close as can be, the Red Sox are going to need to get everything they can out of the top of their lineup, particularly given how much better they are when those top three perform. Boston has managed to stay atop the division even amid the struggles of Pedroia, so if Ellsbury and Victorino can continue to prop things up and set the table while Pedroia finds his stroke, all should go well for the Sox.