Jake Peavy’s velocity is bouncing back, just in time

Jake Peavy is coming off of his best game of the season and the radar gun is offering Red Sox fans a reason to believe in the newest member of the rotation.

Share All sharing options for: Jake Peavy’s velocity is bouncing back, just in time

By acquiring Jake Peavy just ahead of the trade deadline this season, the Red Sox were taking a calculated risk. Peavy had missed most of June and half of July to a broken rib, and prior to the trade he had made just two starts after coming off the DL. With Clay Buchholz out indefinitely and a rotation spot tenuously resting on the shoulders of rookie Brandon Workman, adding a pitcher seemed imperative and, even considering the risks, Peavy appeared to be the best option after Matt Garza went to the Rangers. The Red Sox took on a hefty contract to get him, but lost just one player of any importance, sending Jose Iglesias to the Tigers. And, after a brilliant complete game performance against a powerful Dodgers club last Sunday, the deal is looking very likely to reward the Red Sox for their risk.

Peavy was one of the best pitchers in the game before a torn latissimus dorsi muscle cost him most of the 2010 season and seriously jeopardized his career. Following surgery and a fairly impressive recovery, Peavy returned to the mound in 2011 and struggled despite some encouraging peripheral numbers, posting a 4.92 ERA even with a 3.21 FIP and 3.52 xFIP. Things improved in 2012, however, as he managed a 3.37 ERA in, perhaps most importantly, 219 innings of work. He started off this 2013 season fairly well too, with a 3.38 ERA in April. But as pain in his side increased, his numbers started to suffer, and after a disastrous June 4 start in which he gave up six runs in 2 1/3 innings, it was revealed that he had suffered a broken rib. 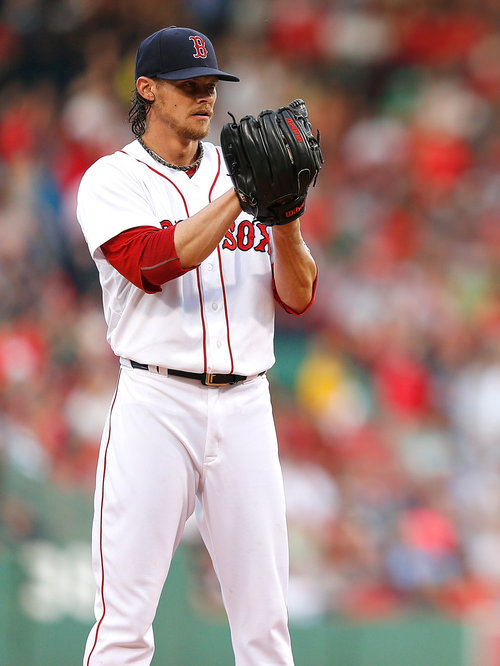 Unlike his lat tear, the broken rib should not have much impact on Peavy's long term success. However, in the short term, the rib has seriously skewed his 2013 numbers. So far this year, Peavy has an ERA of 3.99, which is fairly consistent with his FIP (4.02) and his xFIP (3.81). That is basically a league average pitcher, and given their need for a reliable starter, the Red Sox would be fine with that type of player. However, Peavy has actually been a bit better than that when you take away the time he was pitching while injured.

Peavy's last complete game before his Sunday gem against the Dodgers came on May 25 of this year. In that game he allowed just one run on six hits and two walks and struck out five, bringing his season ERA down to 2.97. His next two starts led up to his DL stint, and both were awful. After the June 4 outing, it was clear that something was wrong. While it is still unclear when Peavy broke his rib, the signs of his struggles actually begin even before that complete game against Miami.

This season, Peavy has averaged 91.4 mph on his four-seam fastball and 91.5 on his sinker (according to the Pitch F/X data at Brooksbaseball.net). However, as this month-by-month chart from Brooks Basebal shows, the time around the rib injury is dragging those numbers down fairly dramatically. 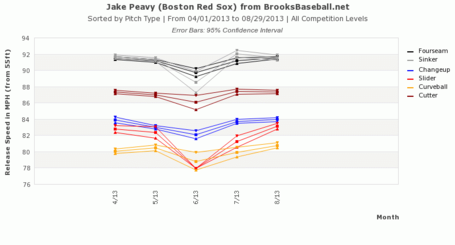 Peavy was averaging slightly faster on both pitches through the first month of the season and his velocity plummeted in May, dropping from a peak of 92.1 mph on his four-seam and 92.4 on his sinker in his final April start to just 89.7 (four-seam) and 88.5 (sinker) by the time he hit the DL. Losing two to three miles of velocity from season to season is typically too much for most players to overcome, and Peavy lost that much in a single month.

This collapse in his velocity may be the best thing that could have happened for Boston. Peavy came relatively cheap (especially when compared to Matt Garza) in part because his numbers this season were down as a result of almost a month of pitching with less than his best stuff. In July, Peavy made two solid starts, proving that he was healthy enough to be a valuable addition, but his velocity had not completely returned. Since joining the Red Sox, he is once again throwing at 91.5 on both pitches and, as he's becomes more consistent, the results seem to have followed.

Peavy's velocity has continued to fluctuate even in August, which is fairly normal, but the degree of variation has been fairly small except for a drop on August 20 during a 10:15 p.m. EST start in San Francisco. 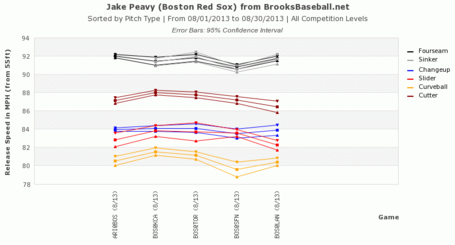 With this resurgent velocity, Peavy has once again been significantly better than league average. His ERA in August is nearly a mirror image of his April pre-injury performance at 3.31 even though his strikeouts have yet to rebound to his early-season levels. Some regression could be an issue--he has a .232 batting average on balls in play in August with a 3.86 FIP and 4.17 xFIP for the month--but the negatives are likely to be at least somewhat balanced out by more Ks. His rate on the season is 21 percent even with his struggles, just a tick under his 23 percent career strikeout rate, but in August he has punched out just 16 percent.

The timing for this recovery is perfect for the Red Sox. September will feature a huge number of games against division rivals, but just three games against their closest competitor, Tampa Bay. The Rays will play an easier schedule, putting the pressure on the Red Sox to hold on in this last month. If Clay Buchholz does return, he will re-join a rotation that currently seems to lack a true ace, but features three solidly above average arms in Lackey, Peavy and Doubront. With so much at stake over the last month, Jake Peavy has an excellent opportunity to be the difference maker the Red Sox were looking for.