Getting over Carl Crawford

Share All sharing options for: Getting over Carl Crawford

We can take off the black now. It's been a year, the official mourning period is over, and we can get back to our lives. The Red Sox' 2013 season began the second Adrian Gonzalez, Josh Beckett and Carl Crawford were traded to L.A. in the Nick Punto trade, and the rest was the lame-duck period. The nightmare was over, and Bobby Valentine, designed to be hung out to dry if necessary, was in fact hung out to dry, only the Red Sox made sure he fell, a Connecticut tomato smashed under the tires of cars blaring WEEI on the Mass Pike.

We have two choices: Get over all of this now, or reserve the right to hold onto it. I suggest we do the first. When Carl Crawford speaks about his time in Boston, let's change the channel. Let us be the change we want to see in the world. The pennant chase is approaching. It's time to live in the present. The gambler's fallacy that the Red Sox are "due" for a good stretch run applies: Nothing is guaranteed. That's the bad news. The good news is that this team is considerably more talented than those of recent years, and that Dustin Pedroia always rakes in September.

Nonetheless, if the Dodgers continue to set fire to the National League through the first few rounds of the playoffs, we'll eventually hear someone on the Dodgers say something the least crosswise about his time on the 2012 Sox. Let's put that in the past, starting now. This could be the 1991 Twins -- an electric baseball team even before its final two games -- all over again, a legit, badass worst-to-first champion, and not just worst to first-rock bottom to the very top. The historical record won't be determined by something Carl Crawford said when he had a microphone shoved in his face. It is a real-life chicken-and-egg scenario: If we are not there to care about it, it does not matter what he said.

Jackie Bradley Jr. key for the stretch-run and offseason 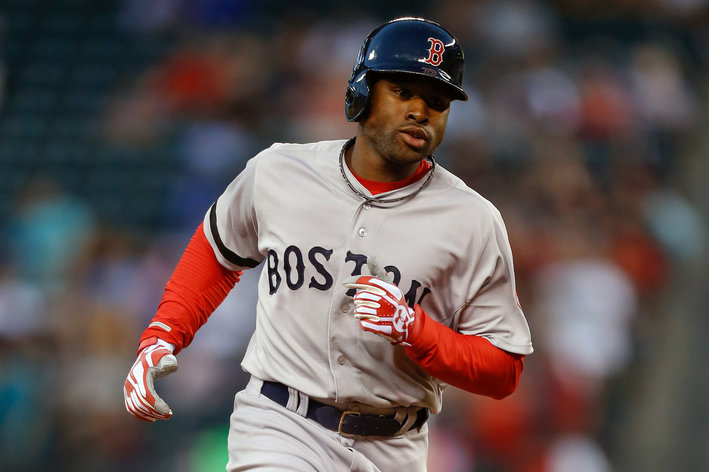 Jackie Bradley has been out of many people's minds while he has gotten some seasoning in at AAA Pawtucket. Now, however, he has a chance to play a big role in September, and the winter activities.

We're Red Sox fans. Is this how we want to be known? Is there just a small chance we're underestimating how hard it is for a player to be loathed by the entire northeast corner of the country because his team signed him to a stupid contract? I say there is. Your counterpoint could be: Sure, but fuck him. Which I would happily grant, on the condition that we stop talking about it and move on. We're being bullies. The terrible numbers Crawford put up in a half-season don't really mean anything, and he can't change them. If we had signed him cheap and kept him and he bounced back this year, well, problem solved, no one cares, but that's not what happened.

If anything, our focus on Crawford is insane largely because the Dodgers are so much more than just him; it was the sine qua non of our turnaround, but mere details to L.A.'s. The Dodgers are amazing. Clayton Kershaw might walk to the MVP award, and Zack Greinke is doing the damn thing. There's Puig and Hanley and Ryu and the Boston Boys. All that's off the top of my head. They could easily be "peaking early," but they could just be this good. Could the Red Sox beat this team? Absolutely. Could they lose to this team and live with themselves? Yes. Even if Carl Crawford walked it off?

Yes, it would be tough. But that's just as silly to think about now as it is to dwell on the feelings of a guy who escaped a shit situation to get to a great one, when, well, shit situations are shit. Carl Crawford can't get over it until we do, and not the other way around. September's here, so let's get on with it.