There's no denying that Mike Napoli is not having the best year of his career. Whether it's the hip or the feet, or just the general decline that comes from aging that's to blame, Napoli's numbers are not what Red Sox fans might have hoped, and with him accruing these numbers in the most frustrating fashion possible (strikeout after strikeout after strikeout), it's not hard to see why some have soured on him.

If history is any indication, however, it's still not time to give up on Mike Napoli. Because September? September is his month. In 440 career plate appearances, Napoli is hitting .293/.386/.614 in the last month of the season. Whether that's because he gets geared up for the stretch run, enjoys the cooling weather, or is a Virgo at heart is unclear. But when crunch time arrives, Napoli rises to the occasion.

"But wait," you might say, "even if Napoli's done that in the past, he sucks this year! No amount of magical month-based mojo can save him!" Well, tell that to all the Mike Napolis (Mike Napolii?) of seasons past. Let's go to the super cheap-o OpenOffice chart: 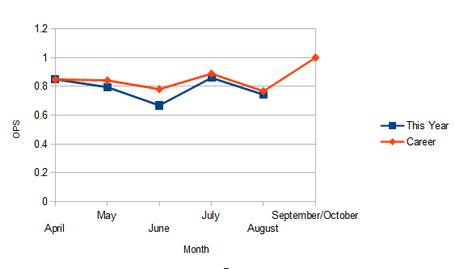 Napoli hits one over everything 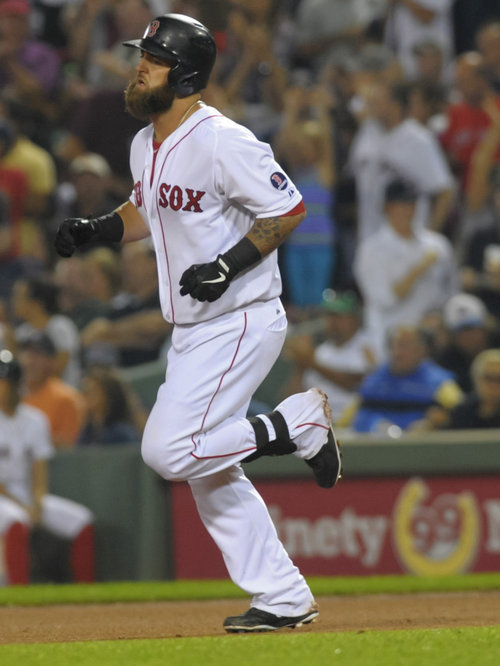 Is Napoli worse than usual? Absolutely. His May and June dips were both exaggerated, and he's come up very slightly short in both July and August of his career norms, but come on, is that eerie or what? If this is not Mike Napoli's best year, it's still an incredibly normal one, following all the usual hills and valleys. And it's not like the signs aren't there, either. You saw what he did on Sunday and Tuesday. A pair of monster 400+ foot bombs are a pretty nice way to announce your intentions.

Is Mike Napoli about to destroy the league to the tune of a .429/.518/.843 batting line like he did in 2011? Probably not. As much as we would like for that to be the case, that Napoli is likely well-and-truly gone. But after another August swoon--one the whole team seemed to go through--Mike Napoli is headed into what is traditionally his best month. And having his bat working even just as well as it was in April would be a massive help as the Sox look to lock up a playoff spot.