Video: Mike Napoli hits a ball over everything

Green Monster or no, this one was gone from every park in America.

Share All sharing options for: Video: Mike Napoli hits a ball over everything

Mike Napoli has had his issues in 2013, thanks to a lengthy bout of plantar fasciitis, but when he's feeling it, the dude can just outright smash. We got a reminder of this on Tuesday against the Orioles when Napoli was up against Wei-Yin Chen in a game that, at the time, was just 3-2 in favor of the Sox.

Napoli just straight-up sends a ball into orbit, and it comes down after clearing everything. If it had cleared anything else, it would have broken someone's windshield on the Mass Pike:

The video doesn't show it in real-time, but this GIF will give you an indication of where it landed:

It lands on the Lansdowne garage across the street from Fenway Park. That's over the t-shirt vendors, over the Sausage Guy, over the dudes with the upside-down buckets they're playing as drums. It's on top of the garage. Amazingly, Hit Tracker has that garage structure built in to its Fenway diagram: 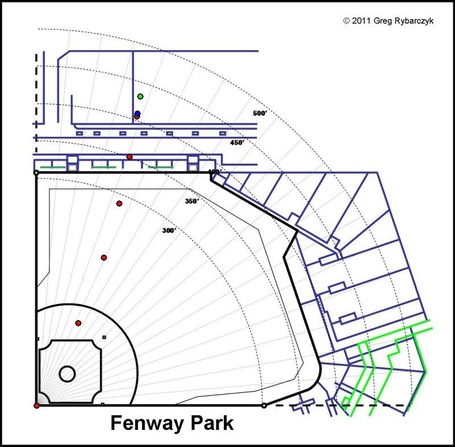 It's been an up-and-down season for Napoli at times, but this shot was all up.