A look back at four at-bats from the 20-year-old prospect's most recent game against the Dodgers, and where he fits into the team going forward.

There are a million different ways to start of this article, but the essence is that it's great that Xander Bogaerts is up because now we can all watch him play baseball. No more checking out SeaDogs.com or, more recently, Pawsox.com every evening to see how he fared. Now I just turn on my TV, or more realistically, my computer, and I watch the 20-year-old phenom do his thing.

As Bogaerts is up, likely for good, this past weekend offered the best chance to see him for many Sox fans, and he didn't disappoint. No, he didn't launch 450-foot bombs -- not everyone arrives like Yasiel Puig -- but what he did do was impressive. Over the four games he played in the road trip, Bogaerts was 3-for-9 with one strikeout and one double. In numbers, that's a .333/.333/.444 slash line. Of course, we're talking about nine plate appearances, but even in that small sample Bogaerts is more than holding his own.

Bogaerts has played in four games, but he's started just two. As the first start was his first major-league game ever and the last start was the most recent game the Sox have played, I wanted to take a look at the most recent start, the Red Sox 8-1 win in L.A. on Sunday night, and see what we could learn from his four plate appearances.

Bogaerts came to the plate against Dodgers starter Chris Capuano in the second inning. Curt Schilling made the point during the previous at-bat (a Jarrod Saltalamacchia strikeout) that, due to the evening start time, Capuano had the benefit of pitching in the shadow while the plate was still in the sunlight. That made it harder on the hitters to pick up the ball. In any case, Bogaerts took four straight pitches, a sinker for strike one, then three straight changeups that brought the count to 2-2 before grounding weakly to third. He hustled down the line and it was close at first but ultimately it was a routine out at the major league level. 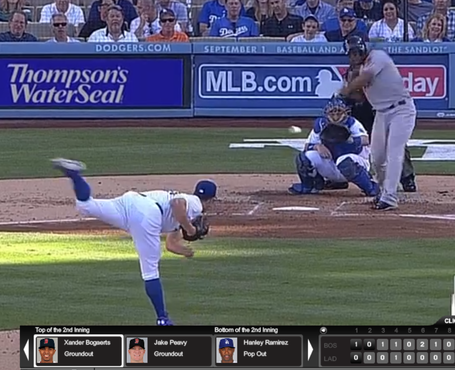 You can see from the screengrab of ESPN's telecast (as are all the screengrabs below) that the ball was on the inside corner. Brooks Baseball confirms this, as does the location of the catcher's mitt. Bogaerts wasn't able to get the fat part of the bat inside enough (see how his arms are tight to his body) and topped it weakly to third. Still, he showed patience waiting for his pitch and not swinging at anything when he didn't get what he was looking for until the count and pitch forced him to do so. Ultimately, it was good pitching by Capuano.

The second at-bat is likely what people will remember when they think of Bogaerts' performance on Sunday. Like in the first match-up, Capuano started Bogaerts off with a sinker, only, unlike the first at-bat this one stayed up in the zone. Bogaerts correctly identified this as a pitch he could hit, got the bat through the zone, and lined it hard to right center field. Center fielder Skip Schumaker bobbled the ball allowing Will Middlebrooks to score and Bogaerts to go to second. They gave Bogaerts a double but that was a charitable ruling. The important part was that Bogaerts got a pitch to hit and he hit it. 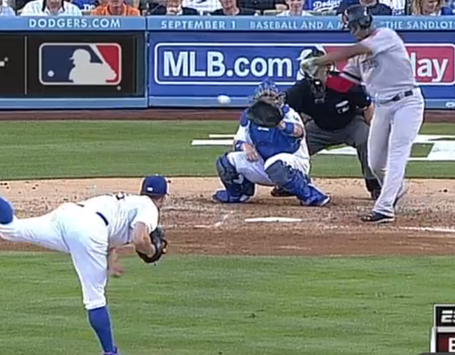 You can easily see the difference in the two pitches Bogaerts has put into play to this point. The first at-bat was a good pitch by Capuano, a pitcher's pitch in a two-strike count. This wasn't a horrible pitch, but it wasn't a particularly good pitch either. It was a belt-high sinker on the outer edge, location being its only redeeming quality. I don't have GIF ability but if I did you'd see catcher A.J. Ellis' glove rising to catch the pitch, indicating he was hoping it would be delivered lower in the zone. Still, not every pitch can be perfect, so when presented with mistakes, good hitters need to hit them, and in this instance Bogaerts did.

His third time up, Bogaerts faced a right-handed pitcher for the first time that game in reliever Chris Withrow. Withrow started Bogaerts out with three straight sliders. The first one didn't break a ton, but Bogaerts took it as it was outside. The second one looked like it was going to be a strike but broke outside and away and Bogaerts swung and missed. As pitchers are wont to do with rookies, Withrow challenged Bogaerts to hit the pitch he just missed. He threw the same pitch again and Bogaerts swung and missed again. Having thrown two straight sliders for two swing-and-misses, guess what Withrow threw on pitch four? Yep, another slider. This was the worst slider Withrow threw, as he left it out over the plate. Still it was the pitch that Bogaerts had just missed twice. But, to his credit, Bogaerts managed to foul this one off.

Withrow then went to a fastball, 97 mph in fact, but missed up and inside, close to hitting Bogaerts. It's hard to tell if it was a brush back pitch, but considering he'd just thrown three sliders that broke way from Bogaerts, pushing him back off the plate wasn't a bad idea. So, three pitches away, one inside to get him back off the plate. What do you throw next? A curveball of course, the pitch that looks like it's coming inside and goes outside, playing off the fear of that fastball he just saw. This is the kind of pitch I've never understood how a major leaguer can hit. So if there is any doubt that Bogaerts is a major leaguer, let it rest now, because Bogaerts hit it and hit it hard.

You can see the ball just above the 'o' in ".com" on the backstop. It wasn't the hanging curve I thought it was upon first seeing it. It was probably higher in the zone then Withrow wanted it to be, but this was a rookie who had just missed on two sliders and almost eaten a fastball up and in. He wasn't going to hit even a decent curve out over the plate. No need to bury this one. 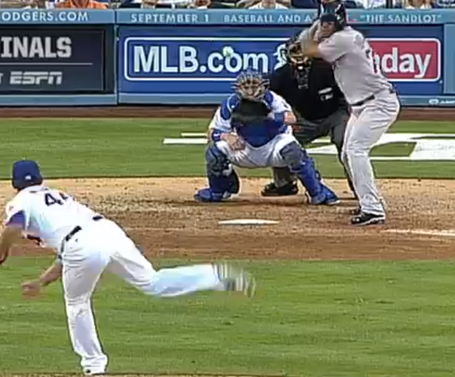 Except maybe he should've buried it. Bogaerts took the pitch and lined it hard the other way. The baseball is visible, a white blurry underline beneath the "ML" part of MLB.com. 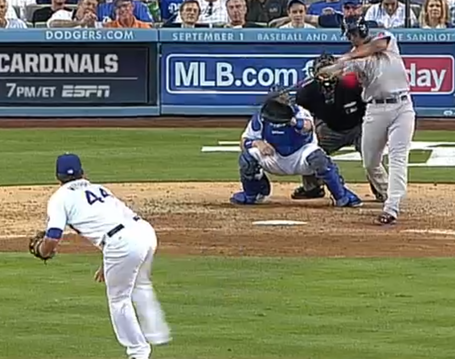 The sad part was that, as good a hitter as Xander Bogaerts is, Adrian Gonzalez is a very good fielder. Gonzalez laid out and made the grab on what would have probably been a line drive double down the right field line.

That was probably Bogaerts most impressive at-bat. He showed weakness in missing the sliders, but was able to foul one off and force the pitcher to switch tactics. Then, he wasn't intimidated by a fastball up and in and hit a curve hard, even though he hadn't seen that pitch yet from the pitcher.

In the eighth inning, Bogaerts came up one final time, this time against Carlos Marmol, another right hander. Marmol started Bogaerts off with a 93 mph fastball up in the zone for a strike. It is the second fastball Bogaerts has seen all night and the first he'd actually had an opportunity to swing at. The next pitch was a nasty slider that Bogaerts tried to check his swing on but wasn't able to. The result was an awkward looking half swing that put him down in the count 0-2. So, in a pattern that not only with Bogaerts have to get used to but so must we, along came another slider. This one wasn't the nasty pitch the first one was though, and, even down 0-2, Bogaerts didn't miss it, lining it hard into right center field. 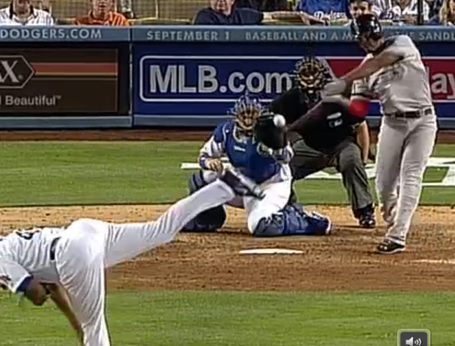 Overall, Bogaerts went 2-for-4, but hit the ball hard three times. He hit solid line drives off a slider, a curveball, and a sinker. He had success against pitches after failing against those same pitches. He hit a lefty and two righties. He demonstrated good plate patience, but wasn't passive at the plate. He had a good night.

All that got me to thinking about what role Bogaerts should play the rest of the way. Ideally you'd like a young player like him to play every day when called up to the majors. You don't call someone of Bogaerts ilk up to sit the bench, but the issue is really total playing time. The Triple-A season is almost over, so if Bogaerts only plays two out of every five games in the majors he'll get about the same amount of work in that he would have had he stayed in Pawtucket due to the longer major league season.

But how do the Red Sox juggle him and Stephen Drew? It sounds like a problem, but really it isn't. Bogaerts is just a rookie, so he's not expecting to play every day. Drew isn't the type of guy to throw a hissy fit over slightly reduced playing time, and he's not a boat-rocker anyway. So, thanks to Bogaerts, the Red Sox are left with two good options at shortstop, two good options at third base, and if they want, another option at DH or as a pinch hitter. Now they can keep Drew and Middlebrooks fresh, they can play home/road, pitcher type match-ups, and they can even give David Ortiz a rest if they want to. Depth is a wonderful thing, no?