After struggling in the early months of the season, Jacoby Ellsbury has rebounded in a major way.

Early this season, Jacoby Ellsbury was struggling. On May 24, I took a fairly in-depth look at those early season shortcomings. Ellsbury was hitting .249/.317/.338 at that point and for the month of May, he would end up being 17 percent worse than the average hitter by weighted Runs Created Plus (wRC+). At that time, I pointed to a lack of success in pulling the ball, resulting in a high frequency for ground balls and pop ups to the right side of the field.

A little more than two months later, Ellsbury has turned things around dramatically. He hit .360/.414/.480 in the month of June. His success continued into July and he found his missing power stroke along the way, hitting .312/.360/.484 with four home runs, after putting just one ball in the seats in the first three months of the season. His line is now .296.356/.423 for the season, right in line with his career norms. Combined with his excellent glove work in center, that gives him the team lead in fWAR with 4.6 and makes him the 10th most valuable player in the American League by that measure. Despite those early season woes, Ellsbury has already made 2013 his second most productive season as a major league player and probably earned himself a payday in excess of $100 million in the process.

Given the nature of his April/May slump, it isn’t particularly surprising that Ellsbury has bounced back so completely. In those early month, Ellsbury was putting 73% of pulled balls in play on the ground, a huge jump up from his 63% career rate. That jump was almost entirely at the expense of line drives to the pull side and that has traditionally been the most important source of power for Ellsbury. Simple regression may be enough to explain the month-to-month variations, but there are some important differences in what Ellsbury is doing now.

First, Ellsbury has been much better at handling pitches inside and pitches up in the zone. (pitch F/X data care of brooksbaseball.net) 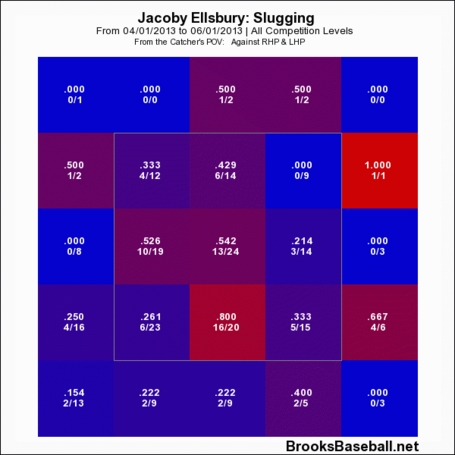 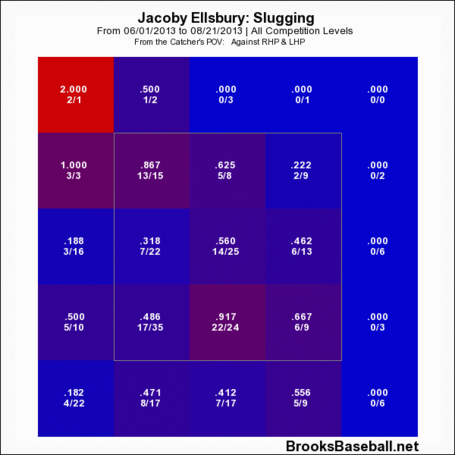 Up and away was a vulnerable area for Ellsbury in those first two months. He hit .333 in the top, outside corner, but failed to get any extra base hits and around that area outside of the zone, he was also lacking in pop. Now pitchers should avoid that part of the zone like the plague. Ellsbury is hitting everything up and away and he is hitting it hard. On pitches inside, the top of the zone remains one of the few holes in Ellsbury's swing, relative to other areas. That is a tough spot for pitchers to hit, however, and missing there against Ellsbury is dangerous. He rarely offers at pitches that miss up and in and any pitch that gets too much plate up or ends up low and inside plays to his strengths.

The other difference maker for Ellsbury may be a mechanic correction. In the comments of my article earlier this season, Shield Wall, one of the many intelligent and insightful people in the OTM community, observed that Ellsbury appeared to be pulling his hips out frequently- a possible cause of his ground ball tendencies when hitting to right field. Shield Wall posted this picture in the comments thread to illustrate his point. 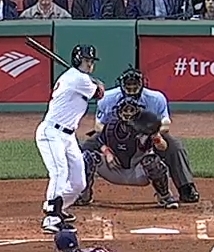 This explanation seems fairly compelling now that Ellsbury is back in the groove. Compare the direction of his hip in the photo from Shield Wall to this still from his second home run of the day on August 6. 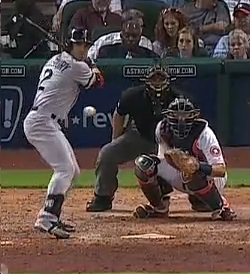 Ellsbury keeps his hips pointed straight ahead here, right up until the point as he begins his swing. This turns his upper body back away from the pitcher, providing more torque and preventing his hands from being forced over or under the ball. So rather than potentially popping up this middle-up offering, he is able to put the full force of his swing into it and send it deep into the upper deck.

Ellsbury has become more consistently neutral with his stance as the season has progressed and outside the month of May it becomes difficult to find at bats where his hips are in the position shown in that first picture. Baseball mechanics are complicated and even great players like Ellsbury can slip out of their swings momentarily. This issue may not explain all of his May slump, but it appears to have contributed to his difficulties when going to right field.

The overall result of Ellsbury's re-tuned approach is an increase in power. Ellsbury's strength as a hitter is his ability to use the whole field and even when he was struggling, he was fairly successful when going to the opposite field or up the middle. Now he has added back his pull power to that mix. (care of Texas Leaguers)

Ellsbury's resurging bat couldn't come at a better time for him or for the Red Sox. He may never reach the heights of his 2011 season again, but Ellsbury is still an elite talent and one of the best all-around players in the game.