John Farrell has done a fine job leading the Red Sox to unexpected highs this season. However, his biggest test is coming up, as he'll have to figure out how to best utilize the offensive pieces to catapult the Red Sox into the stretch run.

Over the past few days, there has been an increase in talks about how John Farrell has performed as the Red Sox manager this season. Recent events -- namely using Brayan Villarreal in a tie-game in the bottom of the 9th one night then using Koji Uehara with an 11-run lead the next -- have made this conversation focus around his management of the pitching staff. However, with the way the roster is currently constructed, Farrell seems to have his toughest job ahead of him on the other side of the ball.

The biggest reason for the team's success this year has been its ability to get production from the most unexpected places, and this leads to the manager needing to find ways to get playing time for everyone. It's certainly not the worst problem an MLB manager can have, as it's an indication of success, but it can get very complex. For Farrell, there is one way which would best utilize everyone's skillset while also giving them a satisfying amount of playing time.

The easiest of the rotations on the diamond would probably be at shortstop. This job has been in a rotation of sorts for much of the season, dating back to when Jose Iglesias was infield-singling his way into all of our hearts. Now, after receiving pretty much all of the time at shortstop since the Peavy trade, Stephen Drew finds himself with more young talent breathing on his neck, this time in Xander Bogaerts. Now, the situation here should be relatively simple, as a simple, pure platoon would work very well. While it'd be tough to complain about what Stephen Drew has given the team this year, they are probably better off sitting him against lefties. This season he has hit .193/.246/.342 (53 wRC+) against southpaws compared to his .274/.366/.462 (124 wRC+) line with righties on the mound. Though Bogaerts didn't display any overly noticeable splits in his time in the minors, for now it'd be safe to assume he'd be the better option against lefties until it's proven otherwise. In those situations when the opposition has a left-handed starter, the Red Sox will always have the option to bring Drew in for the end of the game, too, since his glove would be preferable to Bogaerts' at this point.

The other portion of the left side of the infield isn't so straightforward, since having two right-handed hitters isn't exactly conducive to your traditional platoon. One also has to consider the fact that the two options at this position, Bogaerts and Will Middlebrooks, are both young players whose development isn't helped by sitting on the bench. In this scenario, things are obvious at third base with a lefty on the mound, since Bogaerts will already be at shortstop. This gives the Red Sox two potential right-handed power bats on the left side of the infield to send up against lefties. With a right-hander on the mound, though, it becomes a bit more complicated. In this case, Farrell should attempt to give Middlebrooks somewhere around two-thirds of the playing time, at least for now. When the team called up Middlebrooks over Bogaerts a couple weeks ago, it was a smart move on their part due to the importance of the former to the near-future of the franchise. Since being called up, all Middlebrooks has done is hit .441/.558/.706 in 11 games. It'd be unfair to cut his playing time too much just because Bogaerts is up. This plan would still give Bogaerts three or four starts a week, enough to justify him being here rather than Pawtucket while not punishing the two incumbents who have done nothing to deserve it. 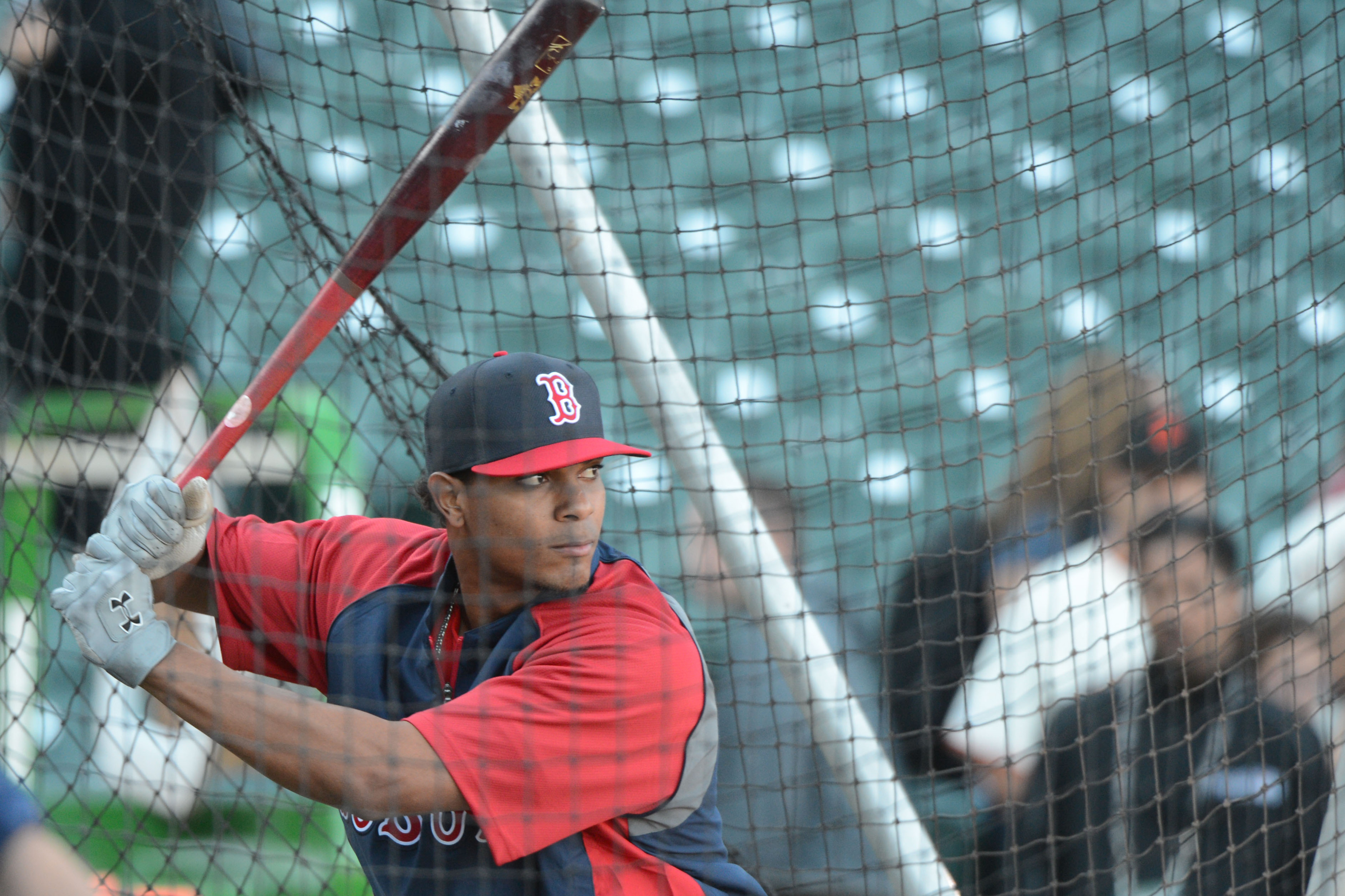 Much like shortstop, something close to a traditional lefty-righty platoon should work out well in left field. When a left-handed starter is on the mound, there is little reason not to start Jonny Gomes. The one deterrent to this would be his defense, but most parks don't have an overly demanding left field, especially Fenway, and even so his offensive ability would typically outweigh his defensive shortcomings. A big reason Gomes was brought in this winter was his ability to crush left-handed pitching. Though his numbers against southpaws this year are actually quite low (.203/.331/.390 95 wRC+), his .230 batting average on balls in play is probably a large factor to this. That number should surely regress, leaving him as the best option against lefties. 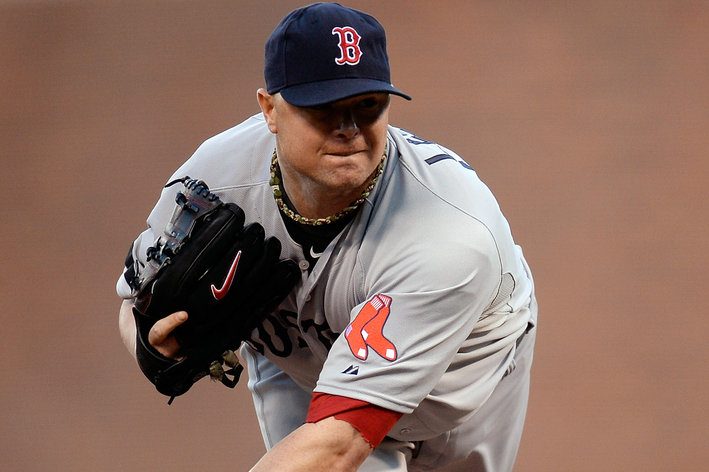 When a righty is on the mound, the options boil down to Daniel Nava and Mike Carp. It would be smartest for Farrell to lean more on Nava, who has hit .311/.405/.464 (138 wRC+) against righties in more consistent at bats than Carp. While Carp should still get some playing time in these situations, the majority should go to Nava due to his more consistent approach -- which is a big help in this lineup that has a tendency to turn very undisciplined -- and his superior defensive skills. Once September hits, Jackie Bradley would enter the conversation as well, but he'll likely be used more often to spell Shane Victorino and Jacoby Ellsbury, as well as serve as a pinch runner and defensive replacement late in games.

This is a position that has been the topic of much ire recently, mainly because of the strikeout machine known as Mike Napoli. He of the 33.6 percent K-rate has definitely had some recent struggles, but he still posses a power bat and a well-polished approach at the plate that allows him to get on base. With Nava and Carp as the other options to back him up, Napoli is still the clear choice against lefties. When a right-hander on the mound, though, both backups may be better options. However, if the Red Sox are going to be successful in the playoffs, Napoli's power bat in the middle of the order could very well be a big part of it, so sitting him for long stretches wouldn't behoove this team. Carp still deserves some playing time at first against right-handed pitching, but it shouldn't be as much as Napoli, who will ideally still get the majority of the playing time at the position.

As can be seen, John Farrell has his hands full trying to find the best lineup combinations on a daily basis. Of course, there will be some injury concerns and past performance that will dictate the lineup on specific days, but I feel this rough outline would be the most effective utilization of the lineups down the stretch based on the handedness of the opposition's starting pitcher. Unfortunately for him, Mike Carp likely gets the shortest end of the stick here, despite hitting surprisingly well this year. In this scenario, he's held to being mostly Mike Napoli's backup -- playing first whenever Napoli is struggling and needs a few days off -- and serving as a late-inning pinch hitter when a right-handed reliever is on the mound. For all the talk of his bullpen management, John Farrell will likely be a larger factor for the rest of the season based on how he handles the lineups everyday.