Share All sharing options for: Will Middlebrooks making the most of his second chance with Red Sox

Will Middlebrooks' sophomore season hasn't gone as hoped. After an impressive rookie campaign where he hit .288/.325/.509 with 15 home runs in just 75 games before missing the last few months with a broken wrist, Middlebrooks was expected to be one of the biggest contributors to the Red Sox offense this season, especially from a power perspective, hitting behind David Ortiz and Mike Napoli.

Read More: Xander Bogaerts so excited to play for Red Sox he couldn't dress himself

Unfortunately, things didn't go so well for Middlebrooks to open the year as the 24-year-old hit .194/.223/.418 in 25 games. Although he hit six home runs in the month, three came in one game in the first weekend of the season in Toronto. Aside from struggling on the field, he was also battling a back injury, which ultimately led to a DL-stint from May 24 through June 10. At the time of going on the DL he still wasn't hitting any better than in April as his line read .201/.234/.408 with just one long ball in May.

After returning from the DL, Middlebrooks went just 4-for-29 with just one home run in eight games. It was then determined it would be best for the third baseman to be sent down to Pawtucket where he could get more consistent at-bats as he wasn't playing everyday thanks to the emergence of Jose Iglesias, but more importantly to get back to how he was performing as a rookie. Middlebrooks spent almost two months in Pawtucket, where he hit .268/.327/.464 with 10 home runs in 45 games, but this may have been the best thing for him. The experience changed his outlook on the game, as he's now a much more relaxed player, and one not taking anything for granted.

Middlebrooks was recalled on August 10, and since then he's been a completely different hitter. He's reached base in all 10 games since, including hitting in eight straight contests before failing to record a hit Monday night. Over these 10, he's hit .452/.538/.645 with four extra-base hits, bringing his OPS+ up from 64 to 87. He's looked much more relaxed at the plate, and is back to hitting to the opposite field, which is, as manager John Farrell has repeatedly said this season when it wasn't happening, when you know Middlebrooks is locked in.

Below is Middlebrooks' spray chart (via Texas Leaguers) from since he was activated, and although it's just a week, it clearly shows him using the entire field, especially the opposite field.

Now look at his spray chart from the start of the season until he was sent down to Pawtucket and notice the lack of hits to the opposite field.

In over two months at the beginning of the season, Middlebrooks had nine hits to the opposite field, while in just over a week since his recall he has five -- clearly showing a change has been made. Middlebrooks' home run last Sunday night into the Red Sox bullpen at Fenway Park was a perfect example of how he's at his best when driving the ball to right-center field as he went with the pitch and the swing almost seemed effortless. 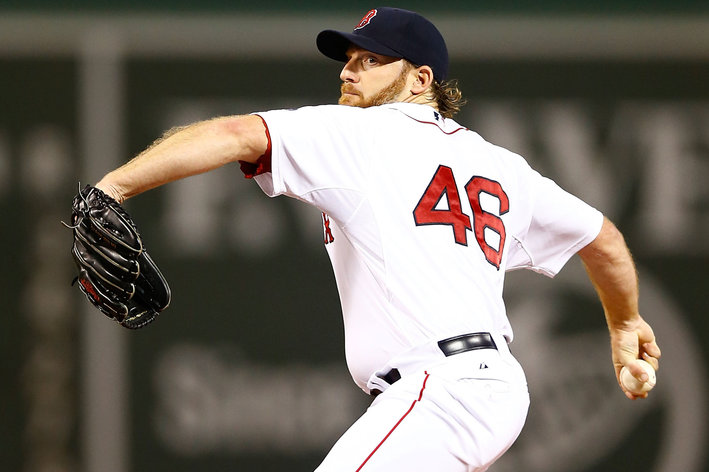 After the Red Sox traded Jose Iglesias to the Tigers at the trade deadline, it basically said the team was committed to Will Middlebrooks at third. Although Xander Bogaerts has played some third base, he's naturally a shortstop and has the most value there. If he performs like he has in the minors in the majors this year it's likely he is the shortstop in 2014, leaving third base to Middlebrooks.

Forget the future for a moment, though: the time is now for Middlebrooks. The Red Sox are in the heat of a pennant race, and something they've lacked is a powerful right-handed bat in their lineup, especially with Mike Napoli's slump and now absence with a left foot injury. Opposing left-handed pitchers have dominated the Sox of late, but if Middlebrooks can continue to swing a hot bat the rest of the way, he could help put an end to that.

When a player who started the first two months of the season gets sent down to the minors for two months within the same year, you'd never expect him to come back and have a chance to make an impact. Middlebrooks has been given an opportunity to do just that, though, and with the way he's swinging the bat, he's taking full advantage by playing a predominant role in highly contested AL East race.