Share All sharing options for: Cody Ross claims Red Sox 'lied to my face' in negotiations

Cody Ross left as a free agent to sign with the Arizona Diamondbacks this past off-season, in part because the Red Sox and Ross could never come to an agreement on a deal. He wanted three years, they wanted to offer him two, and since there was no middle to meet in, both sides went in opposite directions. Apparently, this offended Ross, who on WEEI on Friday said that Red Sox GM Ben Cherington "lied to my face" about their plans for long-term deals.

"They told me that they didn't want to sign guys to long-term deals, and then they gave [Shane] Victorino a three-year deal, and then [Mike] Napoli a three-year deal or four-year deal, whatever it was [later shortened to a one-year deal after health issues popped up]. So, basically they lied to my face. At that point, I kind of got a bad taste in my mouth and wanted to move on, and that was it.

So... we've got some things to unpack here. I like Cody Ross well enough, but here goes.

For one, three years isn't long-term given the kinds of contracts that are handed out these days, especially not for players with the resumes of Shane Victorino and Mike Napoli. Hell, Ross played with a few dudes who had actual long-term deals -- Adrian Gonzalez and Carl Crawford -- and neither of them were on the roster when the season ended.

Cody Ross was one year removed from signing a make-good, single-season, low-money, incentive-laden deal with the Red Sox, and was as good as he was entirely because of where he was, not because Cody Ross was the same caliber of player as the two he compares himself to above. Boston didn't want to lock him up for three years when they could get a better defensive player with comparable offense for the same length of time, was the same age, and wasn't part of the messy 2012 clubhouse that the Sox got a head start on dismantling back in August.

Koji Uehara's 2013 season has been a blast 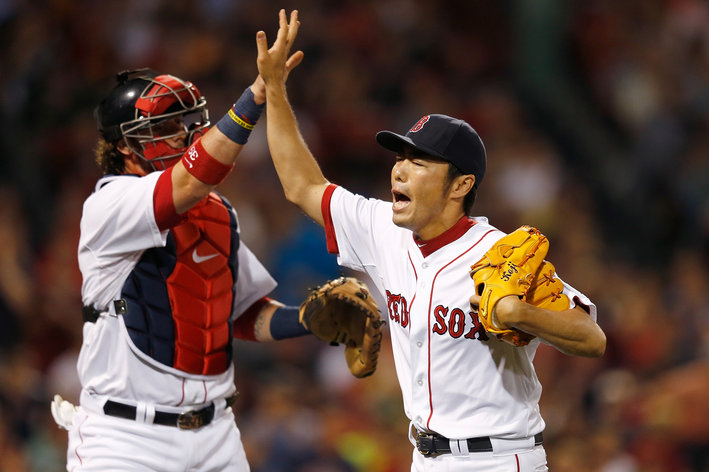 The 2013 Red Sox have been one of the most fun teams the franchise has had in years, and Koji Uehara has been a big part of that, both on the field and off it.

As for the Napoli comparison: Napoli owned a 133 OPS+ from 2010 through 2012 before coming to the Red Sox, whereas Ross was at 105, topping out at 114. Not even in the same ballpark -- of course you offer Mike Napoli three years if that's what it takes to get him. You don't necessarily have to do that with Ross, who had significant home/road and lefty/righty splits. The Sox signed Jonny Gomes to fill the role Ross could have -- again, this is why they wanted Ross for two years, and not three, because he was a part-time guy with severe splits -- for less money and fewer years than Ross would have received.

Honestly, I'm not sure who should be the most offended here: Boston's front office, or one or both of Napoli and Victorino. Ross has his high points, but come on: he's inconsistent and highly reliant on context, and that's why the Sox preferred to commit more to better, more consistent players, not because they were trying to low ball Ross into signing a below-market deal.