Not quite live-blogging Thursday's come-from-behind ninth

Because wins are fun and wins like last night's are funner, let's relive it all, eh?

Share All sharing options for: Not quite live-blogging Thursday's come-from-behind ninth

There are many, many games in a baseball season. It has been said that even the best teams lose a third of them, and that is mathematically true. It's also regular true! That means even good teams lose. A lot. The Red Sox are, to the surprise of many, a good team, and even so they manage to lose a lot. Last night was definitely shaping up to be one of those losses.

The Red Sox were coming off a win, but one of the 15-inning variety. The Wednesday game began a few minutes after seven o'clock and ended roughly tomorrow. It was long. The team was tired. I was tired. You were tired. We were tired and we didn't do anything beyond lift our beers and occasionally swear in the general direction of the television, or possibly the beers. 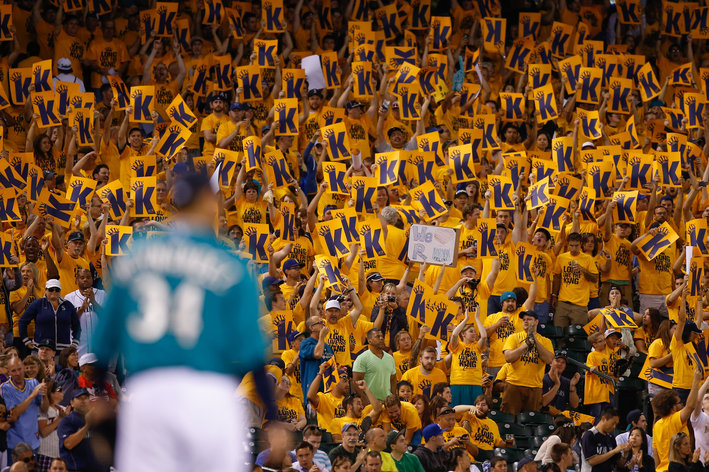 Even though she teased Dustin Pedroia recently.

So the Red Sox were tired, but more importantly, they were facing Felix Hernandez. Felix is the pitcher who personally convinced the Baseball Writers Association of America that pitcher wins were a stupid stat. He did so by pitching so brilliantly for a wretched team that even the BBWAA (Yes, "Base Ball") were forced to acknowledge his genius and present him with the Cy Young Award. That was the Red Sox reward after 15 bruising innings.

At the time I said I'd be happy if the Red Sox got a hit. Turns out they did a bit better than that, as you no doubt know. So this story has been written, but it occurs to me that these games are the reason we watch baseball each summer. Games like last night's are why we go to the park, why we listen in the car on the way to the grocery store, why we outfit our toddlers in "Green Monstah" gear. They are why we watch. Exultation when least expected. There are precious few places in life to find that. So with that in mind, let's relive it, eh? Yeah. Let's do that.

We'll start with the ninth inning because who cares about the stuff before that. Boston entered the bottom of the ninth down 7-2. The Mariners went to their closer anyway, Tom Wilhelmsen. Let's cue the action!

Man, I love Daniel Nava. Lots of guys would come up hacking in the ninth inning of a 7-2 game. They'd figure they're up five runs, the pitcher is gonna throw strikes, it's stat padding time! Not Nava. Not that he wasn't ready for a strike, but he was prepared to hand the rope over to Wilhelmsen to hang himself with if asked. He was asked. The first pitch missed outside, the next one way inside. The NESN guys followed the script by introducing Wilhelmsen, but then quickly veered away from the game action to reveal the answer to the twitter poll which was 'which form of illegal drug do you prefer to stow away in your person when crossing an international boarder?'*

*Note: it may have been a different question who cares.

Ball three high, ball four. As Nava trotted to first, NESN threw up what I assume was targeted for the ninth inning of a 7-2 loss, an ad for Advil. Before we move on, it's appropriate to credit Nava. He has cost the Red Sox dearly on the bases recently but this time his game smarts paid off. Some plate patience was all it took to light the match.

Lavarnway, because he's Ryan Lavarnway, fell down in the count. It was, at one point, 1-2. The NESN guys were still talking about the poll, which was, I believe, your favorite ways to cook goat meat. (I voted for boiling!) Lavarnway took ball two, then smacked one up the middle right past Wilhelmsen's groin for the first hit of the inning.

I don't know who Batter 3 is because NESN hasn't told me and the count is now 2-1. Okay, I looked it up. It's Brock Holt. Incidentally, that third pitch of Holt's at-bat is the first point in the inning where maybe, a glimmer of hope appeared. For the first time that inning the fans made noise following Wilhemsen's missed third pitch. On the fourth pitch Holt lined a Wilhelmsen meatball down the left field line scoring Nava and bringing Lavarnway around to third. Never count out the mystery guy! 7-3, Mariners.

At this point weirdness intervenes. The Mariners manager is Eric Wedge. But Wedge recently had a stroke and has wisely taken time off to recover. In his stead is the aforementioned Robby Thompson. Thompson rightly decided that four batters was enough for Tom Wilhelmsen. It could be argued that three batters was also enough, but we'll leave that to others. In any case, Thompson came out to make a pitching change and, with two opposite side relievers in the bullpen, lifted and pointed with his left arm. Except he wanted the right-handed guy. He quickly realized his mistake and tried to switch, but apparently the first arm you point with or to is it, so the umpires said no no you can't do that and he said what and they said yup can't do that and now Shane Victorino (who hits better from the right side) is facing the left-handed pitching Oliver Perez batting right-handed. Rookies, right? 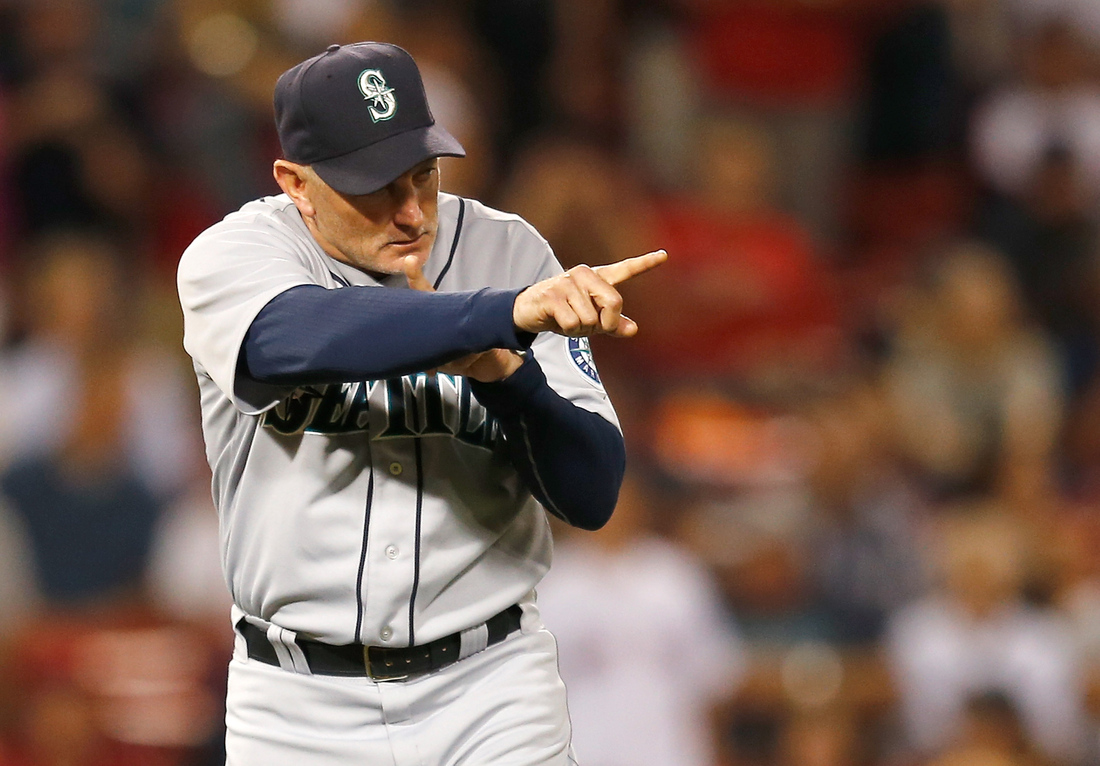 It took two pitches before Victorino grounded a ball through the right side. That scored Lavarnway and Holt and sent Ellsbury to second. First and second, no outs, 7-5, Mariners.

Now the crowd is, to put it gently, freaking the heck out. It's wonderful. Pedroia takes ball one and then, because he's Dustin Pedroia and he doesn't put up with crap like this, lined a single to left. Ellsbury trotted around third and, though it was close, beat the throw. It turned out that third base coach man put up the stop sign then changed his mind and sent Ellsbury. This caused Ellsbury to slow down rounding third. He scored anyway so whatever. 7-6, Mariners.

Ortiz struck out swinging. Who wants to relive that? Right. Moving on.

This time when Thompson comes out to change pitchers, he touches his arm carefully and deliberately. Because it was his arm's fault that he called for the wrong pitcher before. Stupid arm! This time his arm succeeds in bringing in the pitcher his brain was hoping for, Yoervis Medina. Gomes takes two strikes down the pipe. The crowd groans as momentum shifts. Then ball one outside and ball two inside even the count. Gomes fouls one off. Then, as a "Let's go, Jonny!" chant is heard, Gomes takes a pitch on the outside corner for strike three. 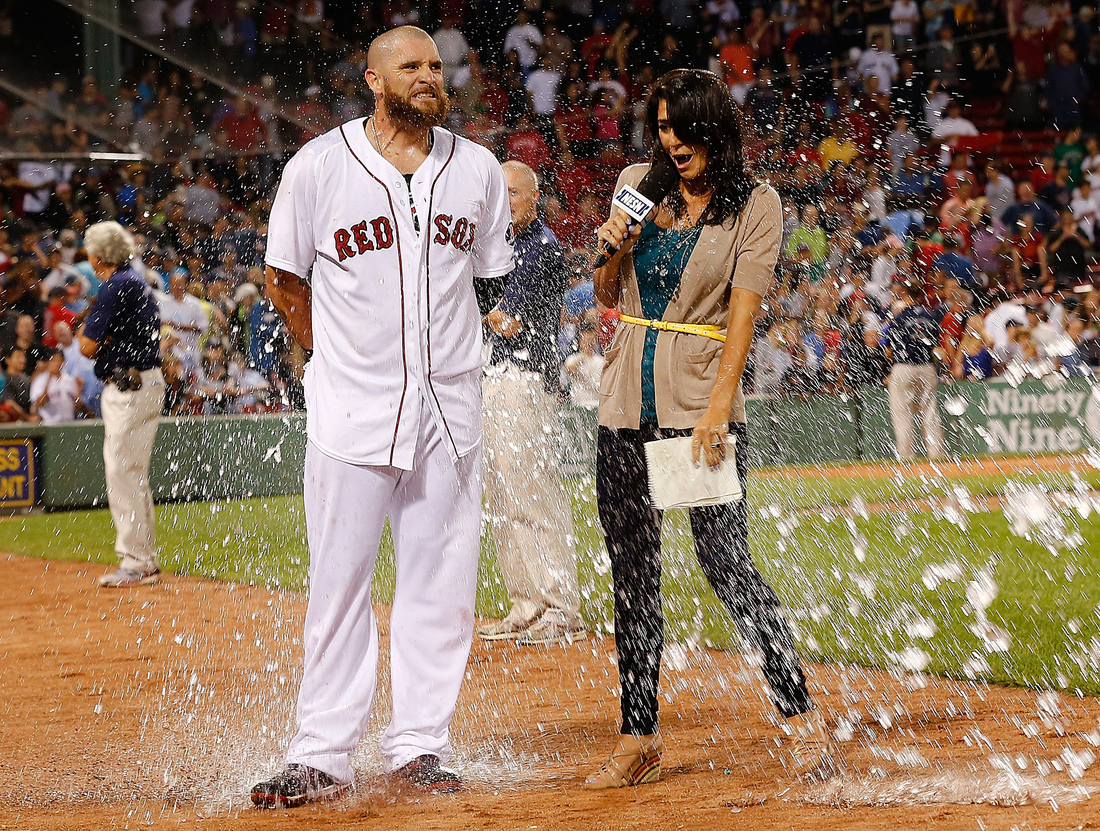 Except it's called ball three. Then, following the cardinal rules of sport wherein when an official misses a call and gives a team another chance that team will ALWAYS cash it in*, Gomes lines a shot up the middle for a single. Victorino scores easily. NESN flashes to Mariners GM Jack Zduriencik. He looks the opposite of pleased. Or maybe he was thinking of the differences between his left and right arms. 7-7, tied game.

*Editor's Note: The Mariners' Justin Smoak drove in a run after a similar no-call situation earlier in this game, so really, Gomes' luck here on that pitch was simply bringing the universe back into balance.

It is immediately noted, as well it should be, that Drew was the "hero" of Wednesday night's 15 inning fiasco/game. Drew punctuates that statement as soon as it is uttered by swinging over the top of a change up. Drew lines the next one foul down the line. The swing looked very similar to that which he used to win the 15 inning game. Drew was down 0-2 at that point, but the next four pitches were outside, inside, outside, inside. Drew walked. That loaded the bases. It was the fourth walk of the inning and it meant Daniel Nava was up. Again.

Man, I love Daniel Nava. Have I mentioned that? I feel like I have, yet I don't mind mentioning it again. Man, I love Daniel Nava. I love Nava's story, that he was cut from his college team, cut from an independent league team, bought by the Red Sox from that team (after winning MVP of the league!) for one dollar (one!), and fought his way up from the deep minors to start in the same spot as Teddy Ballgame, Yaz, Dewey, Rice, and Manny. I love that about him. But maybe I love his swing more. It's almost a golf swing from the left side in that it starts high, goes low, and finishes high again. He almost lifts the ball up and throws it with the bat head. The swing is smooth to the point where you can almost see the cartoon lines indicating speed following inches from the bat. The follow through looks like something out of the 1930s.

And oh yeah, Nava hit the first pitch he saw to the base of the center field wall, about 400 feet away. Any other time it would have been a double, maybe a triple, but in this case, it goes in the books as a single. A game winning single. I think he'd take it.

So there you have it. Down 7-2 in the ninth inning facing the opposing team's closer, having spent the majority of the day battling one of the best pitchers on the planet, and coming off a 15-inning game the night/morning before, the Red Sox fought back to win a game they had no business winning and sweep a series in the process, putting them a full game up over the Rays in the AL East.

Who knows how this season will finish out, what the twists and turns will be before all is settled. It could be special, it could be a bridge season. There's nothing wrong with winning a World Series, but the beauty of the baseball season comes in games like last night's. Don't tell me you didn't have a jump in your step after watching that, or an indomitable grin after finding out the result. That was me. I turned the game off after Dempster gave up the grand slam. It was over. The Sox were done for the night and so was I. Except, as it turned out, neither of us were. I called up the score on my phone hours later. "They WON!" I yelled. My wife came running. "What?" she said. I grinned. I couldn't help it.