There's not a lot to say, but the Red Sox are at least acknowledging Abreu is an option.

Jose Dariel Abreu could be the top first baseman on the free agent market this off-season, following his recent defection from Cuba. The Red Sox could very well be interested in him, but as of yet, general manager Ben Cherington isn't willing to divulge many details of Abreu or their plans for him. Cherington appeared on WEEI's Dennis and Callahan show, where he was asked about the Cuban slugger.

I can't give you much of a scouting report. We just don't know him well enough yet. And of course until he's gone through the process of getting cleared and all that, there's really not much to say. As with any player that comes out of Cuba and has a chance to help us, we'll certainly do the work that we need to do. In a few months, I may be able to answer that question better. But the numbers in Cuba certainly were impressive.

Teams have seen what Abreu can do in international tournaments and the like, but as with any Cuban players, access to them is limited prior to their defection and the establishment of residency elsewhere. The Red Sox have seen enough that they're intrigued, but not enough to openly discuss him, and even if they did have the information they wanted, this is Ben Cherington's Red Sox we're talking about: they tend to keep things under wraps until they're official, anyway. Cherington could hand Abreu a stack of money in front of cameras and the Sox wouldn't comment on the situation until a press conference was underway.

Jose Dariel Abreu defects, should the Red Sox be interested? 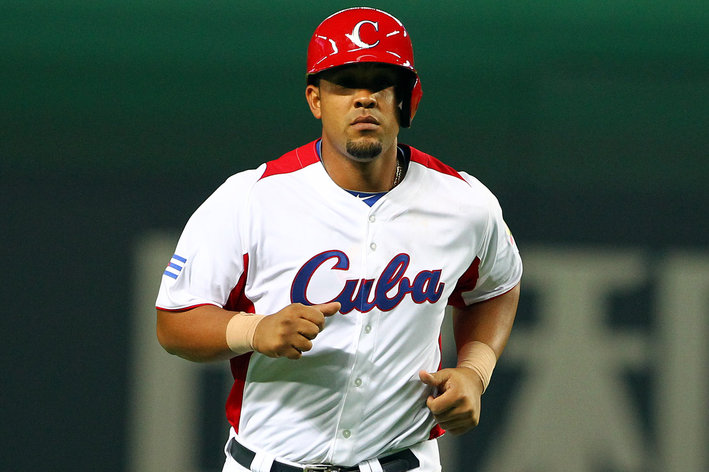 Jose Dariel Abreu has defected from Cuba. Is he a fit for the Red Sox?

If Abreu is cleared by the United States and Major League Baseball and becomes a free agent this winter, expect him to be on Boston's radar, as Mike Napoli is a free agent who has been fine enough, but not stellar in his first Boston campaign, and will be 32 years old in 2014.

Abreu would be expensive, of course, but we already know Boston's attitude towards pricey international free agents, thanks to Larry Lucchino's comments regarding Miguel Alfredo Gonzalez. All they cost is money -- not prospects, not draft picks -- and that makes them a different kind of risk, perhaps a more acceptable one, even with hefty price tags attached.

Given that the first base market isn't going to get any better than it is in the future -- there's a reason the Red Sox were able to dump Josh Beckett and Carl Crawford on the Dodgers and get prospects back, and that reason is first baseman Adrian Gonzalez's reasonable long-term deal -- Abreu would make a lot of sense. Many other clubs are bound to feel the same way, though, so hold off on ordering that custom Sox jersey for now.