The Red Sox and the September AL East Cage Match

September will decide the the AL East champion with an all-out, intra-divisional cage match. Are you ready for it?

Share All sharing options for: The Red Sox and the September AL East Cage Match

Cage matches? Yeah, they work. How could they not work? If they didn't work, everybody would still be in the cage.

I can't help it. I try not to look, but I just can't stop myself. Way back in March, I hung the Red Sox printable schedule up on the wall just to the left of my desk. Now, I find myself glancing over at it, eyeing the bold san-serif characters spelling out September. Whenever it happens, I feel my stomach clench.

I saw it the day I hung that schedule up. You can't help but notice it. Back in March, however, it was just a curiosity. I remember thinking to myself, "wow, they have a lot of divisional matchups at the end of the season. How interesting." Now, that ‘wow' is being replaced by an ever-lengthening series of expletives and the rest of the thought is something closer to "what sick and twisted monster put together the schedule for this God-forsaken month?!"

In September, the Red Sox have seven games against the Yankees, six against the Orioles, three against the Rays and three against the Blue Jays. That's 19 games in the division in the final month. They play 13 straight against teams in the AL East starting on the fifth. The final series of the regular season has them playing the Orioles in Baltimore, which I think may have happened before in the not-so-distant past, but any recollection I might have of such an event is buried deep in a murky pool of alcohol and sadness. In other words, "what sick and twisted monster put together the schedule for this God-forsaken month?!"

The month starts at home with the final game of a three-game series against the White Sox, which is fortunate enough given their lack of things to play for, but it then moves on to a three-game series against the Tigers, who are almost certainly playoff-bound and who could easily be fighting for the division lead at that point if they continue to falter over the next two weeks. The Tigers have lost 4 of their last six following a 12-game winning streak and they will meet both the surging Royals and the floundering Indians ahead of that series in Boston. The only other out-of-division games in the month will be two games against the Rockies. In Colorado. Right before Boston travels to Baltimore for the final series of the season. In other words, "what sick and twisted monster put together the schedule for this God-forsaken month?!"

The Red Sox are in first place and they have the best record in the American League right now, but for some reason, I can't seem to take any comfort in that. They are 29-21 against their division rivals, which helps some. Adjusting for the number of games and their winning percentages against each team so far this season, those 19 divisional games would project to produce a record of approximately 11-8. I like those numbers. They aren't outlandish, but they also don't make me scan the room for ways to drown my sorrow. They are peaceful and comforting, like the smell of jasmine and some soft classical guitar music.

Which prospects could the Red Sox call up in September? 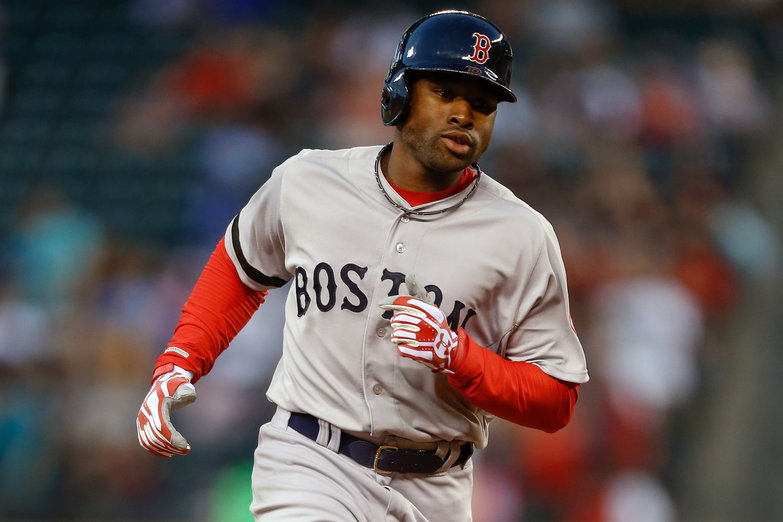 Figuring out the faces we'll likely be seeing when rosters expand in a few weeks.

They are also probably meaningless. Three of the other four AL East teams are over .500 and both the Orioles and the Yankees made moves to improve during the last month. As I discussed prior to the trade deadline, both the Yankees and the Rays feature two strong lefties at the top of their rotations and hitting lefties has been a weakness for the Red Sox. The Rays have cooled off so far in August after being the hottest team in July, but the rest of the AL East--including the Red Sox--are just treading water. The Orioles and the Yankees are 6-6 this month and the Red Sox have gone just 7-6 despite facing relatively benign opponents like the Astros, Royals and Blue Jays. The Orioles and Yankees look out of the division race right now, but they are both still in striking distance of the second wild card and with so many games against the division leading Red Sox still ahead, they have a chance to change the dynamic in a single series. All of which basically says, anything could happen in these last six weeks with the AL East teams locked up in this inter-division Royal Rumble over the last four weeks.

As it turns out, this wild scheduling doesn't just affect the Red Sox. All of the AL East hopefuls have to play the majority of their September games against division rivals. Boston doesn't even have it as bad as the Orioles. Baltimore plays 21 of 26 games in September against teams in the AL East. The Yankees play 17 games against AL East opponents and the Rays play 16. If the Blue Jays had lived up to their pre-season billing as contenders, they still would have been put to the test in the final month with 15 division games. These games will be a high-leverage as possible, with wins and loses affecting the standings as dramatically as possible.

When you look it that way, that sick and twisted monster begins to look like a true evil genius. Sure, September going to be bad for my circadian rhythms and it could end up taking a toll on my liver as well, but it is probably going to be some great baseball. The AL East is once again the best division in baseball, with four of five teams over .500 and this season, it is also right there with the NL central as the most competitive division in the game. Ending the season this way guarantees plenty of pennant-race drama, and even though my rooting interests might make that painful to live through, I'm all for it. There is no easy path for AL East teams in the final month and whoever takes the division crown will have to earn it against their biggest rivals.