A healthy Stephen Drew having stellar second half for Red Sox

After dealing with two injuries earlier this year, a now-healthy Stephen Drew is having a very productive second half

Share All sharing options for: A healthy Stephen Drew having stellar second half for Red Sox

Stephen Drew may not have had the full backing of Red Sox fans even before he stepped onto the field at Fenway Park for the first time. It's territory that comes with the last name. Drew, after all, is the brother of former Red Sox outfielder J.D. Drew, who was heavily criticized by a significant portion of the fanbase for the number of games he missed due to injury, as well as a perceived lack of investment in the team.

Unfortunately for Drew--Steven that is--a concussion in spring training and, more recently, a hamstring injury that kept him out for the first half of July have done little to convince his early detractors of Stephen's value. For all that fans spent months crowing about his early production, however, Stephen Drew has been one of the better shortstops in the American League this year.

Drew had to miss the first full week of the regular season because of lingering concussion symptoms. With the lack of a full spring training, Drew struggled out of the gates posting a .154/.267/.250 line in 52 at-bats spanning 16 games in April. It's easy to imagine his struggles to open the year had something to do with not getting many at-bats in spring, as few players can step right into the regular season without the help of spring training to get timing down and get comfortable at the plate.

Do the Red Sox need an ace to contend? 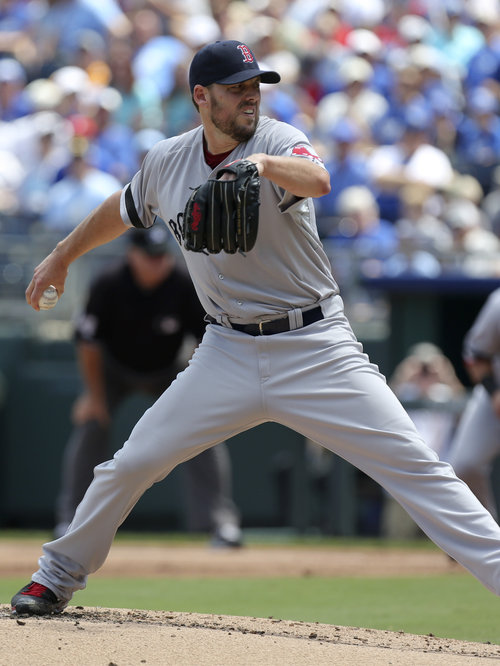 Is the lack of an ace a legitimate concern for one of baseball's best teams?

Once Drew got settled in he began to turn things around rather quickly. In his first eight games in May, Drew hit .400/.424/.633 with two home runs and eight RBI. During the rest of May and much of June, Drew played through an injured right hamstring, which led him to play a bit streaky in June. Overall, though, the shortstop hit .267/.302/.489 in the month; that's a perfectly reasonable figure, particularly given his position. But even while he was producing, Drew was still hampered by the injury, and with the Red Sox in need of a pitcher for their pre-All-Star break West Coast trip, Drew was sent to the disabled list on July 5, retroactive to June 29.

The shortstop was shut down for a few weeks, and then began to rehab during the All-Star break, ultimately returning July 20 in the second game after the break, missing 16 games in total. Even though Drew played a few rehab games with Portland, it took him some time to get his timing back, as it did to begin the year. In his first five games off the disabled list, Drew went just 1-for-15 (.066) with five strikeouts.

Since he's gotten his timing back, however, he’s posted one of the top hitting streaks of the season for the Red Sox. Before being robbed of extra bases twice in Toronto, Drew had a 12-game hitting streak, the longest he's had for three years. Over the course of the streak Drew hit .422/.500/.622 with a pair of homers and nine runs batted in. That also happens to be the longest hitting streak for a Red Sox shortstop since Alex Gonzalez’s 12-gamer in August of 2009.

Drew has done the majority of his damage during the streak by pulling the ball with authority to right field showed by his hitting chart (via Texas Leaguers) since coming off the disabled list July 20.

Not only is Drew’s performance since the All-Star break impressive for him, he’s putting himself among the best hitters in the American League since the break. Before Tuesday night's game, Drew was hitting .324 with eight extra-base hits, including four home runs and 15 RBIs since the break. His .324 average puts him 12th among players with a minimum of 75 at-bats and even more impressive is his .420 OBP, the fifth best in AL. 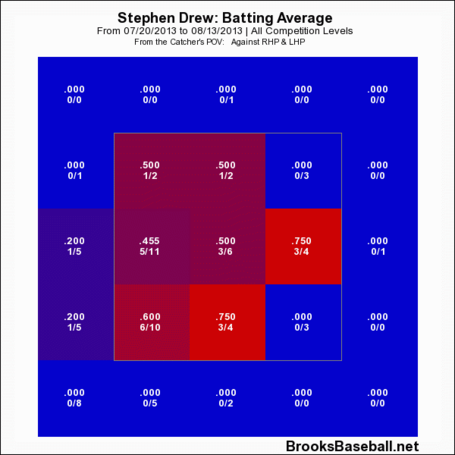 With all the criticism Drew has received this season, it has not been deserved as going into Tuesday his overall line for the season read .255/.340/.441. His average is eighth amongst AL shortstops with a minimum of 175 at-bats, to go along with the fourth-best OBP and third-best SLG. Drew has quietly performed very well defensively posting the third-best fielding percentage in all of baseball among shortstops at .989, by only making four errors all season, with UZR also giving him a positive grade more-or-less in line with his career numbers since his defensive turnaround in 2009.

Contrary to the general perception, Drew is having a productive season, which could be even better without the two injuries and the the time it’s taken for him to get back in the flow of games afterwards. With Drew’s contract up following the season and Xander Boagerts next in line, its entirely possible Drew will not return to the team next year. But, as the Red Sox march towards the playoffs, he will likely play a major role in the Sox’ success. Going on his track record this season, if he stays healthy, he should make a major impact down the stretch.