Do the Red Sox need an ace to contend?

The Red Sox are enjoying more success than anyone expected, but people are still looking for reasons they will fail. Is the lack of a true ace a legitimate concern?

Share All sharing options for: Do the Red Sox need an ace to contend?

The past two seasons have had a lasting effect on Red Sox fans that's impossible to deny. It's perfectly reasonable, too. After a decade of winning that included two World Series championships, it was easy to feel good about the franchise, even after a couple missed postseasons in a row. That all went out the door after the epic collapse in September 2011, followed by the disaster that was the entire 2012 season. Fans lost all connection with the team, and some even developed a mild hatred for them.

This effect is rearing its head as of late, with Boston currently enjoying a surprisingly successful season, up four games over Tampa Bay in the AL East as of this morning. Even still, people all over Boston are looking for reasons to doubt the team. Listening to the radio and scouring the internet, I have found that one of the most common theories being thrown around is that "teams need an ace to contend, and this team doesn't have that." That line of thought isn't specific to Boston, though. It's a widely held belief around baseball. The thing is, are we even sure it's true? And are we sure the Red Sox don't have that "ace" needed to be a championship contender?

To look into this issue, I went back over the last 10 World Series and checked out the "aces" of the pitching staffs for both teams in the final series. I chose 10 years because the twenty team sample it gave me was large enough to take some information from, while not going too far back in history to delve into different eras of baseball. First, I looked up the leader for each participating team in ERA- for the season. This adjusts a pitcher's ERA for park factors and compares it to the league-average, with an ERA- below 100 being above average. Of the twenty teams that made the World Series, nine of them, or 45 percent, had a pitcher in the top-10 in MLB in ERA-, while 12, or 60 percent, had someone in the top-15. While it seems to certainly help to have an arm who is elite in terms of run prevention, it's certainly not necessary, with six teams having their leader outside of the top-20 in ERA-. The worst ranking was held by Kyle Lohse, who led the rotation for the 2011 champion St. Louis Cardinals after finishing the season with the 42nd best ERA- in baseball.

When we're talking about aces, though, some may not be satisfied by just using run prevention, as there is a decent amount of luck involved with this. Because of this, I also looked at the same sample, this using FIP-, which carries the same properties as ERA-, except substituting in FIP. In this case, there were just eight teams (40 percent) with a top-10 pitcher in FIP-, and 12 teams with a top-15 arm. While the worst pitcher wasn't quite as low in the rankings as Lohse was in 2011, there were seven pennant-winning teams who's best pitcher in FIP- finished outside the top-20 that year. The worst ranking in this stat was held by James Shields, who led the Rays' staff when they made their run to the World Series in 2008. Shields had the 36th best FIP- in the league that year.

From the data above, it's clear that it's not absolutely necessary, and teams have had plenty of success without having a truly elite pitcher on their staff. The 2011 Cardinals did their damage primarily with their top-5 offense. That season, both their rotation and their bullpen were below-average, putting to death the myth that only pitching can win championships. The 2008 Rays, on the other hand, won with a middle-of-the-pack offense that was elevated by a deep rotation, a very good bullpen, and the best defense in baseball. 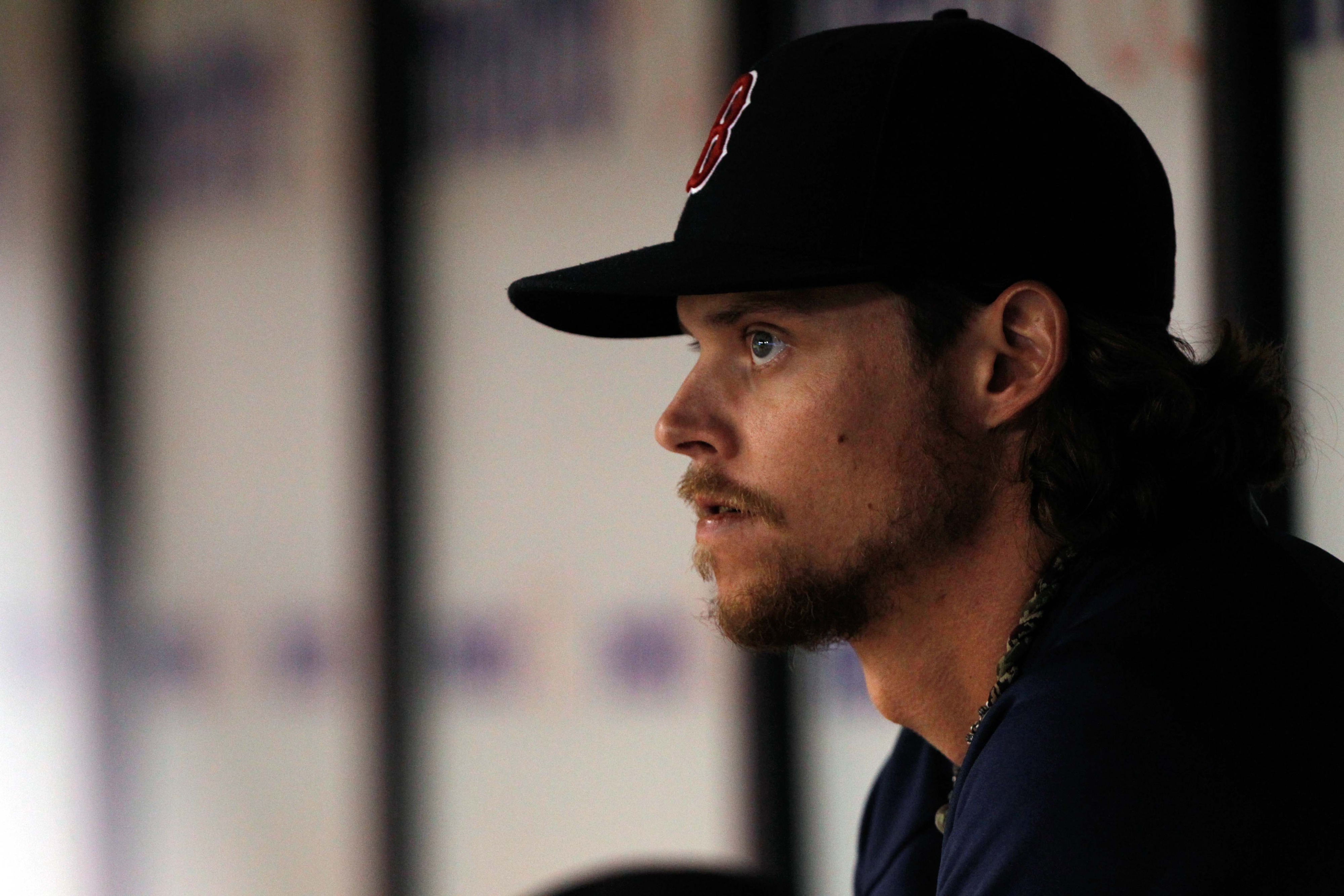 Luckily for the Red Sox, these are models they can follow very well. Right now, the offense has scored the most runs in baseball, just a shade above Detroit's. For all of the complaints about the lineup as of late, it is still the best in the game at scoring runs. Additionally, their pitching staff is still a top-10 staff, employing the strategy of having multiple good arms instead of relying on one great one. They also have a good defense -- led by players like Jacoby Ellsbury, Shane Victorino and Dustin Pedroia -- and a bullpen with the potential for greatness, especially in the back end with Koji Uehara and Junichi Tazawa, as well as potential in Brandon Workman and Drake Britton. 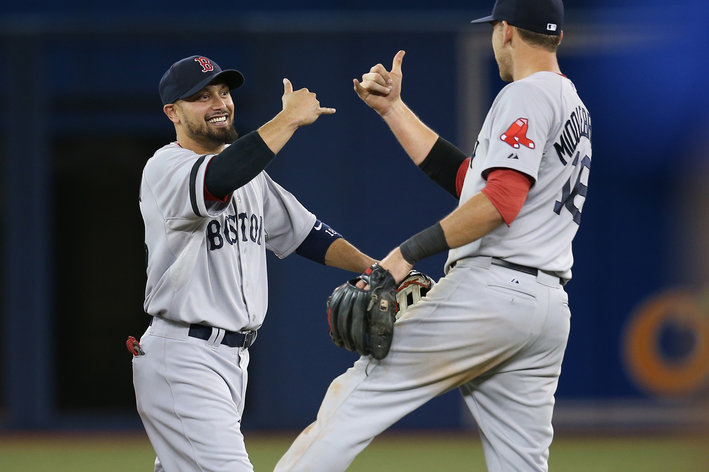 He didn't do it alone, but Victorino's two huge moments helped the Red Sox to a win over the Blue Jays.

Looking for an ace on this staff may not be so easy on the leaderboards. By ERA-, the leader has been John Lackey, one of the most surprising players in the game this year. His 79 ERA- currently ranks 22nd in baseball, just outside of the top-20. It's not ideal, but plenty of teams have succeeded with this type of pitcher leading the way. Looking at FIP-, Felix Doubront and his strikeouts actually lead the way, as his 82 mark ranks 19th on the MLB leaderboards. Obviously though, these aren't the two front-runners if things go according to plan. Clay Buchholz should be back in the rotation by the time the playoffs roll around, and the team is hoping he can pick up where he left off before he was hurt. If he can even come close to those levels -- which would put him in 1st in ERA- and tied for 2nd in FIP- if he had enough innings to qualify -- then the Red Sox will have that ace that everyone is searching for. It's far from a given since he's missed so much time, but we've all seen that he's one of the best pitchers in the game when he's healthy, and has had plenty of top-of-the-rotation success dating back to May of 2012 as well.

The old myth of needing an ace to win in this league is a popular one all across the game. The reasons are obvious, since it clearly helps to have an elite arm leading the way to a championship. However, plenty of teams have made it to the World Series without a true "ace," both because they were well-rounded baseball teams and because the MLB playoffs are a crapshoot. Looking at recent history proves that the Red Sox definitely have what it takes to call themselves contenders, even if Clay Buchholz doesn't return to form. It's easy to be cynical about the team after the last two seasons, and there's enough time left in the season where anything can happen. If they do fall short of the ultimate goal, though, it will probably be for more reasons than simply lacking an ace.