How have the Red Sox' free agent signings impacted 2013?

Most of us acknowledge last year's free agent additions have been integral to the Red Sox success this season. But, would the Red Sox still be in first place had they had stood pat this past off-season?

Share All sharing options for: How have the Red Sox' free agent signings impacted 2013?

The Red Sox are 71-49. Now is a great time to look at their record because the first digit in the win column and the first digit in the loss column are quite different from each other. Personally, I find this pleasing to the eye. Scroll over to the "Games Back" column and you'll see some more eye candy: one of those fabulous minus symbols, meaning they are zero games back, meaning they are, in fact, ahead.

It's always great to be in first place, but it's placed into sharp relief when we remember last season. A year ago on this date the Red Sox were 57-59. That's not horrible, though they were perhaps, if such a thing exists, a horrible 57-59. And they hadn't made The Nick Punto Trade yet. That would come just shy of two weeks from now. We all know what happened afterwards. The trade plus injuries meant the last month-plus of the season was, in essence, the PawSox at Red Sox prices. They ended up 69-93, 26 games behind the Yankees. For those who tuned in hoping to see a playoff-caliber team, it was hard to watch.

I bring all that up because many think the 2013 Red Sox had their genesis at that time, with that trade. The Punto Deal freed up roster spots and budget room, both of which were required for the buying spree that would be the 2012-13 off-season. That off-season brought in, among others, Koji Uehara, Shane Victorino, and Stephen Drew. Some, maybe including me, have spoken of that deal and, more germane to this article, the moves that followed it as the moves that made the successes of 2013 possible.

Now, I'm not so sure that's correct. I'm not saying it's wrong either. I guess I'm saying let's take a look. So let's take a look. Last off-season the Red Sox gave out 17 years worth of contracts to free agents totaling $126.45 million (according to MLB Trade Rumors). That includes the following:

There are also four minor-league deals included in that total as well as David Ortiz's two year, $26 million contract, as Ortiz was technically a free agent. But if you drop the minor-league guys and realize Ortiz wasn't really going anywhere else, you're left with the seven above. Those seven totaled 12 contract years worth $100.7 million. That's a lot of money and years to give out in one off-season. 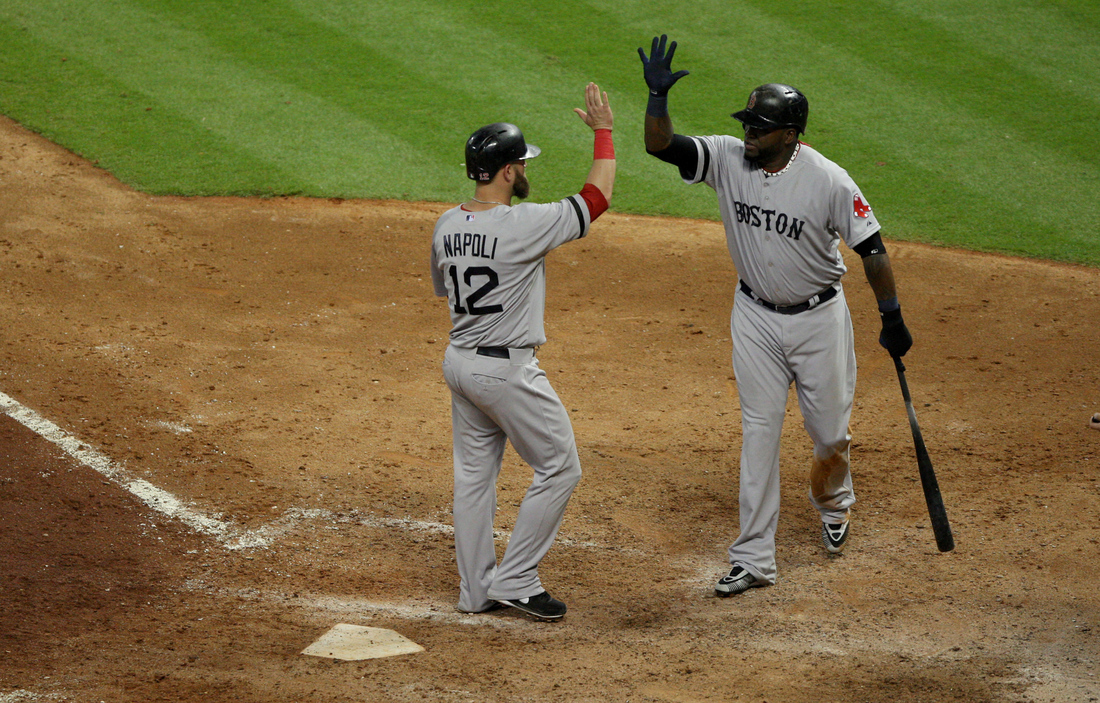 Just eyeballing the numbers looks pretty impressive. The three starting hitters and two back-ups, one who has only played 23 games owing to his role and a pair of concussions, have accounted for almost exactly what you'd have hoped for, roughly a third of the total value. As for the pitchers, Dempster has been barely above replacement level, so it's tough to heap praise on the front office for that one right now (though it isn't entirely fair to look at the deals with the benefit of hindsight), but Uehara has been so incredible that he's almost made up for it. According to Baseball Reference, Uehara has been the third most valuable pitcher on the Red Sox, edging out Felix Doubront. Baseball Prospectus has him as the fifth most valuable (with Doubront... first?) so intelligent minds can disagree on specifics, but the point is that Uehara has been incredible and has already paid for his contract for this season and next. Already.

Something else that strikes me is that the production is, for the most part, pretty well spread out. Everyone (mostly) has contributed roughly what they were expected to contribute. Victorino has been worth roughly four wins, Napoli two, Drew two, Gomes one, and Ross is kind of a sunk cost because of the injury (though the potential exists to change that, especially with 2014 on the menu). But going by the standard $5 million cost per win on the free agent market, each of those guys has paid for his salary this season. The one exception is Ryan Dempster who has been just a smidge above replacement level, though again, there is some time left to change that, as well as value in having him pitch rather than one of the Sox' not-quite-ready minor-league options.

Of course there are caveats. I'm using rWAR as a quick easy number, but, for hitters anyway, you have to buy into defensive numbers, and Baseball Reference (the makers of rWAR) likes Shane Victorino's defense. I also like Shane Victorino's defense, but although the numbers at FanGraphs and Baseball Prospectus show Victorino to be having a stellar season defensively, you may disagree. 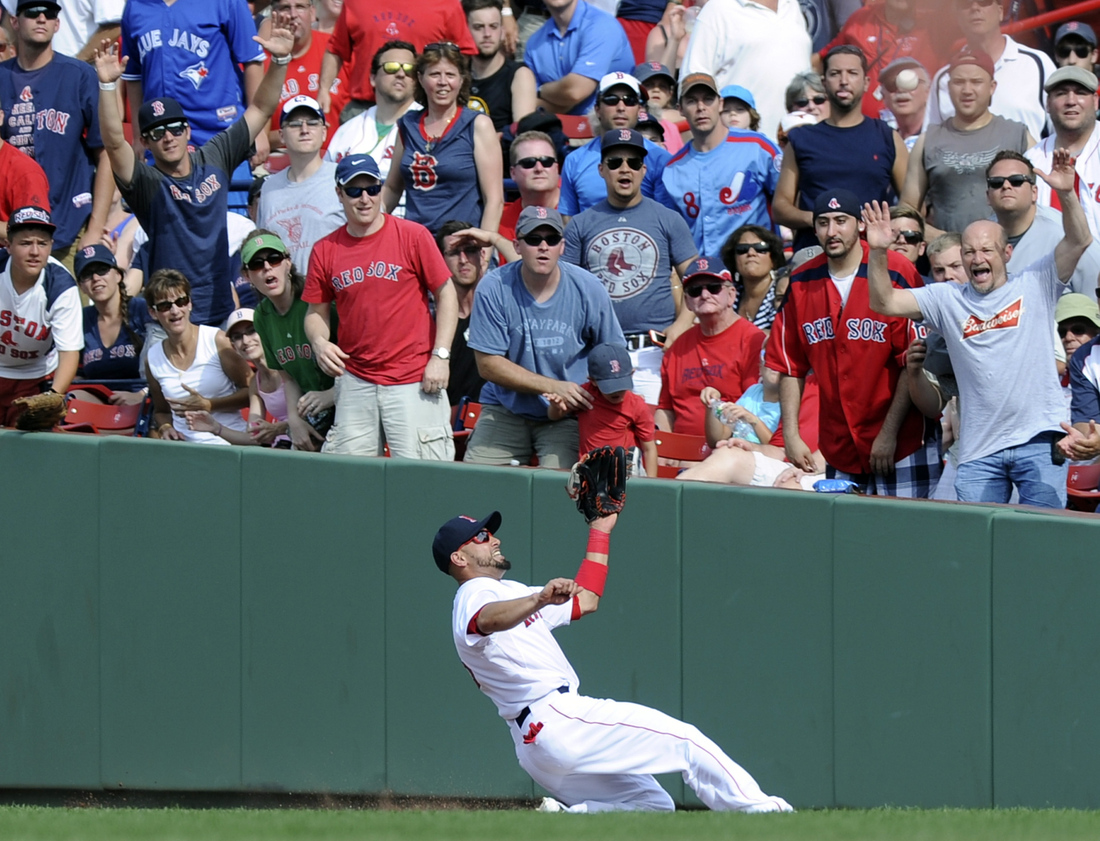 In any case, the numbers aren't really the whole point. The question is, how much better are the Red Sox now than they would have been had they made different choices, signed different free agents? Of course, that's very difficult to say. There are so many possible permutations, so many different directions the Red Sox could have gone this past off-season, that if I tried to provide an answer for each roster cul-de-sac, you'd be here all day if I ever did manage to finish this thing, which I wouldn't.

That said, I think you can say that they've done pretty well. Victorino has worked out exceptionally well so far, Drew has played well now that he's healthy and his presence has allowed them to trade Jose Iglesias and add Jake Peavy. Napoli's start to the season comprises most of his value but he's had periodic mini-hot streaks, and, to my eye at least, acquitted himself pretty well over at first base.

There is also the stuff the numbers can't capture. The change in clubhouse chemistry, the grit, the toughness, the Jeterian stick-to-it-iveness, the cumulative Ecksteinium of the new players and their overall affect on the clubhouse. Not being in the clubhouse I have no idea how this is really playing out, and frankly, you probably don't either. We can both speculate all we like, but if the Red Sox had signed a different player instead of Jonny Gomes, maybe they'd be in the exact same spot that they are now. Maybe they'd be better. Maybe they'd be worse. There's also the whole argument that clubhouse chemistry isn't particularly valuable, an argument I think works in the vast majority of situations with this season being a notable exception.

Koji Uehara's 2014 option will vest with one more game 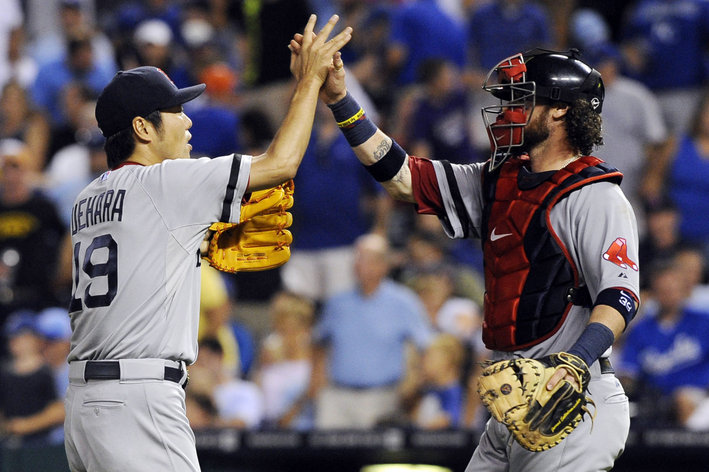 High fives for everyone for another year!

It's true there are other reasons for that winning. The guys who were here last season and weren't dealt off have all improved and mostly managed to stay healthy. That has been huge. You can have all the Shane Victorino's and Jonny Gomes's that you want, but if David Ortiz, John Lackey, and Dustin Pedroia aren't healthy than there isn't much left to do but wait for next season. But the free agents weren't signed to be the stars. They were signed to supplement the stars, and they've done that, and they've done it in almost all cases. It's a hit rate that is pretty striking. For free agents, that's not bad.

So in the end we're left with this: the free agents the Red Sox signed last off-season have been good if unspectacular, but the Red Sox wouldn't be where they are without them. Unless they'd have signed other better players, but then, that's sort of obvious, isn't it?