Jose Dariel Abreu defects, should the Red Sox be interested?

Jose Dariel Abreu has defected from Cuba. Is he a fit for the Red Sox?

Maybe it's because of the likes of Yoenis Cespedes and Yasiel Puig doing what they've done since defecting, but Abreu is about to enter the free agent market with about as much hype as can be mustered for a player who has never played in the major leagues. To say nothing of his quality as a player, it feels more like the madness surrounding Daisuke Matsuzaka than anything else.

So what's the attraction of Abreu? Simple: he's a 26-year-old with elite power who should play in the major leagues right away. In a league where pitchers have had the advantage over hitters for the last few years, finding someone who can knock out 30-plus homers a year is kind of a big deal. And at 26? That's the age teams never get to sign a player at. It's an age where a six or seven year contract doesn't come with an asterisk saying that half the deal is going to come with the player in decline.

But, of course, such a deal also comes with no guarantees. Abreu hasn't played in the majors. According to Ben Badler, scouts are split on whether or not his ability at the plate will translate to the major leagues. He's got a chance to be an All-Star, one of the best bats in the game. He's also got the chance to be a complete bust, and one that could cost better than $80 million. That's the nature of the game here.

For the Red Sox, the attraction would be obvious. Abreu has the ability to immediately fill the team's long-term void at first. No need to worry about how Garin Cecchini's bat will play there. No need to think about Mike Napoli's strikeouts getting worse in 2014. At least not so long as Abreu can play the part.

The question, then, becomes whether the Red Sox are a team that should be looking to take all-or-nothing risks on players like Abreu. Are they in a position where the risky home run swing is better than a solid double? And is the solid double even available to them in this market?

Miguel Alfredo Gonzalez back on the market? 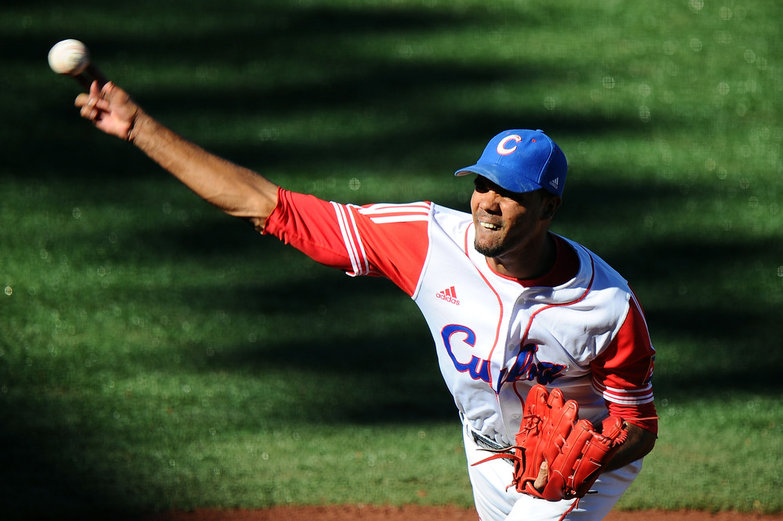 Abreu is not the only Cuban free agent of note.

For what it's worth, this definitely presents a rare opportunity. The Dodgers won't likely be in on him with Adrian Gonzalez signed long-term. It's not all that hard to imagine the Yankees signing him up and using him or Teixeira as a designated hitter, but they're trying to get under the CBT threshold next year before going on a spending spree, perhaps leaving one particularly vulnerable window. It's always possible that some surprise team enters the market, but right now it's looking like the Red Sox are, at the very least, on top of the food chain with a couple other organizations, not outclassed by any of the league's most obscene spenders.

Chances are we won't hear much more about this for another month or two. When we do, though, Abreu could be taking center stage in the free agent class of 2013-2014.