The Red Sox may have rejected a trade offer which would have sent Jackie Bradley Jr. to the Mets in exchange for reliever Bobby Parnell

The Red Sox need help. They need help in their bullpen. The Mets have bullpen arms to shop, given that they're not headed to the playoffs anytime soon.

Before you say it sounds like a match made in heaven, though, read this bit from the New York Daily News' Bill Madden:

Still, as one scout who's followed the Mets a lot this season told me: "I'm sure those clubs could really tempt the Mets on Parnell - the Red Sox with the outfielder, Jackie Bradley Jr., and one of their top pitching prospects like (Rubby) De La Rosa..."

Alright, so that's one scout showing why they're a scout, and not a GM. Any team that trades a top-25 prospect and a arm like De La Rosa (ranked #90 before performing well in the majors in 2011) deserves what's coming to them in the future.

And yet...if Mike Francesca is to be believed (and that is not a trivial if--it's worth noting that nobody else seems to have heard about this rejected proposal), this is at least akin to what the Mets are thinking. Francesca said today on his show on WFAN that the Mets went to the Red Sox to suggest a Bobby Parnell - Jackie Bradley Jr. swap.

They were, understandably, rejected.

Look, Bobby Parnell is a very good pitcher, and frankly kind of perfect for Fenway Park and the Red Sox. And with free agency not in his immediate future, the Mets can expect to get a reasonable return for their reliever if, indeed, they do decide to send him elsewhere. 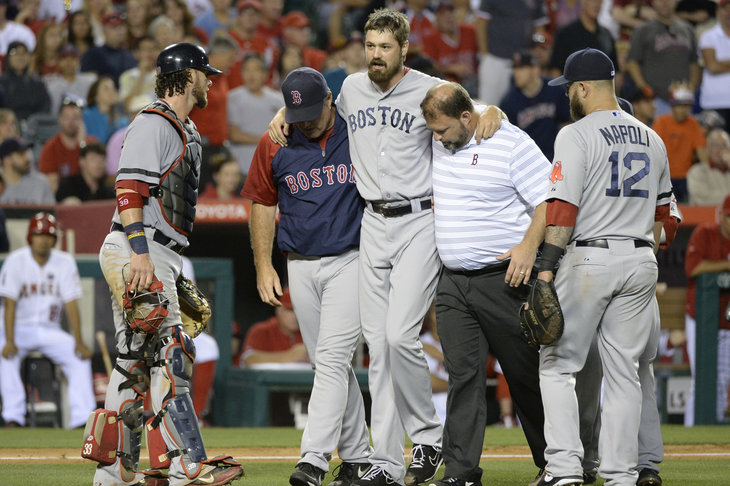 But "reasonable" is not a top-25 prospect. Jackie Bradley Jr. is the guy you hope will be playing 150 games a year in center field for the next six years, playing defense, getting on base, scoring runs. Bobby Parnell could pitch some big innings, but would be involved in some fraction of the games that Bradley would be, even in the games he plays in.

At some point there should be a middle ground where each team should be willing to deal. Parnell can be an impact acquisition, at least as far as bullpen pieces go, and the Red Sox could certainly use his help. The Mets, conversely, would certainly like to translate a good reliever into a piece or two that would last longer and fill a more important role than that of closer.

The question is: does someone else go over the top? Sometimes teams get desperate, and when they do, they might make that Jackie Bradley Jr. trade. Thankfully the Sox don't seem to be jumping at the opportunity to be that team, but if someone else does, that leaves the Red Sox out of the running all the same.