Share All sharing options for: The sustainable side of Jose Iglesias' success at the plate

Jose Iglesias has been one of the best stories of the 2013 Red Sox season. After years of wondering whether he could hit enough at the major-league level to carry his fantastic glove, Iglesias has managed a .410/.459/.528 batting line over 159 plate appearances this season. He played his way past a struggling Will Middlebrooks and into an everyday role at third base. Now with Stephen Drew on the DL, he has assumed the role that Red Sox fans have always hoped he would as the team's everyday shortstop.

As enjoyable as this ride has been, it has been hard to ignore just how unsustainable Iglesias's success appears to be. This is, after all, the same player who has hit .244/.296/.292 over three seasons at Triple-A. Iglesias is also currently sporting a .468 batting average on balls in play, which is more than 50 points higher than the best single-season mark of the last ten years, Ichiro's .399 BABIP from 2004. This knowledge has given Iglesias's remarkable turnaround a kind of uneasy, fleeting feeling.

It is true: Jose Iglesias is probably not going to continue to hit 71 percent better than league average all year. He isn't going to have every blooper land between fielders forever. He almost certainly won't out-slug David Wright, Andrew McCutchen and Yadier Molina for the rest of the year. Even though Jose Iglesias will have to stop hitting like Ty Cobb in the not-so-distance future, he is not necessarily doomed to being the same player that he was as a minor leaguer. Behind those ridiculous numbers, there are several signs that point to a real improvement in his hitting abilities.

Like many over-matched youngsters, Iglesias's first few encounters with major-league pitching found him unprepared for the serious upgrade in stuff that comes at the highest level. He struck out in 21 percent of his plate appearances in 2012. That might be a reasonable rate for a power hitter or a guy who can seriously grind out an at bat, but for a pure contact guy like Iglesias it was a major issue. Even when he was struggling at Triple-A, he was between 10-15 percent strikeouts. This season, he is striking out at 13 percent of the time, a far more manageable rate for a man of his skill set, and one more in line with his development.

Iglesias hits a lot of balls on the ground, and that is basically a good thing since he is fast and will get more infield hits than most other players because of it. Of course, ground balls also produce fewer runs per out, so at a certain point, too many grounders becomes a problem. Prior to this season, Iglesias hit grounders in 59 percent of the time he put the ball in play and of the 26 percent of batted balls that went in the air, 31 percent were pop-ups. It was a rough situation. Kids were chanting "easy out," the outfielders were in on the dirt, it was your basic little league nightmare. This season, he has turned four percent of those grounders into line drives and he has stopped popping up at such an extreme rate.

It might be easy to look at Iggy's six percent walk rate and dismiss him as a hacker. He certainly is not going to be confused with Kevin Youkilis, but this season, the young Cuban has become a much better judge of the strike zone and he is even willing to take the occasional pitch. His out-of-zone swing rate has dropped from 34 percent to 30 percent and his overall swing rate is down five percent. Such changes might sound small, but for these numbers, those types of discrepancies are beyond the range of normal variation. Iglesias still isn't walking much, but he is not helping pitchers out by swinging at pitches he can't hit either -- this, in turn, likely has helped cut into the aforementioned pop-ups.

These improvements are all extremely encouraging, but they don't completely capture the extent of Iglesias's transformation at the plate. Beyond the improved pitch recognition and selection that is implied by his strikeout and plate discipline numbers, the most noticeable difference in Iglesias' game has been his remarkable improvement in handling pitches away. This is clear when looking at his batting averages by pitch zones (care of Brooks Baseball) 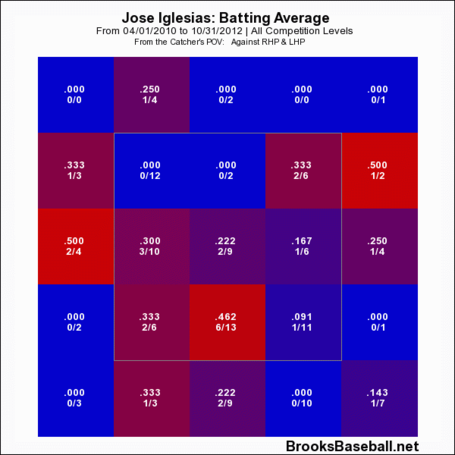 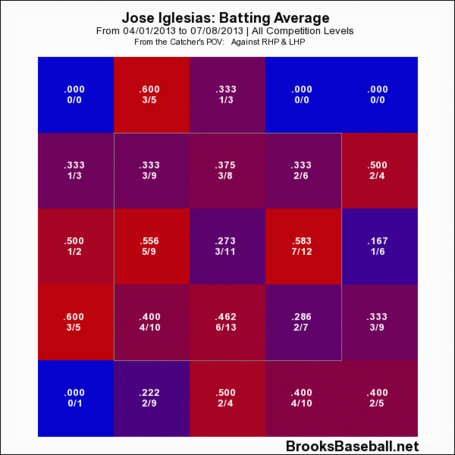 Prior to this season, Iglesias had some success handling pitches inside and up-and-away, but he was basically an automatic out for pitchers who could locate the ball down in the zone away. This season has been a different story. Iglesias is still seeing pitches low-and-away more than anywhere else, but instead of making weak ground ball contact, he has begun to square up these pitches and hit them to the opposite field with some authority. His line drive rates on these pitches are up and while he still hits plenty of them on the ground, that contact is of a much less weak variety. He has hit .410 on balls hit to right field this season, after hitting just .111 going the other way last year.

The Red Sox have one hitter who is particularly adept at going the other way with low-and-away offerings from the right side and his influence on Iglesias may be one important factor in this new-found effectiveness against these pitches. Dustin Pedroia took Iglesias under his wing after last season, inviting him to work out in his Arizona home and teaching him to play pepper. Pedroia talked about those training sessions with Peter Gammons, explaining that he told Iglesias:

"There is no way, in life, that you have hand-eye coordination like that and you can't hit. That's impossible. You just need to use it."

Whether this advice was actually the catalyst for Iglesias's change in approach or not, Pedroia's comment here speaks to something important about who the Red Sox young shortstop is as a player. For as long as most fans have known about him, Iglesias's excellent hands have been front-and-center in every discussion of his possible future. The skills that make him such an excellent fielder- his hand-eye coordination, his instincts for the game and his speed- are all assets at the plate as well. So far, in 2013, he is using them on both sides of the ball and it is paying off. Many of the numbers on his stats pages right now might not be sustainable, but the approach he has used this season is.