Checking in on three PawSox on the 40-man roster for the first time in 2013.

The Pawtucket Red Sox might not be loaded with top prospects -- though, they have their share of those, too -- but they are basically overflowing with depth pieces that have or could contribute to the big-league club. A few of these players have been lost in the shuffle for one reason or another over the first half of this season, but circumstances have a way of changing things. With that in mind, this week we'll start tracking three players on the Red Sox 40-man roster who, until now, haven't seen much attention, if any, in our weekly updates.

Hassan hasn't been included in the updates because he had to deal with a stress fracture in his foot before he could play in any games. He returned to the field in June, and immediately began to answer the question as to why he was protected from the Rule 5 draft by hitting eight doubles and a homer in his first 16 games with the PawSox. It's just a handful of games, so don't take that to mean this is who he is. It Hassan can develop some power, though -- and it's not out of the question, so long as he starts to use his lower half in his swing more often to generate that power -- then the Red Sox will be glad they have him.

Patience is hard to teach, and Hassan has it in spades. If he can tweak things just enough that he becomes even a doubles threat, then he'll have his uses on Boston's 40-man, and possibly as a designated hitter at some point. He doesn't need to turn into Kevin Youkilis or even Daniel Nava to be productive, but that's at least where the thinking resides here, in terms of a player with a high-quality approach figuring out his power a little later in the game. He's still a long ways from achieving that goal, but his return to Pawtucket is a start.

Butler was also added to the 40-man to be protected from the Rule 5 draft, because a catcher with solid defensive skills who can draw a walk is the kind of player who would be immediately snagged by another club. Butler was the backup catcher at Pawtucket until Ryan Lavarnway was called to the majors to fill in for the concussed David Ross -- should Lavarnway's bat not remain up to the task in front of him, Butler might find himself in the majors until Ross returns, leaving Lavarnway to continue his development in the minors.

The 26-year-old Butler isn't a great hitter, but his defensive skills are far superior to those of the still-learning Lavarnway. Plus, he has hit his share, even if the numbers don't pop out, and has actually been on a tear as of late. The backstop hit .263/.338/.456 in June, and is at .314/.385/.543 with a pair of homers, two doubles, and three walks over his last 10 games. With Butler playing this well, it's unlikely the Red Sox will have an opportunity to vacate his 40-man spot anytime soon without losing him to someone else. With him playing like this, though, that's not necessarily a problem for Boston.

De La Torre has been called up to Boston a couple of times, as he entered the season with all of his options, making him an easy piece to shuttle back-and-forth between Triple-A and the bigs. While he struggled with his control early on, as the 4.5 walks per nine on the year suggests, he's been fantastic at avoiding free passes of late: De La Torre has only allowed four walks total in his last 10 appearances and 17 innings, all while punching out 22 batters and inducing nearly twice as many outs on the ground as in the air. 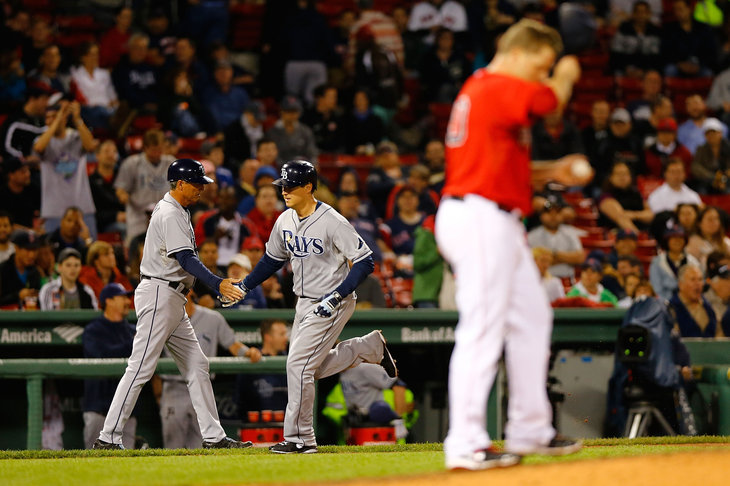 Though the names aren't the sexiest available, these five guys could bring value to Boston for cheap prices.

He's a piece who could fit into a big-league bullpen easily, but the Red Sox have so many players without options that, somewhat like Junichi Tazawa in 2012, there's just nowhere to put him except for Pawtucket at the moment. That's not to say you should expect De La Torre to turn into a high-quality setup man and potential closer, by the way -- it's just meant as recognition that he's very likely learned all there is to learn from Triple-A, but roster construction sometimes takes precedence over that.

Now that Clayton Mortensen has been designated for assignment and removed from the 40-man roster, though, it's likely De La Torre who will get the call to the majors the next time a multi-inning reliever is needed. He's pitched well enough to merit that role, and unlike Mortensen, can just be optioned back to the minors whenever the Red Sox are no longer in need of his immediate services.