That doesn't mean the Red Sox will trade for him, but it removes a preexisting barrier to doing so.

The Red Sox have dealt Jose Iglesias in the three-team Jake Peavy trade, meaning they have a spot opened up for either third base or the bench. That space could very well end up filled by the Phillies' Michael Young, as Ken Rosenthal reports that the third baseman has changed his mind and agreed to waive his no-trade clause for the Red Sox, instead of just for the Rangers.

This assumes, of course, that Boston remains interested -- the reports from Ben Cherington's conference call last night stated that nothing was imminent, but the presence of Brock Holt rather than Will Middlebrooks or Xander Bogaerts in the majors post-Iglesias suggests they're at least still looking.

Young has his flaws, and they're in the field. That being said, though, he's hitting .279/.345/.411 for the Phillies over 99 games and 403 plate appearances, while Red Sox third basemen have only managed a line of .240/.280/.388, nearly 20 percent worse than the league average third baseman. His defense is ugly, that's for sure, but playing alongside Stephen Drew instead of Jimmy Rollins would help, and it's highly unlikely that Young is the team's full-time third baseman if they get him, too. 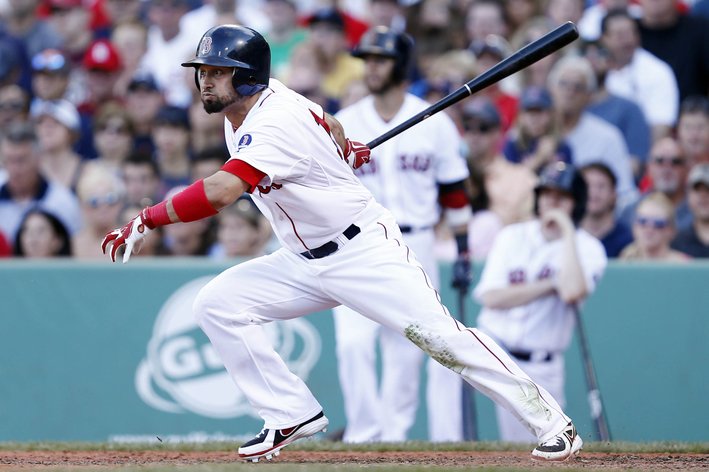 Now that the Red Sox have acquired Jake Peavy to sure up the rotation, they can address some less pressing issues.

It's more likely he's a bridge piece who replaces Brandon Snyder on the roster until such a time when either Will Middlebrooks or Xander Bogaerts are ready to join the big-league squad. Young would then head to the bench to fill in at DH, first base, or to take on the occasional lefty at third -- he's a career .310/.363/.467 batter against southpaws. Like with Jonny Gomes, Young would likely be a piece who can contribute on the field where he can, but will also serve as a significant clubhouse presence during the stretch run -- bash that all you want, but remember what things were like in Boston this time last year before the clubhouse purge. If the price to acquire that kind of influence is negligible, it's useful.

Again, Young is terrible defensively, and playing him full-time isn't a great idea, regardless of what Red Sox third basemen have hit to this point. But, if he's being used as a bridge to give Bogaerts and Middlebrooks more time to fight over who gets to be the savior at the hot corner, that's totally fine, especially given what should be a low cost in both dollars and players.