The Red Sox are pushing for Peavy with fewer than 24 hours to go before the trade deadline.

Update 10:47 pm: This is reportedly a three-team deal between the Red Sox, White Sox, and Tigers. Jose Iglesias is involved, according to WEEI's Alex Speier and Rob Bradford.

It is entirely possible Iglesias is headed to Detroit, given their shortstop, Jhonny Peralta, is reportedly one of the names on the Biogenesis list who could be facing a suspension.

Update 11:12 pm: It's Jose Iglesias heading to the Tigers, with two-to-three "lesser prospects" going to the White Sox, according to ESPN Boston's Gordon Edes. This likely rules out the likes of Anthony Ranaudo in the trade, and means the Sox are probably dealing from outside of their top-20, or maybe right around there.

Update 11:42 pm: The Red Sox are receiving Tigers minor-league pitcher Brayan Villarreal in the deal. He's in Toledo, and has no options remaining after 2013. Alex Speier is reporting that the Sox are expected to send low-level minor-league players to complete the deal, and has named Lowell Spinners second baseman and shortstop Cleulius Rondon as one of said players. He's a defense first (and probably second, too) infielder.

With the Red Sox unsure of whether acquiring Cliff Lee is a possibility before the trade deadline, attention has turned to right-hander Jake Peavy. Jon Heyman of CBS Sports is reporting that the Red Sox are "in serious talks" for the White Sox starter. 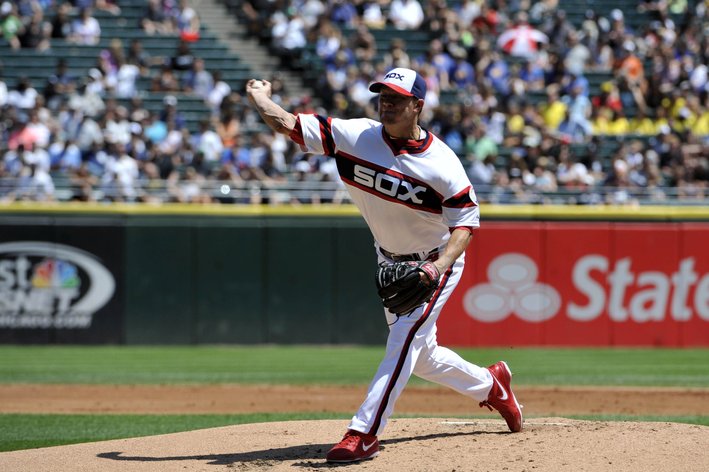 Boston might land a pitcher after all, assuming the price for Peavy is low enough to make it work. 

Peavy was slated to start on Tuesday for Chicago, but was scratched in order to further explore trade possibilities with teams like the Athletics, Cardinals, Diamondbacks, and the Red Sox. His price has reportedly come down since Monday as well, with the White Sox no longer looking for a combination of a top-50 prospect, someone to cover all of Peavy's remaining contract, and additional prospects to supplement the deal.

That's not to say Peavy will come cheap -- the top-50 prospect part is very likely still in play, but the requirements for the rest have maybe come down somewhat.

The Red Sox have been loathe to include the likes of Xander Bogaerts and Jackie Bradley Jr. in any deal -- and the latter has been reported to not be involved in Peavy negotiations -- but someone like, say, Anthony Ranaudo could be a fit for a Peavy swap. As the White Sox are attempting to move Alexei Ramirez and his contract in a trade before the July 31 deadline, someone like shortstop Jose Iglesias might also be intriguing to Chicago.