Red Sox trade rumors: Sox would give up 'whatever it takes' for Giancarlo Stanton

No one has been able to get the Marlins to give up Stanton, but the Red Sox are willing to try.

Share All sharing options for: Red Sox trade rumors: Sox would give up 'whatever it takes' for Giancarlo Stanton

Giancarlo Stanton is the great untouchable prize in everyone's eyes. The Rangers reportedly call the Marlins every week asking about his availability in the hopes of prying the 23-year-old away, and they're far from alone in terms of their desires. The thing is, few teams, if any, can give the Marlins what they would want for a cost-controlled superstar with Stanton's future. That won't stop the Red Sox from trying, though, as they reportedly are willing to give up "whatever it takes" to make Stanton a Boston institution, according to MLB.com's Joe Frisario.

The thing is, Boston's prospects might not perfectly match-up with what the Marlins are building. Even if they deal Stanton, their outfield might not have a place for Jackie Bradley Jr. given they already have Christian Yelich (Baseball America's #15 prospect), Marcell Ozuna (#75), and Jake Marisnick (#64), all of whom are younger than Bradley and have tasted the majors already as well. It's a little easier to find room for Bogaerts given his obvious talent, as he could move to third in favor of Adeiny Hechavarria, who isn't Bogaerts' equal, but is considered a superior defender at shortstop. In addition, Garin Cecchini's value to the Marlins is lessened a bit if he can't fit in their outfield or at third base.

Should the Red Sox call up top prospect Xander Bogaerts? 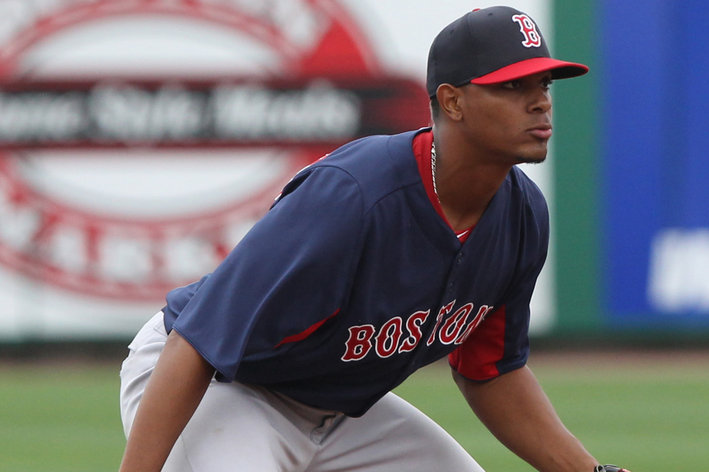 Boston is in need of some offense, but can their best prospect be the one who provides it?

The Marlins might be more interested in pitching according to Frisario, which the Red Sox have plenty of between Allen Webster, Anthony Ranaudo, Matt Barnes, Henry Owens, Rubby De La Rosa, Brandon Workman, Drake Britton, Brian Johnson, and on down the line. If the Marlins would be willing to take a package of pitching prospects for Stanton, there might be something to talk about here, but as has been the situation all year long, the Marlins just don't seem interested in moving Stanton now, not when they can still pull in a major package for him later.

Maybe nothing comes of Boston's desire before the trade deadline, or at all if they end up dealing for Cliff Lee before then, but their interest and the potential for a swap could be something that comes back up in the off-season. A lot of things would have to go right between now and then, of course, but they might have a better chance than anyone as things stand now.