For Jon Lester, one pitch has been the key to his success and his struggles this year.

Share All sharing options for: Red Sox starter Jon Lester rises and falls (and rises again?) with his sinker

As Jon Lester takes the mound Wednesday against the Padres, many Red Sox fans will be wondering just which Jon Lester will show up.

After six starts in the month of April, it looked like Jon Lester was on his way back to the form that made him a Cy Young contender in 2010. He had a 3.11 ERA and a 3.11 FIP for that month. He was getting nearly 50 percent ground balls while striking out hitters just above the league–average rate and walking them slightly less than the league average.

His success carried into May and on May 10, Lester had his best outing of the season, a near-perfect complete-game, one-hit, shutout against the Blue Jays. Instead of heralding the return of ’s left-handed ace to the upper tier of American League pitching, this game turned out to be the high mark of his season to this point. His next two starts were solid enough, but since that dominant performance, things have gone consistently downhill. His ERA has risen nearly two full runs and his FIP and xFIP have spiked up to above average rates as well.

The simple and obvious explanation for these struggles is a lack of control. From the start of the season through May 10, Lester walked 15 batters in 50-2/3 innings. Since that date, he has thrown 53 2/3 innings more and walked 24 batters. He walked 5.1 batters per nine in June, his worst rate since 2008, back in his first full season as a starter. During his early season success he was throwing his sinker 69 percent of the time, but since May 10, that pitch has gotten a strike 60 percent of the time. Just a brief glance at those sinkers mapped out by Texas Leaguers, makes this difference perfectly clear:

Lester threw 198 sinkers before May 10 and he has thrown 277 since then. The pitches from that early stretch are tightly concentrated in the zone, while the pitches since his near-perfecto have been far more erratic. Since sinkers don't generate many swings-and-misses, the pitches falling down away from the zone have little value. His strike percentages on his most used offering, the four-seam fastball, have remained fairly stable throughout the season, and his cutter has actually gotten more strikes, percentage-wise, during his recent struggles. The key difference has been in his sinker and, to a far lesser degree, his change up.

While his four-seamer gets a bit more use, the sinker may actually be the most important pitch for Lester. Of the 277 sinkers he has thrown since May 10, more than half have come on the first two pitches. This is fairly typical for him, and when the sinker is working well, this usage pattern is a major key to Lester’s ability to pitch deep into games. Sinkers give him ground balls and ground balls lead to quick outs and low pitch counts. With his recently reduced ability to locate this pitch, he is bound to begin an increasing number of at-bats behind in the count, leading to more pitches, which in turn forces Lester to return to the pitch in an attempt to get more quick outs as his pitch counts rise. So while his sinker has been less effective over the past six weeks, he has actually gone to it more, throwing it 29 percent of the time in that run, compared to 23 percent prior.

While identifying the cause of Lester’s recent struggles is not particularly difficult, finding the fix may be a bigger challenge. The Red Sox seem to believe that a mechanical issue is at the root of the problem and that certainly sounds like a reasonable theory. At the end of April, Doug Thorburn of Baseball Prospectus had an excellent take on Lester and Buchholz’s improved mechanics under John Farrell. Thorburn noted that one of the key improvements for Lester early this season was his improved momentum. It seems to me that this is the most likely mechanical culprit behind Lester’s recent struggles. He is one of the more consistent pitchers you will find in terms of things like arm slot, posture and balance, but he can tend to slow down his motion from his foot plant to his release, making it more difficult to locate the ball down in the zone consistently. 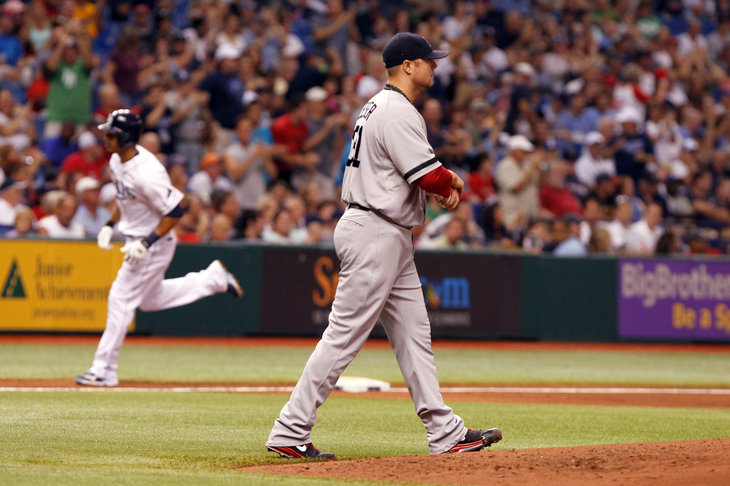 Things are not all doom and gloom, however. Lester’s last start was not necessarily impressive in simple statistical terms. He went seven innings and allowed four runs on five hits and three walks while striking out five. That is solid enough and with the Red Sox offense, it gives him a good shot at the win most nights, but it is still a long way from what Jon Lester can do when everything is working right. Even so, this start featured some important evidence that Lester is figuring things out and may be back to his dominant ways in the near future.

In this start, Lester’s sinker was probably his most effective pitch. He threw it 23 times and though it did not generate a single whiff, between called strikes, foul balls and balls in play, it went for a strike 74 percent of the time. He was able to get two double-plays on ground balls and just one of the five hits went for extra bases. Of the four singles, three were ground balls. Over seven innings, he threw just 95 pitches as well, giving the start very high marks for efficiency after two straight starts under six frames that required more than 100 pitches each.

Not only was the sinker more effective than it had been in recent outings, but Lester’s control was stronger than his line reflects. After walking Jose Reyes to start the game, Lester walked just one batter through seven innings. That batter was Jose Bautista, and Lester induced an inning-ending double play in the next at-bat. His third walk came against the last batter he faced and he was removed mid-at-bat with a hip injury after throwing three straight pitch out of the zone. For the majority of this game, Lester was very much in control of the zone.

The month of June is behind us now, and hopefully Jon Lester’s struggles are as well. He may never quite return to being the pitcher who led American League starters in strikeout rate from 2009-2010, but the player he was at the start of this season is certainly good enough to lead the Red Sox rotation. If his sinker is truly back, it is likely that he is going to be that pitcher once again.