Jonathan Papelbon did not go to Philadelphia to win

Jonathan Papelbon says he came to Philadelphia to win. That's not quite how we remember it.

Share All sharing options for: Jonathan Papelbon did not go to Philadelphia to win

Old friend Jonathan Papelbon has once again made his way back into the news, and unsurprisingly, it's because he's talking.

When asked by MLB.com's Todd Zolecki about the direction the Phillies were headed in after a lengthy losing streak, Papelbon responded with the following:

"I definitely didn't come here for this."

"I would like to stay [in Philadelphia]. But if I'm going to have to put up with this year after year, then no, I don't want to be here. Why would you? Why would anybody?"

Sure, the Phillies were an attractive enough landing spot at the time, fresh off a season that saw them win more than 100 games (although anyone paying close enough attention could point out the risks of their aging, expensive roster). But Papelbon was never shy about telling anyone and everyone that his goal was to set a new bar for free agent relievers. That was why he went year-to-year with the Red Sox even when they approached him time and again with offers of an extension. That was why the Red Sox did little more than their due diligence in attempting to re-sign him. 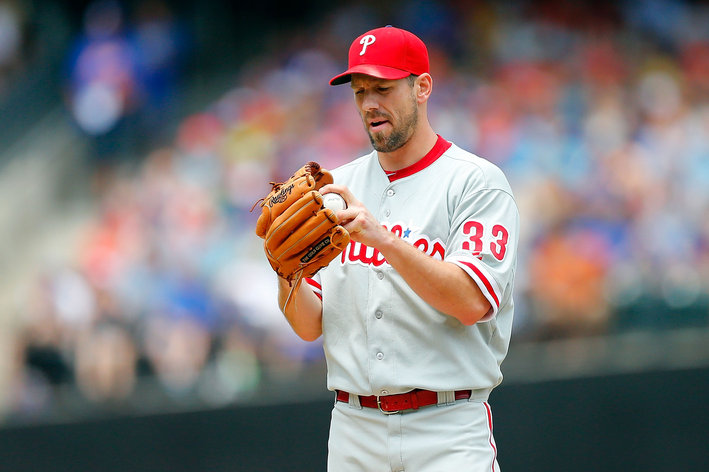 Effectively ending any realistic discussion of a Cliff Lee trade to anyone in baseball.

Now Papelbon is losing, and apparently $12.5 million a year is not enough of a salve for him to keep his comments to himself.

Maybe he gets his wish and finds his way to a winning team (because that whole last-to-first overhaul he's looking for requires a Dodgers-sized miracle). Maybe his comments are what inspires Ruben Amaro Jr. to break from his usual tactic of asking for the world and pretending the Phillies are contenders. Maybe they even take some of the money just to get the disgruntled employee out of the clubhouse.

Just as likely, though, is that Papelbon will be stuck in Philadelphia. And if he is, irony of ironies, it will probably be his large contract--in conjunction with a declining fastball and strikeout rate--that keeps him there.