Effectively ending any realistic discussion of a Cliff Lee trade to anyone in baseball.

So, remember earlier on Monday, when it seemed like the Red Sox and Phillies would be a fit for each other in a trade for Cliff Lee? Not so much, if what Jon Heyman of CBS Sports is reporting is true. Reportedly, Ruben Amaro is asking for "three or four" of a team's best prospects for Cliff Lee, while also expecting Lee's new club to absorb 100 percent of Lee's salary.

Going to give you a minute to let that sink in.

Asking a team for three or four of their best prospects for Lee isn't an issue -- after all, this is Cliff Lee we're talking about. Asking a team to absorb all of the remaining money on Lee's two-plus seasons (and 2016 option) isn't a problem, either. Asking for both of those things together is absurd, though. Ponying up all the money for Lee's deal is a way to lessen the prospect cost of a Lee acquisition, and asking the Phillies to cover some of the cost is a way to get better prospects. The two do not go hand-in-hand, unless Amaro's only goal is to sound like he understands how valuable Lee is by asking for, almost impossibly, more than he's worth in return. 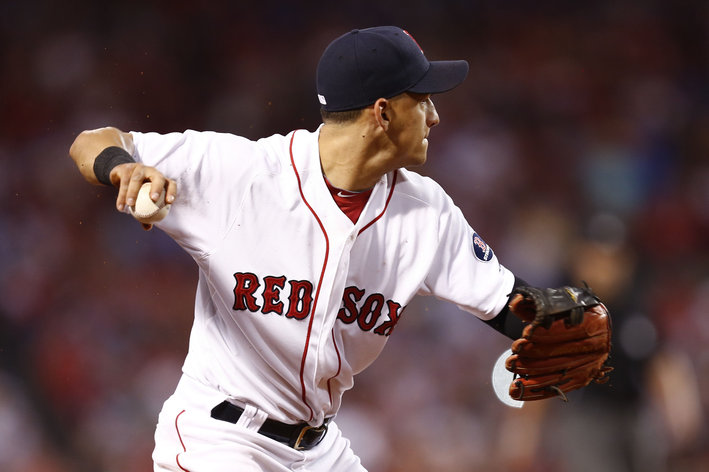 Given the awful return he had for Lee the last time he dealt him, I can understand wanting to prove you've learned something over the years.

So, for the Red Sox, this would mean Amaro expects Boston to pay the remaining money on Lee's 2013, as well as another $50 million over the next two seasons, and should it come up, his 2016 option for $27 million that includes a $12.5 million buyout and can vest automatically based on innings thresholds. In addition to all of that, they also expect the Red Sox to give up, let's say, Xander Bogaerts, Jackie Bradley Jr. Garin Cecchini, and then someone like Henry Owens or Allen Webster. Maybe it's a little less for the Sox, given the quality at the top of their system, but still: Bradley, Cecchini, and Webster is not a deal the Sox should be making, especially not while absorbing all of the money.

Amaro could just be talking a big game in the hopes of only having to deal with the Most Serious potential trade partners over the next few days, but then again, it is the Phillies, so this could also be the end of any discussions for Lee. Luckily, there's only about 50 hours left before we know which way this is all heading.

For what it's worth, the Sox are not into this at all, according to the Boston Globe's Nick Cafardo. So we might not even have to wait 50 hours to find out.