The cost for Peavy will be a high one for Boston if Chicago gets their way.

White Sox pitcher Jake Peavy is scheduled to start on Tuesday, but from the sounds of it, he won't ever make that start. According to ESPN's Buster Olney, Peavy is the #1 pitcher remaining on the market, since Cliff Lee and Ervin Santana very well might not be dealt, and the price to acquire the right-hander is going to be "major league ready" pitching. There are obvious issues with this.

How many teams who need pitching in the majors have major-league ready pitching talent sitting around in the upper minors? It's a short list, and that's the limited market the White Sox are going to have to deal with if that's their specific goal. The Red Sox, who are interested in Peavy, do have the chips to get a deal done, but whether they will is a different question entirely.

MLB trade deadline: Which prospects should the Red Sox trade? 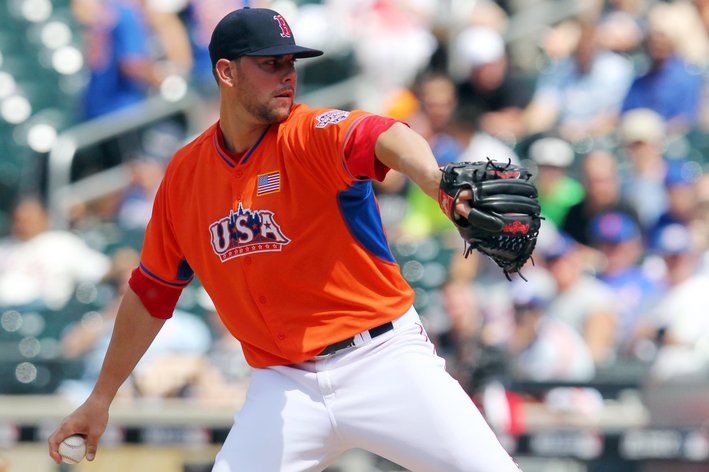 Little comes for free at the trade deadline, so who should the Sox be willing to deal?

As Olney mentions, the Sox have built a substantial farm system with trade chips that include pitching prospects, but they might just hold on to that and go with what they've got rather than deal it for Peavy. There is definitely a need there, with Clay Buchholz out for another month or so and Ryan Dempster pitching through groin soreness for parts of 2013, but that doesn't mean they'll give up their potential future to fix the present, not when parts of that future could be used in lieu of Peavy.

Now, if the White Sox are willing to talk about Anthony Ranaudo -- who is in Double-A -- rather than the likes of Triple-A kids Allen Webster, Rubby De La Rosa, and Brandon Workman, who is in the major-league rotation with Buchholz out, then Boston is likely more willing to listen. Ranaudo doesn't necessarily factor into 2013's plans, and while he could factor into future ones, so too could the rest of the bunch, and there are only so many rosters spots to go around. Whether or not the White Sox would go for it depends entirely on whether anyone else is willing to match their expected price, of course.